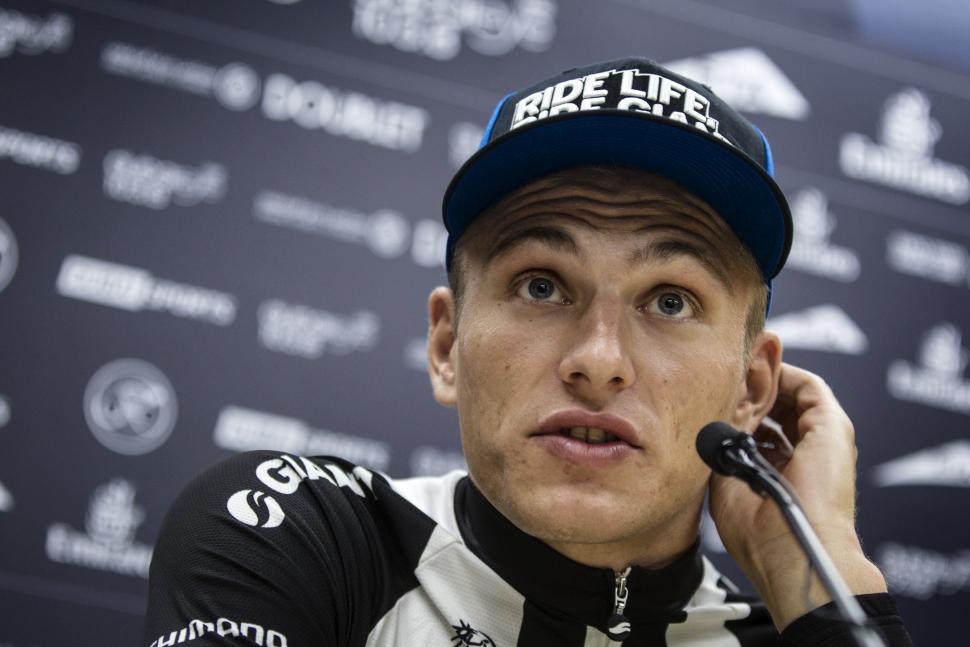 Giant Shimano sprinter Marcel Kittel, who won four stages at last year’s Tour de France, says he expects the opening two days of this year’s race to be “very dangerous” for the peloton.

The German was in Yorkshire with his team earlier this week to reconnoitre some of the route of Stages 1 and 2 which run, respectively, from Leeds to Harrogate and from York to Sheffield. There’s video below of them tackling the toughest gradient they will face in Yorkshire, at around 30 per cent on Sheffield’s Jenkin Road.

The opening days of any Tour de France are always fraught and crashes are inevitable. First-timers speak of their shock at the speed of the peloton, even compared to other major races.

There’s a fight to be near the front not only among the teams looking to contest the day’s sprint, but also those with GC contenders to protect and who don’t want his race to come to a premature end through an opening week crash, as happened to Sir Bradley Wiggins in 2011.

Add that nervousness felt by 198 riders to some of the roads that the Tour will encounter on the opening two days and it’s a potent recipe for incidents to happen, as Kittel, who won the opening stage of last year’s race on Corsica acknowledges.

After one of his rides in Yorkshire this week, he told the BBC: "I think the roads are in some parts very dangerous for a peloton of the Tour de France.

"On the descents when you ride through the more lonely roads in the middle of nowhere they are very narrow and very small with stone walls on both sides, so [when] a very nervous Tour de France peloton fighting for the yellow jersey passes by there can be a very dangerous situation."

Kittel and his Giant-Shimano team, including John Degenkolb, weren’t just in Yorkshire to see the countryside. Here they are tackling the last of the climbs that feature in the finale of Stage 2 in Sheffield, a hill on a residential street charmingly referred to in the official race route as the Côte du Jenkin Road.

It’s short – 800 metres - but brutal, with a maximum gradient of 30 per cent, and it should be the setting of some fireworks come the afternoon of Sunday 6 July.

There’s much more here on VeloViewer about the climbs on the latter half of Stage 2, together with a rather arresting picture of Jenkin Road itself from Google Street View.

In the comments to that article, a cyclist who lives at the top and who rides to work most days says: "I have ridden up my road 5 times in 3 years, on the 4th time I got up without stopping, did it once more to prove it wasnt a fluke and go 5 miles out of my way to avoid it."

"They have been designed by the race organisers to provide a technical challenge to the peloton as befits the best cycle race in the world.

"We would encourage the other teams to follow in the footsteps of Giant-Shimano in coming to Yorkshire to recce the routes in advance so technically and tactically they are fully prepared come 5-6 July."