Vincenzo Nibali is, as most of his Astana teammates at the Tour de France are, riding the new Specialized Tarmac. The team leader gets a very special paint job however and it easily stands out from the standard team issue bikes, courtesy of its blue glitter finish and shark design around the head tube. Reminds us of the "Shark Teeth" nose art used by the US airforce on its P-40 Warhawks aeroplanes during the Second World War. 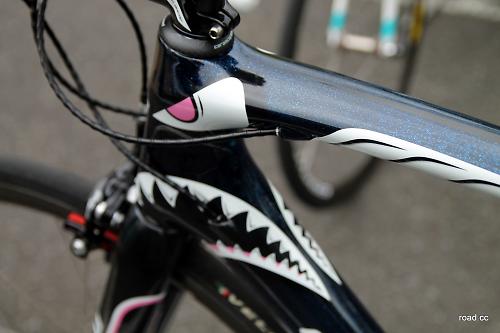 A shark you say? Yep, quite a few professional riders have nicknames and Vincenzo Nibali is often referred to as the ‘Shark of the Strait’ or more simply ‘The Shark’. So there you go, a pretty cool nickname and an equally cool paint job. The  2010 Vuelta a España and the 2013 Giro d'Italia winner is one of the favourites for the Tour de France overall, but a less than impressive performance in the Dauphine, where he couldn’t live with the fast pace set by Chris Froome and Alberto Contador, casts some doubt over his candidacy for victory. 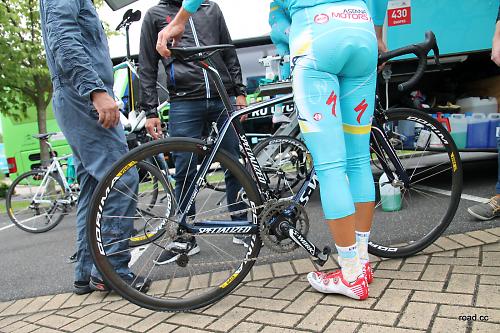 Aside from the special paint finish, which we spotted on two bikes outside the Astana team truck, the bike is the same new Specialized Tarmac that was launched very recently. Manufacturers obviously see the Tour de France as a huge marketing opportunity for showcasing new bikes, but we know a lot of professional riders dislike riding new and unproven bikes in such an important race. 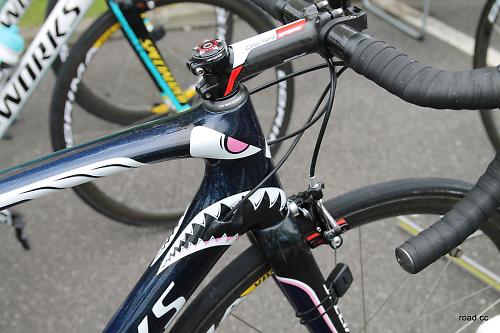 We assume, since Nibali, is riding the new Tarmac in the Tour, that he and the rest of the Astana team have had plenty of time in training on this new bike. That said we did happen to be outside the team truck when Nibali returned from a ride on Wednesday afternoon and immediately plunge into deep discussion with two team mechanics. Now our Italian is a little rusty so we couldn’t pick up what he was saying, but he seemed to have some concern with an aspect of the setup and in particular the brakes. We’re sure it’s just teething issues and him being a bit fussy about his new bike. 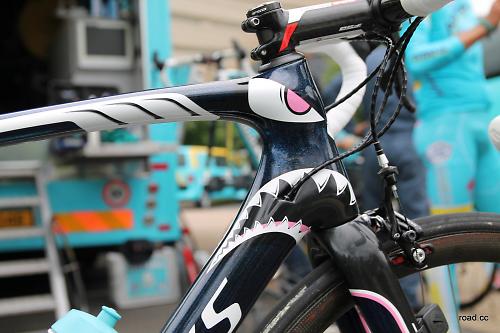 To save us going into detail here, you can read about the new Specialized Tarmac in this first look article. 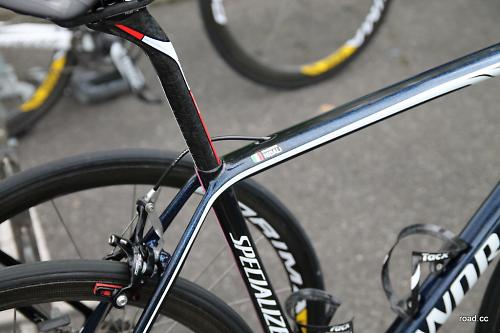 Anyhoo, aside from the spectacular paint job, Nibali runs the same specification as the regular Astana team bikes. That means in his case a Campagnolo Super Record mechanical groupset, in fact most of the team bikes were running the same groupset, and not the newly released updated version, but the groupset that has been around for a couple of years. Last year almost all the Campagnolo teams were riding EPS, the electronic version of the company’s groupset, but we spotted a lot of mechanical this year at the race.

We can only assume the reason for the older Campagnolo groupset, and not the brand new version, is due to supply from the Italian company or simply the team didn’t want to switch over to the new groupset at this stage in the race season. As much as you see a lot of the latest kit at the Tour de France, the huge pressure does mean you often see a lot of tried-and-tested kit. The only deviation from the Campagnolo groupset is the Specialized S-Works carbon crankset the 53/39 chainrings are mounted to. His arms, his crank arms we mean, measure 172.5mm. 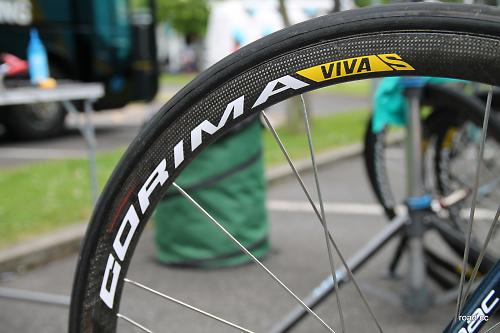 Elsewhere on the bike the Corima wheels are a rare sight, and Astana are the only team to ride these wheels. Nibali’s bike was shod with the company’s Viva S wheelset, a 32mm carbon fibre rim with a 22.6mm width, a trend we’re seeing a lot on the latest carbon rims, with a claimed 1,190g weight. 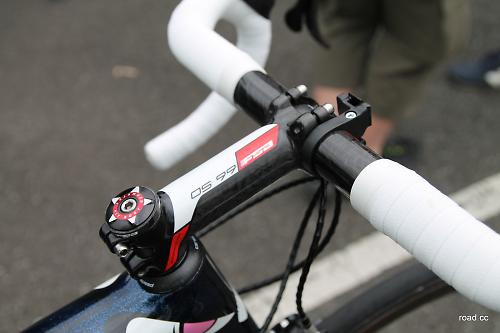 A full complement of FSA carbon fibre handlebars, stem and seatpost was fitted to his bike. The 13cm OS-99 stem had the thinnest sliver of a spacer below it with a 5mm spacer above it and a Specialized Body Geometry stem cap. His bars were wrapped in white Specialized bar tape and interestingly, all the Astana bikes had FSA stickers applied to the front of the handlebars, actually on the bar tape. Now we don’t recall seeing this before but we’re informed it’s fairly regular practise. We were surprised how flush the stickers were sitting on the tape. 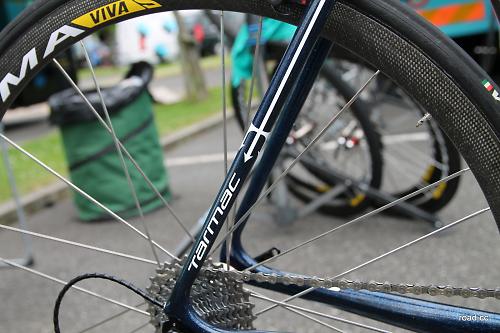 Tyres are Veloflex Carbon tubulars, 23mm width so going against the 24 and 25mm width trend we noticed across all the team bikes we’ve been looking at. These tyres have a claimed 260g weight and 320 TPI (threads per inch) construction. 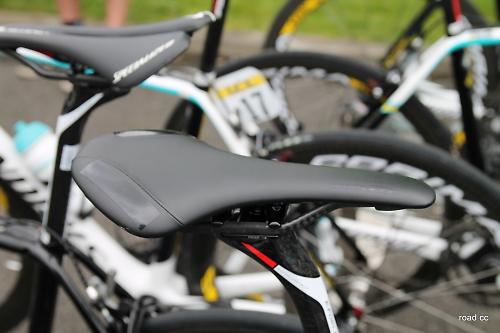 What’s his saddle? Despite the black electrical tape and marker pen action, it’s clearly a Fizik Antares. The rest of the team are all on Specialized saddles, but Nibali must clearly not get on with any of them and has requested, quite strongly we would imagine, that he wanted the Antares saddle. So its identifying logos have been taped over. We used to see a lot of this sort of thing but with most companies producing a wide range of saddle shapes for their pro teams, it’s much less common. 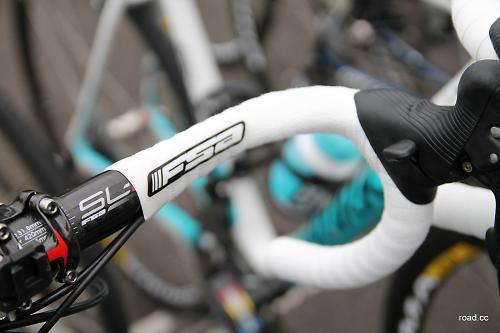