We featured the launch of the Comtat brand back in November and one of their bikes has just landed in the office. It's the Télégraphe, which is one of the more race-oriented models. Comtat describe it thus: "A very aggressive geometry and super stiffness in the bottom bracket means this has a true racing pedigree be it climbing or sprinting", and it's a great-looking machine in the flesh.

Comtat is a new brand but there's two years of research behind the bikes. All the framesets are manufactured in the Far East: Comtat don't have an R&D department but they've worked closely with factories in China and Taiwan to put together an interesting range, and all the bikes are assembled by hand in London by experienced mechanics. Our first impressions are of a bike that's tightly built (by Ben Thomson, apparently) and completely free of squeaks and rattles; no problems so far. Adam at Comtat told us that he'd spent many, many days poring over the standard bike specs to put together a package that offers a good mix of performace and value. And it's hard to fault his choices: our Télégraphe comes with the standard spec and it's certainly good value. For £1,799 you get a full Centaur Carbon groupset, Fulcrum Racing 5 wheels, 3T Carbon 'bars and seatpost and Conti GP4000 tyres. You even get two of Comtat's excellent bottle cages thrown in. If you want SRAM running gear then a Force-equipped machine is a quid under two grand, and Dura Ace will cost you £2,400. 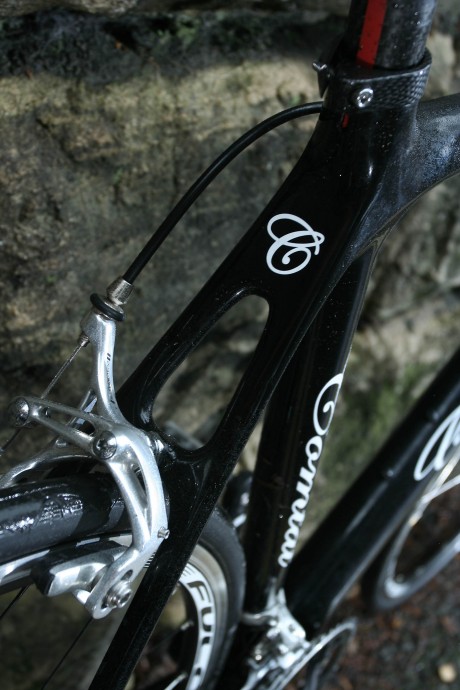 The frame itself is very well finished in 12K Carbon weave, with classy understated graphics. In terms of shape it puts us in mind of the Cervelo R3 - certainly the wafer-thin rear seatstays mated to deep chainstays and a beefy front triangle promises to give good power transfer and a bit of buzz-soaking ability – it's too early to comment on that, but don't worry. we'll give it some proper miles and tell you what's what. Comtat's website states that the unpainted frame weight is a light-but-sensible 1000g, and the full bike should weigh about 7.55kg (16.6lb). Ours is a big frame but even so it was only about 50g heavier than that. That's pretty good for a £1800 bike, okay it's not quite as feathery as the Boardman we tested recently, but spending a few quid extra on speccing a lighter wheelset would remedy that. Other features include an asymetric head tube with a 1.5" lower race (seemingly almost the standard now) and internal cable routing along the top tube. Geometry-wise, our 58cm test model has an effective top tube of 56.8cm according to the Comtat website, which is a touch shorter than you might expect, but the cockpit didn't feel crowded on first riding, the fairly generous stem probably helps. Look out for a review in the new year; you might even see the Télégraph in the flesh (and get a quick go, if it fits) if you're coming along to the road.cc turkey sweater on the 29th December...