Comtat London is a new high end carbon bike brand with an emphasis on stylish performance machines, the wrinkle is it's British and selling them at affordable prices. The company is the brainchild of Adam Roberts, a dedicated cyclist who used to work as a retail buyer for Woolies. When the big W shuffled of to the High St in the sky he decided to turn his passion for cycling in to his business and put his buying skills to work.

The result is Comtat London, which launched this month with a range of four carbon road frames: the Sablet, Tourmalet, the range-topping Telegraphe (coming soon) and the Bedoin – three different flavours of race bikes plus a high end sportive model. They may be affordable – frame prices range from £699 to £899 – but they certainly don't look cheap. Comtat have cleverly opted for just two colour options to start with, either black or white. It's all very clean, but a distinctive edge is added by the inlay graphics on the fork legs. Looks are a subjective thing but to our eye the Comtats do look much classier than their price tag suggests.

Comtat offer a bike builder facility on their site which lets you spec the build you want and means that you can custom build a bike across a wide range of prices – from £1400 right up to £5000 – and that's complemented by a very thorough fitting guide to help you choose the right sized frame. All bikes come with a £35 delivery charge and all are pre-built and checked over by a top level cycle mechanic before being despatched.

So, how does a company manage to sell high end bikes at such affordable prices? Well, there's no great secret. First, as their site points out, they are selling direct so that cuts both distriubutor and retailer margins out of the equation and second, Adam has used his buying skills and his cycling experience to source the best OE frames he could find in Taiwan.

Essentially it's buying “off the peg” so somewhere else in the world there are some very similar top end bikes… with a different paint job and a different name on the head badge and, it has to be said, some rather different price tags too. Buying this way is a common practice in the bike industry, many well known bike brands do exactly the same. The skill is in getting the right frames and how you finish them. Comtat hopes to score on both counts with the best frames and a distinctive and stylish level of finish.

We will be testing a Comtat very soon, but in the meantime let's take a quick look at the bikes in the 2010 range. 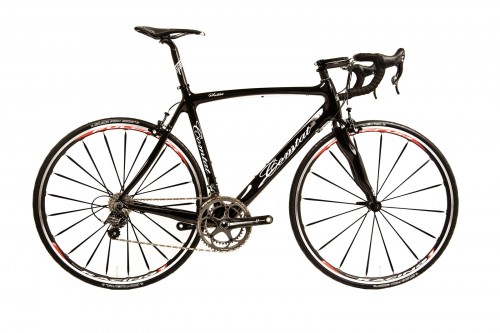 The accent here is very much on comfort and smoothness and bump absorbtion, this is Comtat's all day riding bike. It's available either as one of a multitude of complete bike options or as a frame and fork only package at £699 which weighs in at a combined 1475g which works out at just over the kilo for the frame on its own. Like all of the range the Sablet is made from 12K weave carbon and is a monocoque front triangle with the rear stays glued on – standard stuff for a lot of top end carbon frames these days. The Sablet frame is a rounded curvy affair and that theme continues with the front fork which, judging by the pics, has an even more pronounced kink than that favoured by Pinarello. The Sablet is available in four sizes: 50cm, 52cm, 54cm, 56cm. A more classic looking affair than the Sablet, but again made from a 12K carbon weave, the accent here is on balancing comfort and stiffness to give the sort of all round performance bike that is equally at home on a sportive or being raced, or simply having a weekend blast on. Claimed frame and fork weight is slightly less than the Sablet at 1425g… so we are talking slightly. Again there are four sizes available but this time it's 48cm, 51cm, 54cm, 57cm. The frame and fork package costs £699. 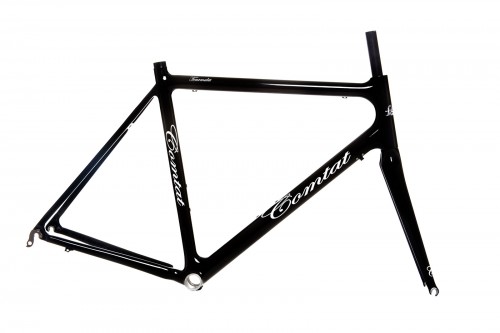 Billed by Comtat as a frame for “slipping up climbs” the Tourmalet is the same weight as the Bedoin and available in the same four sizes. The difference here is that it represents the other side of the balance between stiffness and comfort. While Comtat are keen to point out that it is still comfortable enough to be an all-day riding bike, this is more of an all round race machine as well as its climbing prowess Comtat claim the Bedoin is also stiff enough to get the power down in sprints. Frame and fork only price is £725. 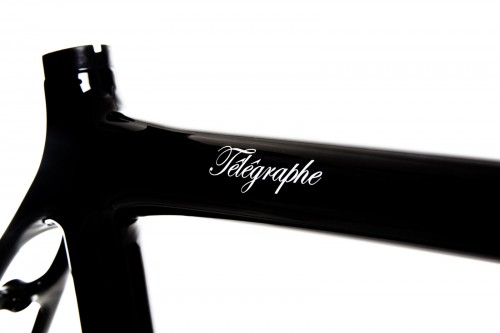 Lightest and stiffest bike in the Comtat range – we will be testing one soon – the Telegraphe is Comtat's take on bikes like the Cervelo R3 and the Cube Litening – a light, fast, nimble race machine. At £899 for the frameset it's also the most expensive model in the Comtat range. Sizing is the same as the Bedoin and Tourmalet and it will be available in two weeks – all Comtat's other 2010 models are available now.

All Comtat's bikes come with a £35 delivery charge and all are built up to by an experienced bike mechanic. As well as carbon frames Comtat London are also offering their own range of carbon bars and bottle cages and Comtat kit too. There's also a Comtat Cycling Club, Comtat CC, which rides most Sundays and most Saturdays. In fact the club has been going for longer than the bike brand.

And the name? In 2007 a cycling club with no name made their first trip to France and stayed in the village of Serignan du Comtat, it was so good they named the club after it, and then the bike brand too. Oh, and while some people might say Comtaa, the people who live there say Comtat and so do the team at Comtat London.