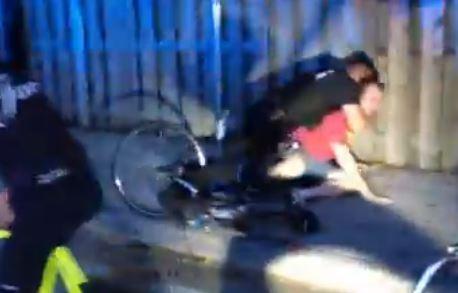 A policeman in Fort Lauderdale, Florida, has been accused of using “excessive force” by a cyclist taking part in a Critical Mass ride who was knocked off his bike and wrestled to the ground by the officer. Another cyclist who was not taking part in the ride has described how he was forced off his bike by a police motorcyclist.

The incident took place on Friday 31 May, with footage subsequently uploaded to YouTube. It was the first time police had decided to use officers in cars and on motorcycles to seek to control the monthly ride.

The cyclist, 30-year-old accountant Dan Littell, said that the presence of police cars among the riders was dangerous and he had moved in front of one of them to try and make the driver slow down.

Quoted on NBCMiami.com, he said: "I yelled, 'Please slow down, we're on bikes here’."

When that didn’t happen, he ride in front of the police car. He explained he had done so "to block them to slow them down, because they weren't slowing down. They were driving recklessly."

Fort Lauderdale Police dispute his version of events, however. A spokeswoman said: "Keep in mind just because an officer is captured on video using force, that footage alone is not conclusive that the officer’s actions were not justified,

"Obviously, the video in question does not capture all of the events that took place leading up to the physical arrest, and we ask that the media and the public not make premature conclusions."

Police insist that prior to the cyclist’s arrest, he had been confrontational towards officers, including giving them the middle finger.

He has since been charged with obstruction, failure to obey a law enforcement officer, improper lane change, failure to yield and impeding traffic.

It wasn’t the only incident involving a police vehicle on the evening. One cyclist who was not even taking part in Critical Mass – he was commuting home from work – was knocked off his bike by a police motorcycle rider.

According to a blog post on the Broward-Palm Beach website, 23-year-old Rahim Benjamin was riding through Victoria Park when he came across the group of 900 cyclists.

He says that when the officer ordered him to join the group, and replied: “"I'm not in the Mass! I'm turning just up ahead."

The rider said he moved to the left-hand lane, which had been closed to oncoming traffic and had almost reached his turning when the police officer on the motorbike turned sharply across him, forcing a collision.

Witness Christopher Lloyd, a neighbour of Benjamin’s, said: “Ra got up screaming and shouting, and I stepped in there and pushed them apart.

"A female officer showed up on the scene and started responding very professionally. She nodded her head and gave me the OK to calm him down before she engaged him again."

Benjamin has been fined for failing to obey an instruction to change lanes, but plans to contest it. He claimed: "Once I was off my bike, he [the officer] grabbed me and just chucked me.

"I was just going five miles per hour more than the pace of the ride, so that's kind of frightening.

He added: "I have to deal with idiots on the road all the time, and someone wearing a badge doesn't know that if he touches a 150-pound kid on a 20-pound bike with a motorcycle that his life might hang in the balance?"