Riders' verdict? Tough but not impossible — but M1 closure prevented return to London inside 24 hours...
by Simon_MacMichael

Three men in their thirties took on Stage 1 of the Tour de France in Yorkshire this weekend to raise money for charity — and they did it riding Boris Bikes. Their verdict? It’s tough, but not impossible.

With the bikes tipping the scales at well over twice the weight of the ones that will be ridden by the peloton on the stage from Leeds to Harrogate on 5 July, it was a tough challenge for the three riders, Dave Barker, Dave Parkes and Andy Sloan, supported by their friends Lewis Baguley and Pog Pattison. Andy told road.cc: "I worked for the GB Rowing Team during London 2012 and you can feel the same sort of buzz brewing in Yorkshire now ahead of the Tour. It's going to be quite a show and we've certainly got a new-found respect for the riders and for the Yorkshire Dales."

On the Boris v Le Tour website, the team says: “On 31 May 2014, we thought it might just be possible to haul a 50lb Boris bike a daunting 190km around Stage 1 of the 2014 Tour de France in Yorkshire, over hill and dale, and get it back to London in 24 hours with every donation adding fire to our bellies. “It turns out that endless 17% gradients combined with 204km of riding (not the advertised 190km!) while on a 50lb bike with three gears is rather tough — though as it turns out not impossible.

Similar to another Tour de France-related Boris Bike exploit we reported on last year, when Rob Holden and a pair of friends picked up one of the bikes in London and drove to Mont Ventoux to tackle one of cycling’s most famous climbs, the team were aiming to get the bikes back to London within 24 hours.

Sadly, that plan was scuppered by the M1 being closed as they headed back south, meaning they were 40 minutes outside the allotted time, and leading to the appeal – “please don’t fine us!” The ride was undertaken to raise money for MacMillan Cancer Support, as the Boris v Le Tour website explains: “In May 2013 Andy's father-in-law, Andy Vargo, was diagnosed with liver cancer - and within three months he was gone, just weeks before his first grandson was born.

“In March 2014 Pog's uncle, John Pattison, died after a long battle with a brain tumour.

“The phenomenal care provided by the nurses and staff at Macmillan Cancer Support helped both families a great deal during those long weeks and we want to raise as much money as possible to help them support others. 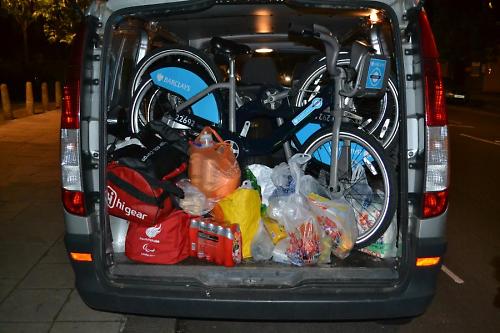 “Be it a phonecall, a visit, a wheelchair; each and every additional intervention is a godsend to the family and friends trying to cope with the physical traumas of round-the-clock care as well as the emotional shock of the situation.

“The ride is also in support of Ruth Hayllar, mum of three, who survived bowel cancer in 2011 before being diagnosed with inoperable bowel cancer again in October 2013. Please read her blog, The Pooh Stick Queen, and share your support.”

Donations can be made via Justgiving.com, or by texting "HARD65" plus the amount you want to donate – for example, "HARD65 £3" – to 70070. If you wish to donate more or less, simply change the number after the pound sign.

We’re told that there is a video on its way, and we’ll let you know once it’s available.