Blazing June is upon us and with it comes the new Vulpine 2014 summer range boasting updates to favourite items and new gear designed for coping with the heat while looking stylish both on and off the bike.

As ever all the new items are available in men’s and women’s versions, with Vulpine keen to emphasise their “no pink, no shrink” commitment to women’s cycling which includes their headline sponsorship of the Matrix Vulpine women’s cycling team. Oh, and there’s no pink in he men’s range either but then I suppose other clothing companies have that covered.

Looking at the new summer items as a whole one thing that immediately jumps out is that they aren’t as expensive as their equivalents in the standard range.  Vulpine have taken the decision that clothing designed to cope with heat doesn’t need to use the more technical fabrics needed to deal with the full range of British weather - so out goes the Epic Cotton and Merino and in comes light weight poly-cotton poplin and Dri-Release fabric (a mixture of polyester and natural fibres with an odour resisting treatment).  Instead they’ve concentrated on the cut and design and passed the saving on to the consumer.

Yes, okay the British summer is not exempt from the full range of British weather either, but the sun does come out and although we haven’t tested it this does look like there’s plenty of the versatility needed to cope with a British summer on and off the bike. 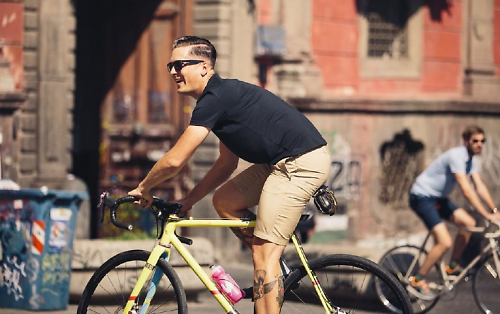 Simplified but still cyclified, say Vulpine, version of their £115 Epic Cotton Rain Short designed to work well on the bike but look good off it too. Vulpine say these will be ideal for urban riding, touring, and casual riding in mild to hot, dry weather. 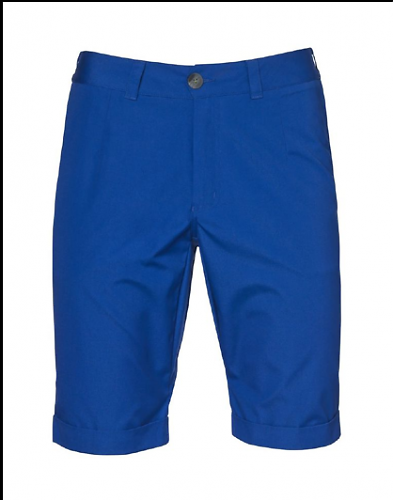 So you get two zipped pockets, and a diamond pattern gusset that means you aren’t sitting on a seam when you’re in the saddle. There’s a second internal fly button to hold you in - the fly is zipped, you don’t want to be undoing a button fly even in mitts when you’re in a hurry. As you’d expect the women’s version is specifically tailored for the female figure. Both version are cut high at the back to preserve your modesty in the drops and both are available in a choice of cobalt blue, navy blue, or sand colours.

These are made from a 65%/25% polyester/cotton mix poplin lightweight fabric. They are probably not going to resist that sudden summer downpour but should the unthinkable happen they should in theory dry out pretty quickly too. 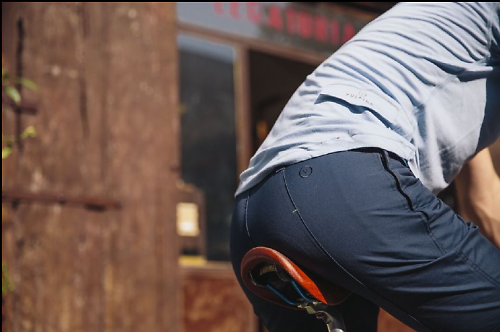 Suggested temperature range is 14°C to 30°C+ and both men’s and women’s versions are available in sizes fro XS through to XL. 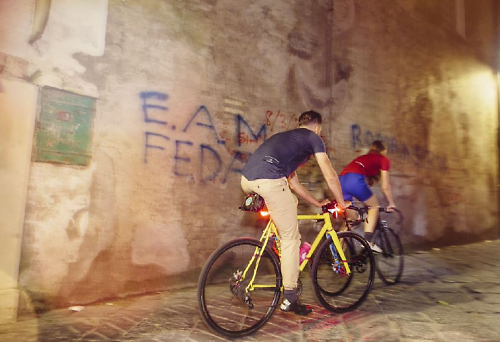 Not everyone wants to get their knees out on a summer day - and let’s face it, not every day or every summer situation is suitable for bare legs. Vulpine have that covered too (sorry) with their summer trousers. Same fabric, gusset, and cut as the summer shorts with the addition of articulated knees for pedalling comfort and a drive side button tab to cinch them in so you do get any oily chain marks on them.

Strictly speaking these aren’t a new garment but are an updating of Vulpine’s original Tailored Trousers, but they look to be such a radical re-working to count as ‘new’ in our book. 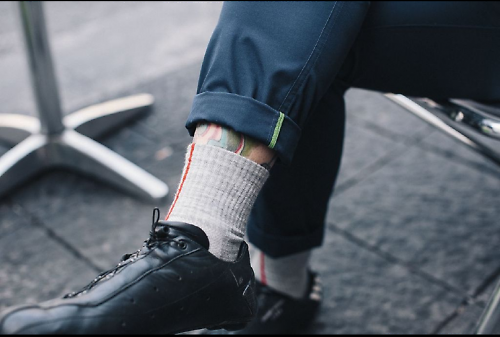 As with the Summer Shorts Vulpine see these as ideal for urban riding, touring, commuting, and casual riding. Suggested temperature range is 10°C to 30°C and above. 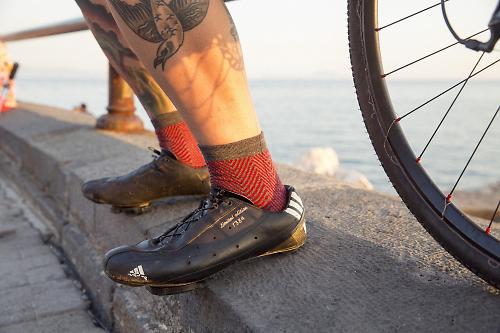 Did I say there was no Merino in the summer range? I meant less. Cos if there’s one place Merino really works in the summer it’s on your feet being both comfortable and pleasingly niff neutralising - (does make you wonder how bad sheep would smell if they weren’t covered in wool, but that’s a discussion for another day).

Anyway, Vulpine have added two new socks to their range for summer - the City Sock for gadding about it, and the Race Sock for gadding about fast in. Both are made from a 70% Merino Wool mix. According to Vulpine the City Sock is all about bringing tailored British style to the ankle sock - by means of herringbone. They certainly look good and they’re available in a choice of red, charcoal, or fuchsia (so there is some pink in the range) designs. The Race Sock has a more technical construction than the City Sock with reinforced panels at heel and toe for extra strength and thinner panels for enhanced breathability on the top of the sock.

Styling is restrained, you could get away wearing these anywhere - Vulpine reckon you can flash them in the boardroom or a New York deli with impunity (we’re strangers to such places and to the whole area of sock ‘flashing’ so we’ll have to take their word for it)  - a discrete go-faster stripe in a choice of light blue, green, or fuchsia pink let’s those in the know know what your socks are all about. 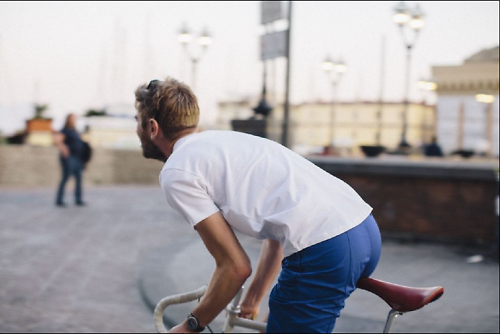 It may be new but Vulpine are already billing this as a ‘rock-solid classic’ so they must be confident they are on to a winner. On the face of it this looks to be very much along the lines of their Merino T-shirt but not in Merino wool and a third less. Instead of Merino the Classic Dri-Release is made of… well, you don’t need me to tell you do you? Oh all right then, it’s made from Dri-Release. a blend of 81 per cent polyester, 14 per cent cotton, and 5 per cent elastane with a built in odour resisting treatment. As with the Merino T-shirt Vulpine promise a cycle friendly cut that works well off the bike, meticulous attention to detail, and an absence of scratch labels. This is definitely a piece we’ll want to test. While there is not doubting that Vulpine’s Merino T-Shirt is a superb piece of kit, it also true that it is at the upper end of the price scale for such garments. The Classic Dri-Relese T-shirt does look competitively priced but you don’t have to pay very much more to get a 100 per cent merino T.

Finally Vulpine have subtly tweaked an old favourite of ours, and another summer item - the Merino Button Jersey - with the aim of making it even more comfortable. Quite a tall order as the original was a supremely comfortable bit of all day riding kit.

They haven’t messed with the wool mix though, it’s still 100% pure Merino wool for super softness and maximum odour killing powers. Pure Merino jersey’s might be a bit stretchy in the picket department but lightweight ones like this are amazingly useful bits of kit for summer riding - particularly commuting in that you can wear them time after time - something you just can’t do with polyester tops… well, unless you want to be able to clear a room just by walking in.

Vulpine in Napoli, Summer 2014 from Vulpine on Vimeo.

If you want to delve  deeper in to  Vulpine’s latest range it's all available now on their website www.vulpine.cc and  they have made their lookbook available online (complete with free wallpapers).  And to see what sunshine looks like check out this rather lovely video Vulpine shot in Naples recently to showcase the new range.

Vulpine will be launching their winter range in September with the promise of lots more new garments including, so they tell us, riding jeans. First though, let’s get summer out of the way…

1
Police officer caught on camera telling cyclists to ride in single file to be given "education around traffic offences"
2
Footage of cyclist's encounter with mountain goat "on steroids" goes viral
3
Driver "used bus as a weapon" against cyclist, loses appeal over sacking
4
‘Dangerous cycling is not a priority,’ police force says
5
Cyclist bitten by dog… and then abused by owner
6
Why was Mark Cavendish riding with Lance Armstrong this week?
7
Five-year-old boy killed after van driver knocks him off bike
8
Want the “fastest socks on the planet”? They’re yours for €1,000 + more tech news from Campagnolo, Rapha, Van Nicholas...