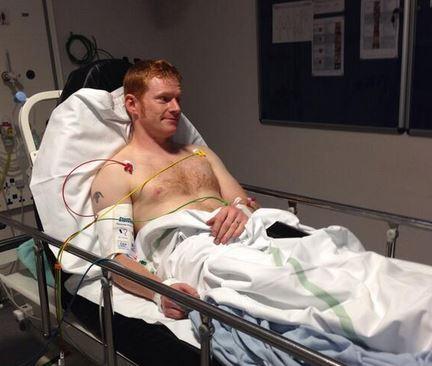 Pedals for Medals ride for Help for Heroes curtailed - but injured rider tells road.cc it could have been much worse
by Simon_MacMichael

A non-stop ride from Manchester to Gibraltar being undertaken by four cyclists to raise funds for the charity Help for Heroes has been abandoned after two of the riders were hospitalised after being hit by a van travelling at an estimated 60 miles an hour in Kent early on Friday morning.

The quartet were undertaking the 1,583-mile ride as a relay, with pairs of riders riding for four hours at a time. They had left the Imperial War Museum, Manchester, at 11am on Thursday morning and aimed to reach Gibraltar early one Tuesday morning.

Former Royal Marine Matt Lavery and ex-Royal Engineer Dave Dickinson had been riding for around an hour following the last changeover when they were hit by the van shortly after leaving Maisdstone, heading towards Dover on the A249.

Matt, who suffered several cracked ribs and a punctured lung and is currently recovering at Tunbridge Wells Hospital, Pembury, told road.cc that with daylight starting to appear, and Dave riding a few yards ahead of him, the pair were hit from behind by a van.

It wasn’t a direct hit from behind, more a glancing blow from the passenger side, something that Matt believes meant the consequences of the collision were much less serious for the pair than they might otherwise have been.

Both riders were catapulted beyond the grass verge and into the bushes, rather than hitting the road surface. Matt told us that the driver did not stop immediately, but returned to the scene shortly afterwards to discover that he had hit the two cyclists. Police attended the incident, and we will be following up with them on what action is being taken.

Outwardly at least, Dave’s injuries looked more severe – Matt said that he suffered cuts, bruises, scrapes and had some skin missing, and that his helmet had been smashed. Initially, it was feared that he had a broken jaw, but that turned out not to be the case and following a CT scan he has been allowed to return home to continue his recovery.

Matt said: “Initially as soon as I got hit, I was trying to work out what happened, Dave was screaming, I was screaming, you think the worst, so that was scary.”

The ride has been abandoned, although initially there was a split between the crew involved about whether the two other riders – Jo Cadwallider and Gaz Davies – should attempt to carry on.

“We had two riders that were still up for it, but the wind had been taken out of the sails,” explained Matt.

“We’d just got up to the speed with the changeover routines, we had the momentum, everyone was feeling good.

“There was a bit of debate once they knew we were in hospital with non-life threatening injuries, but with two riders the dynamics change, there are other risks involved.

“So we’ll regroup and have a look at having another crack,” he added.

You can find out more about the Pedals for Medals ride on its website here, which includes a link to make donations as well as links to the team’s Facebook page and Twitter feed.

Matt acknowledged that the outcome of the collision for himself and Dave could have been much worse, and several stories here on road.cc in recent months have highlighted the dangers that those cycling for charity can face.

In March, also in Kent, Christian Smith was killed while undertaking a 24-hour ride in which he aimed to raise £1,000 for the charity MIND. Donations from well-wishers since his death now exceed £80,000, and his widow aims to finish the ride.

It’s not just cyclists who can face hazards from traffic while trying to raise money for good causes.

On Friday, a man attempting to break the record for running from Land’s End to John O’Groats was forced to abandon his attempt after he fell into a ditch when a lorry passed too close to the cyclist accompanying him, sending the rider crashing into the runner.

According to the Barnsley Chronicle, Gavin Felton, who was also aiming to raise money for Barnsley Hospice, tore calf muscles and damaged nerves in his left leg.

The 44-year-old from Barnsley said: "I was running with a cyclist from my support team, who was at the side of me nearest to the road, and we were both lit up like Christmas trees.

"A lorry passed and came within about a foot or so of the cyclist and as it passed it blew him in to the side of me.

"I had to swerve and ended up in a steep ditch. The lorry never stopped."

He now plans to attempt to break the record in August 2015.