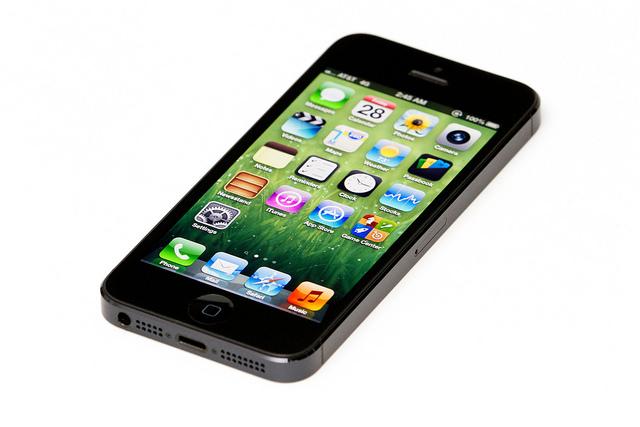 Apple patents technology to stop texting while driving - but 6 years on, it's still not live

Apple has developed technology that would make it impossible to text and perform other distracting tasks on a smartphone while driving – but six years after filing a patent, the function has yet to be incorporated into its iPhone. The news comes as Nottinghamshire Police reveal that in the first fortnight of this month, officers stopped more than 1,000 motorists for illegally using a phone at the wheel or not wearing a seatbelt.

Apple's patent, for a "driver handheld computing device lock-out" system, which would block text messaging and other functions once it detected that a smartphone was using the device while the vehicle is in motion, was filed in 2008 but only came to light this week, reports Apple Insider.

It would work in one of two ways. The first, using features of the phone, including its accelerometer, camera, light sensors and GPS data, to analyse motion and scenery and, if it determined the user was driving, certain functions would be disabled.

It would be able to distinguish between whether a person was operating a moving vehicle, or walking, runnning, or using some other form of transportation other than a motor vehicle.

The second would see the car itself communicate with the phone through radio signals or RFID technology, blocking use from the driver’s seat once in motion.

According to Apple Insider, both systems would be able to distinguish between a device being used from the driver's seat, and one being used by a passenger.

Apple’s filing acknowledges that “As noted in the patent document, however, such a mechanism would be "a significant selling point in the eyes of concerned parents, and it could lead to legislation that would require all handheld computing devices to disable texting while driving."

The patent was filed the year after the Apple iPhone was launched, but the California-based company has not yet incorporated the technology into its iOS mobile operating system.

Instead, it has been developing its CarPlay system, which aims to make an iPhone the car’s entertainment and navigational hub.

Now that its ability to block certain features of the phone is public knowledge, however, Apple will come under pressure to introduce it from road safety organisations.

Paul Watters, head of motoring policy at the AA, told the Guardian: “As a market leader, Apple could have the power to change the culture behind texting and driving, if it works and is intuitive; that would be a very good step.

“What we find in our research is that there’s an addiction here, to texting and using smartphones, it’s an addiction that is very hard to break even when in the car — it will take some system to help people break that addiction.”

However, he cautioned: “Even if you cut off some functionality, it doesn’t necessarily remove the distraction the phone causes for drivers. There is no greater safety system than simply turning off the phone while driving.”

In 2012, research commissioned by IAM from the Transport Research Laboratory showed that texting at the wheel slowed driver reaction time by 38 per cent. The road safety charity said that using a smartphone at the wheel was more dangerous than driving while drunk or smoking cannabis.

Yet surveys regularly show a high proportion of motorists admitting to using their phones illegally while driving, which now carries a fine of £100 and three penalty points.

In one poll, from road safety charity Brake and the insurer Direct Line, three in ten drivers confessed to reading or sending text messages while driving, rising to four in ten 18-24-year-olds.

Meanwhile, Nottinghamshire Police launched a road safety campaign on 1 April that in its first two weeks resulted in more than 1,000 motorists being stopped for illegal phone use or not wearing a seatbelt.

No breakdown is available, but over the two months the campaign is due to run, police expect more drivers than the 5,000 caught last year to be stopped. Those found using phones are given the option of a fine and penalty points, or to attend a driver awareness course.

Chief Inspector Andy Charlton said: “Sadly this isn’t a surprise – despite similar campaigns in 2012 and 2013 - it shows a significant number of people still regard their addiction to their phone as more important than the safety of others and themselves.

He added: “It’s not too late to change your habits. Don’t get distracted by your phone and always wear your seatbelt.”