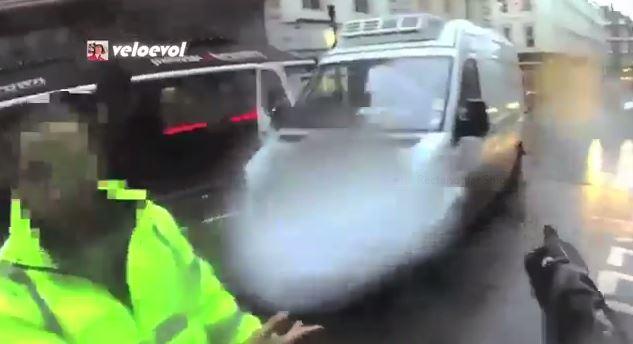 A white van driver in London had what a cyclist who posted helmet camera footage of a road rage incident to YouTube described as “a bad day” after losing his job and being convicted of assault following.

The video of the incident, which took place in Bedford Street, Covent Garden, was posted to YouTube and Reddit, as well as to the road.cc forum, by Evo Lucas.

The driver beeps his horn as he attempts to overtake the rider, then stops his van and gets out, accusing the cyclist of hitting his van and and appearing to headbutt him. Several passers-by come over to try and calm the driver down.

At the end of the video, he reports the outcome of the episode: “Incident reported to Metropolitan Police and to his employer. The video is also sent to his employer who immediately terminate his employment.

“He is eventually charged with assault. At court he initially pleads not guilty. On learning about the ‘cctv’ evidence he changes his plea to guilty.

“I also received a profuse apology in court post verdict,” he added.

We contacted Evo Lucas for some background to the video, which was filmed late last year with the case going to court recently.

He told road.cc: "I can't say the driver's attitude surprised me much but his actions did. The fact he was endangering me by trying to squeeze past on a narrow street, with parked cars and oncoming traffic really angered me. Turns out he was bottling enough anger for the both of us.

"The fact he directed his vehicle at me was what made me take it further with the police and directly to his employer.

"I looked up the company's details and found the MD was a keen trail rider, after making contact I sent him and his management team the video, whilst informing the MD the police will be involved.

"The MD gave the driver a chance to explain but he made up a load of rubbish (he wasn't aware of the camera) which resulted in him being unemployed within 24 hours of the incident.

"I asked the MD what course of action would he consider 'best to be avoided' and he said a viral video with his company name all over it. I assured him that could be avoided."

That swift action by the company in terminating the driver's employment is the reason its name on the vehicle has been obscured in the video.

Turning to the court case, he said: "At court his lawyer was not aware of the CCTV and changed his plea. I received two apologies post verdict, one in the court and one outside.

"He had no need to apologise me except to make amends. Since court I carry no ill feeling towards the driver but it has hardened my camera stance as without it he would no doubt still feel he could act in this way with impunity," he added.