Garmin-Sharp rider's eighth pair of custom-designed Fiziks is now up for auction. Here are all of them so far...
by Mat Brett

After last weekend’s Paris-Roubaix, David Millar has now had ridden in eight pairs of custom Fizik shoes this season, all of which are being auctioned for the Small Steps Project charity.

Millar will wear a different pair of shoes in every race in his final season as a professional bike racer.

The latest shoes to be added to the ‘An Eloquence of Movement’ series are from Paris-Roubaix. Despite being in his 18th season as a pro, it was only the third time that Millar had competed in the race.

“The design itself is based on the finish, the velodrome and the famous showers,” said Millar ahead of the race. “This way whenever I look down I’ll be reminded that I have to get there. No giving up this year, I was telling Sebastian Langeveld yesterday that I find it easier to finish a Grand Tour than I do Paris Roubaix (starting it has actually been my biggest problem). So these shoes are about me finishing, making it through hell, for once and for all.”

Millar did finish Paris-Roubaix, the only time in his career, 16:40mins down on winner Niki Terpstra. The bid on the shoes at the time of writing is £1,020 with the auction open for another 10 days.

You'll see the words “Paris-Roubaix est un connerie” on the side of the heel. There are a few ways to translate that but essentially it means “Paris-Roubaix is a bloody stupid thing to do.”

Here are the other shoes that Millar has raced in so far. Which are your favourites? 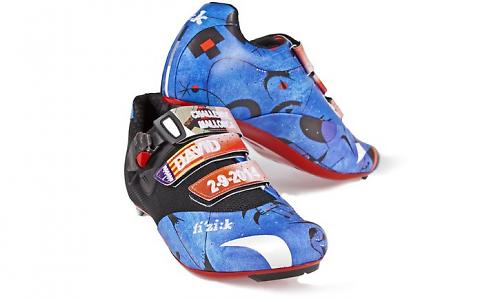 For more info on the project go to www.fizik.it/an_eloquence_of_movement/