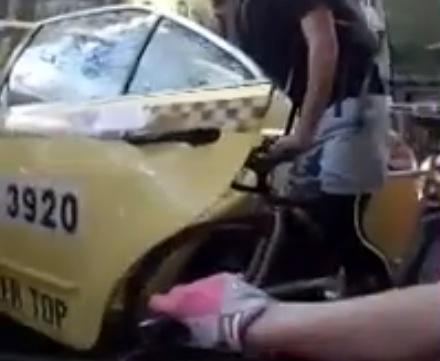 A video of a cyclist being “doored” by a passenger exiting a taxi in Melbourne has prompted a big row over cycle safety Down Under – with an editorial in The Australian lashing out at “the menace of urban cyclists,” and BMW Australia seeking to disassociate itself from comments made on Facebook by one of its contractors.

The video was shot by a female cyclist who was riding down the gap between traffic and the kerb in Collins Street in central Melbourne – described in local reports as a “cycling refuge” rather than “a designated bike lane.”

As she does so, the rear passenger door of a taxi is opened into her path, with no time for her to avoid the collision.

The 28-year-old, who did not want to give her name, told NineMSN: "I take the risk and I know when I'm riding down there, I go very slowly.

"When I first started riding I was terrified of that lane, but it is the only practical and efficient way to get from work to home."

Following the incident, she followed the man who had opened the door, who called her “a fool” for riding up the inside of the vehicle. Repeatedly asked for his details, he gave the name “John Smith.” The younger of his two companions - all three males in suits - told her to “f*ck off.”

The original passenger, later identified as 65-year-old John Hunter, at one point turns and says, “the way people like you ride around is disgusting.”

According to NineMSN, he later turned himself into police, but was not charged.

An article on car door crashes on the website of Australian cycling advocacy group Bicycle Network says: “Rule 269(3) of the Victorian Road Safety Road Rules 2009 states it is an offence to cause a hazard to a person or a vehicle by opening a car door, leaving a door of a vehicle open, or getting off, or out of, a vehicle.”

Bicycle Network also provides advice to cyclists to help avoid such collisions, saying, “the tips for avoiding this type of crash are the same for avoiding crashes in general – ride sensibly and conservatively to avoid dangerous or risky situations in the first place.”

BMW Australia then found itself under attack from cyclists after Facebook user Tony Chirinian, whose profile said he was business development manager at the German car maker, posted a message saying: “I vote for starting a new social media craze. DOORING … Start dooring cyclists & upload videos to social media.”

He has since deleted his account, but not before cyclists brought the post to the attention of BMW Australia, whose spokeswoman, Lenore Fletcher, told the Herald Sun it did not “in any way” support or condone the post.

“This individual is an external contractor to BMW Group Australia,” she added.

“Vehicle, passenger and commuter safety is an integral part of BMW’s Corporate philosophy and is a matter which we take very seriously. This issue has been handled internally.”

The Herald Sun’s article highlights how the dooring incident has brought to a head tensions between certain cyclists and some motorists, with several of the latter quoted saying that cyclists should be licensed and pay insurance, and their bikes should be registered.

While feelings clearly run high on both sides, Melbourne, along with Adelaide, are widely viewed as Australia's most bike-friendly major cities, well ahead of Sydney and, in particular, Brisbane.

Newspaper hits out at "menace of urban cyclists"

On Friday, meanwhile, national newspaper The Australian published an editorial that hit out against “the menace of urban cyclists.” It said:

The arrogant sense of entitlement in our inner cities is also evident in the ever-growing number of cyclists snaking their way through pedestrians on overcrowded pathways, darting between cars and clogging-up lanes on our congested roadways.

The problem of city cyclists reached their apogee in Melbourne this week when a cyclist was “doored” on busy Collins Street, after a passenger opened a taxi door and a rider crashed into it. Neither the taxi nor its passenger could be deemed at fault because a narrow “bike lane” inhibited the taxi from stopping next to the kerb. The passenger was lucky to avoid serious injury.

What makes this incident even more absurd is that, although the lane was marked by a bicycle symbol, it was not actually a dedicated bicycle lane. Melbourne bike lanes must have signage, fixed to a pole, that shows the start and finish of a lane, as well as clear markings on the road itself. The state’s bicycle operations officer — yes, there is such a position — admits there is confusion for cyclists, pedestrians and motorists. Cyclists, including the one “doored” this week, are using cameras to film such incidents so they can make insurance claims. The Victorian government imposed even tougher on-the-spot fines in 2012 for people who opened car doors in the direct path of cyclists.

For too long, authorities have bowed to the demands of selfish cyclists and their lobby groups. Truth is, our cities are dominated by cars because they are sprawling. We have no equivalent of Amsterdam and should stop pretending we do.

The row comes against a background of a strong increase in the number of cyclists killed in Australia last year.

In mid-November, with seven weeks of the year remaining, News.com.au reported that cyclist fatalities were already 42 per cent higher than in 2012 and were running a third above the average of the past decade.