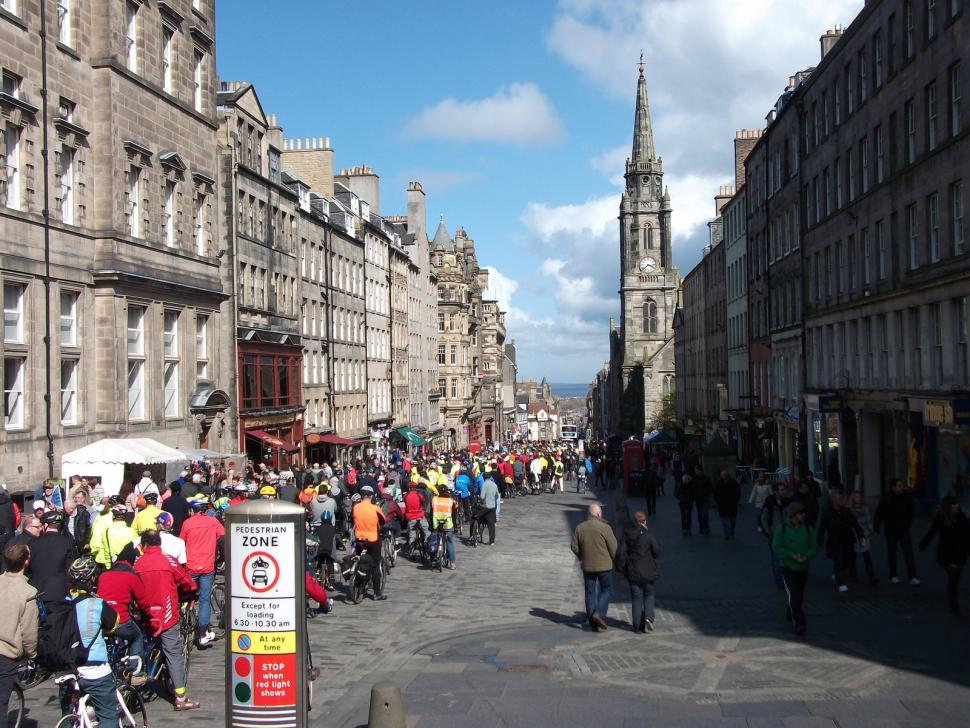 Thousands of cyclists expected to call for safer roads, more investment and improved facilities for those on bikes
by Simon_MacMichael

There may be no Sky Ride in Edinburgh this year, but Saturday 26 April will see the third annual Pedal on Parliament ride. Last year's edition brought 4,000 cyclists including former world champion Graeme Obree onto the streets of the Scottish capital to campaign for safer roads and more investment in cycling infrastructure to turn Scotland into a cycling nation.

As in previous years, cyclists of all ages and abilities are invited to meet at the Meadows at noon, where a one-minute silence will be held to commemorate people killed on Scotland’s roads including the 12 cyclists who died last year and the two who have lost their lives so far in 2014.

The ride will then set off via the Royal Mile to the Scottish Parliament to call on politicians to back Pedal on Parliament’s manifesto, which calls for:

Cycling to be designed into Scotland’s roads

Cycling to be integrated into local transport strategies

The risk of HGVs to cyclists and pedestrians to be reduced

A strategic and joined-up programme of road user training and

The Scottish Government has an ambitious target of 10 per cent of journeys in the country to be made by bicycle by 2020, but Pedal on Parliament says it is “far behind” in achieving that goal, with census figures showing that the percentage of people commuting by bike grew only 0.1 of a percentage point in the decade to 2011, standing at just 1.6 per cent in that year.

The ride’s organiser, David Brennan, said: "This year Scotland will be hosting the Commonwealth Games, bringing some of the world's top cyclists to race around the streets of Glasgow.

“Yet if those same riders were to venture out in Glasgow on the roads that I and others cycle on any other day of the year, they would be shocked at how little quality provision there is for people who chose to travel by bike.

“As a result I often feel that my safety is compromised and many potential cyclists are discouraged from starting at all. We may have produced some great sporting cyclists as a nation but we're a very long way from being a cycle-friendly country.

“We want to see a Scotland where anyone - from Sir Chris Hoy to my four-year-old daughter - can enjoy the freedom of getting about by bike if they wish, and not having to wait until the roads are closed to do so."

Graeme Obree added: "Pedal on Parliament are not asking for spending here, but an investment, so that young people can cycle freely and without fear.

“We want a network from our homes to our workplaces, our shops, and schools and everywhere we want to go.

“It’s an investment in the health of the nation."

You can find more information on this year’s ride on the Pedal on Parliament website.