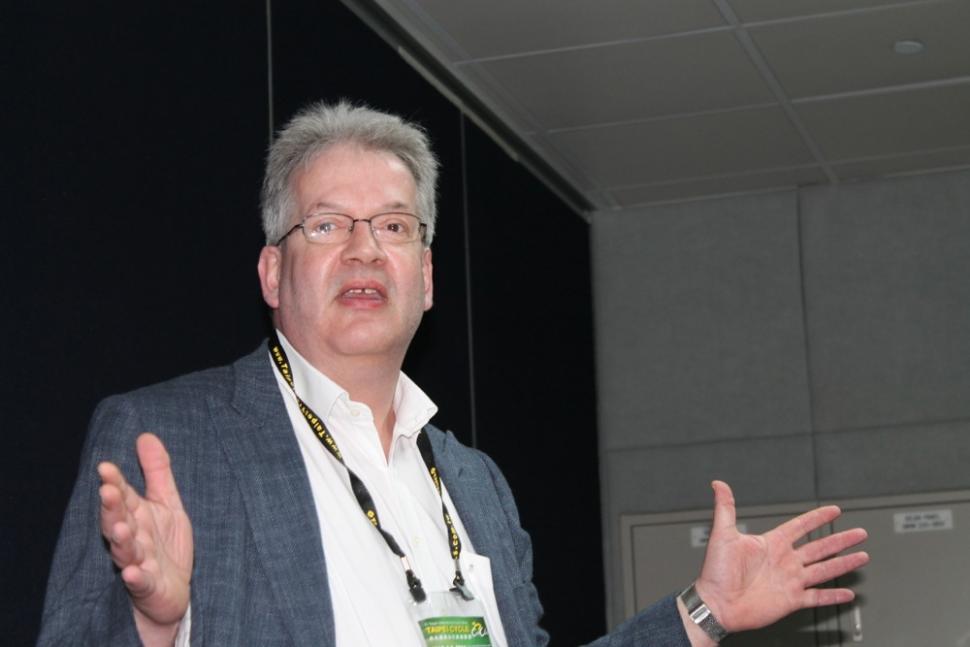 The World Federation of the Sporting Goods Industry (WFSGI) has today reported that it is looking forward to a new era of co-operation with the UCI following the appointment of Dimitris Katsanis, one of the key members of British Cycling’s ‘Secret Squirrel Club’, as a consultant to the sport governing body’s Equipment Commission.

A meeting between between Katsanis and the WFSGI at Taipei Cycle this week was extremely positive, the WFSGI subsequently saying that it appreciates the openness of Katsanis in their initial dealings and that the WFSGI Bicycle Committee is willing to provide him with their support.

“We considered the UCI as a castle with closed doors,” said Jeroen Snijders Blok (pictured), a member of the WFSGI Board of Executives. “We’ve knocked many times on that door but it was never opened. Now they have opened it from the inside: welcome!”

“Maybe we can call it a new era in collaboration,” added Yves Mori, the WFSGI’s Communication and Bicycle Manager. “All the signs we got in the meeting were very positive.

“We have a great hope now to continue working with [Katsanis], to support him, and that there will be a collaboration between the two sides in the future about existing rules and also about new rules.”

All good, then. What rules are we talking about?

“The main issue we have is with the two UCI rule documents,” said Yves Mori. “We asked Dimitris for clarification that we can create one document out of these two but because it was the first meeting he was unable to give concrete feedback on this issue now, but he showed a very well appreciated openness on this topic and other topics.”

The WFSGI are also keen to discuss the UCI’s new wheel approval process in order to get a solution that’s acceptable to both the UCI and to wheel manufacturers. The UCI has previously announced that it would begin certifying wheels for racing in a similar way to its frame approvals process, but that it would not accept external help in designing those tests.

Now, the implementation of five new wheel tests will be reconsidered by the UCI while the WFSGI Wheel Committee will support the UCI in getting adequate tests by providing data and test proposals.

Thirdly, the WFSGI want to get a resolution on the use of disc brakes in road racing. Currently, discs aren’t permitted but there’s huge pressure from the bike industry to change this with the WFSGI having submitted a formal request asking for approval.

“Dimitris also showed an openness towards this topic,” said Yves Mori. “Of course, he couldn’t allow it from now on just because the industry wants to have it but he said it can be a topic in the future. There is already a specific disc brake group inside the Technical Committee of the WFSGI and Dimitris has mentioned that he is willing to work together with this specific disc brake group to speak about the possible introduction of disc brakes in road racing.”

Taipei Cycle Show Daily reported that Dimitris Katsanis said, “This is the first time I’ve been as part of the UCI to speak to the industry and it looks like the industry have a good reaction to that.

“All these years I was on the other side banging on the UCI’s door; now I have the chance to actually try and do things better.”