The Tour Down Under was the first chance for many riders to get acquainted to new bikes and kit, but for Australian Adam Hansen it’s business as normal, as he remains with the Belgium team Lotto-Belisol for another season.

The Belgian team is sponsored by Belgian cycling company Ridley, and they supply the team with a choice of bikes. Sprinters like André Greipel favour the slippery Noah FAST aero road bike while the majority of the team, faithful domestiques like Hansen, opt for the lighter and stiffer Helium SL. 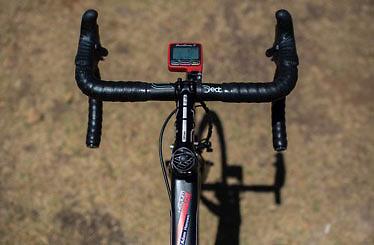 This is the company’s lightest offering, a frame with a claimed weight of just 750g making it one of the lightest  in the professional peloton. That means a light build is possible. Sling some pimp gear at it and you could have yourself a 5.52kg build like this special one-off built for Ridley boss Anthony Kumper.

The Lotto-Belisol team though are limited by the UCI’s 6.8kg minimum weight limit, but even with a Campagnolo Record EPS groupset and Bora Ultra deep-section carbon wheels, the weight must be nudging fairly close to that limit. All the Campagnolo sponsored teams this year, including Lotto-Belisol, are on Record EPS 11-speed groupsets. Some are using the new internal battery now available, such is the case here. As we found out when we had a close look at the battery recently, it’s a bit of a fiddle to fit inside the frame as it has to sit right down in the seat tube (or down tube) and be fitted to the bottle mounts. 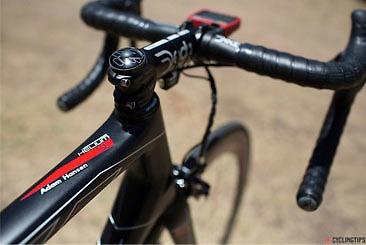 At  6ft 1in Hansen isn’t too short and from the look of that stem he really likes to get his bars as low as possible. Pros spend a huge amount of time in the saddle, over 30,000km a year at least, so they are able to get comfortable in such extreme positions. They also spend a lot of time working on their core strength and flexibility so they’re able to comfortably ride such positions. Needless to say, it's not advisable to copy a position like this on your own bike. 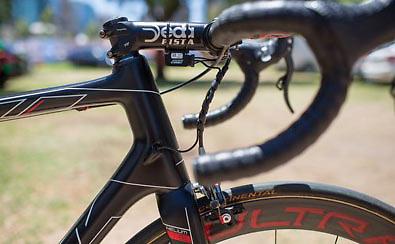 Hansen has opted for an alloy Thomson inline seatpost and Deda Pista track stem over the regular items the team are supplied with. The stem is presumably for the increased stiffness it offers, and the inline seatpost is so he can shove his saddle right forward on the rails.  You might not find many high street bike fitters nodding in agreement with this setup, it's a bit unusual. We can only imagine Hansen likes to get right forward on the bike and well over the bars, into the drops, when he's riding.

A slammed negative rise stem isn’t unusual then, but a 38cm wide handlebar for a guy of his dimensions is. He certainly caused plenty of raised eyebrows when he first turned up to a race with such narrow bars a couple of years ago. Some people do favour wider or narrower bars though, and there is an argument to be made for improved aerodynamics and also for moving through a tightly bunched peloton - narrower bars give you a little more wiggle room. Whatever his reason for speccing such narrow bars, he’s a decision he is sticking with.

The frame has only been in Ridley's range for a couple of years, and is state of the art. It incorporates many ‘standard’ features seen on such top-end equipment. So, up front is a meaty tapered head tube, down below is a huge bottom bracket shell housing a BB30 standard, rounded square down tube and box section chainstays. And pencil thin seat stays. There’s clear similarities with other frames here. Cervelo’s R3/R5 leaps to mind.

Ridley use a blend of 60, 40 and 30 ton high modulus carbon fibre to allow the engineers to design in the required stiffness and compliance. Much of the team at this training camp were riding this bike. It’s an excellent all-rounder, and will excel in the mountains as much as it will in the early season classics. You can read what road.cc thought of the Helium SL when we took it for a spin.

1
Win! Hammerhead Karoo 2 cycling computer plus custom colour kit, HRM and bottle worth over £450!
2
Cyclist fined £75 for riding outside London tube station – but park your bike there and it could set you back £50,000
3
A lot of motorists really aren’t happy about impending changes to The Highway Code
4
Highway Code changes aimed at protecting cyclists to become law next month
5
£440 fine for 92-year-old who crashed into cyclist on Cambridge roundabout
6
Near Miss of the Day 673: “Way too close to ignore” – impatient driver brushes past cyclist
7
Richard Dawkins claims “psycho” cyclist smashed up his Tesla – while he was in it
8
Twin brothers in court charged with murder of charity cyclist in Scotland