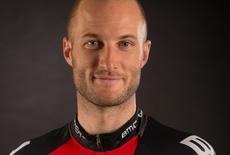 Steve Cummings of BMC Racing has today won the French early season race the Tour Méditerranéen, the Briton continuing his impressive form this month where he also finished second overall at the inaugural edition of the Dubai Tour.

Victory in yesterday afternoon's individual time trial put the 32-year-old from the Wirral into the overnight lead ahead of today's fifth and final stage which finished at Mont Faron above Toulon.

Cummings crossed the line fourth todayt, 11 seconds behind AG2R's Jean-Christophe Peraud, to clinch the overall by 4 seconds from the Frenchman.

"It was so close, I went way over my limit," said Cummings afterwards.

"I just did my best and luckily it was good enough. I thought I could do a good GC, but was looking more to the time trial and taking things day-by-day.

"But I kept staying in the front and then the time trial was great. So today was like the icing on the cake.

"It was great for everything to fall into place.

"In the past, I have had form like this – or better – and something has gone wrong: I have had a crash or been sick. It has never come out properly. So it is nice to have it work out."

Cummings' victory in a race that hads previously been won by riders including Eddy Merckx and Paolo Bettini comes two years after the triumph of Jon Tiernan-Locke, then with Endura Racing.

Joining Team Sky for its debut season in 2010, Cummings finished second overall to Rabobank's Lars Boom the following year and joined BMC Racing for the 2012 season.

He broke his pelvis in February that year during the Tour of the Algarve, but later that season gained his first Grand Tour stage win in the Vuelta.