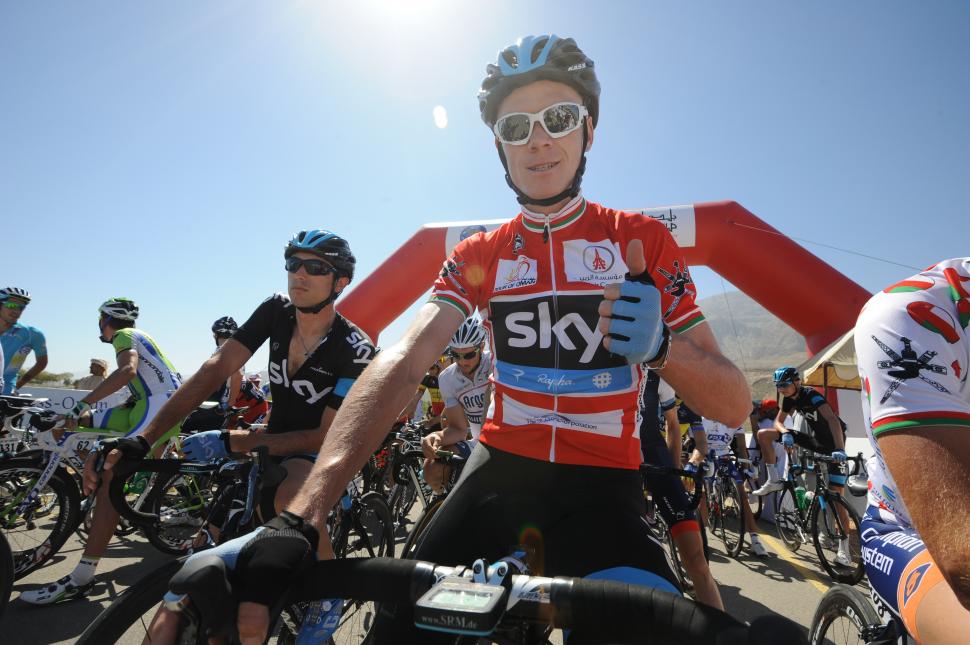 Chris Froome says he is feeling under less pressure than he was 12 months ago as he prepares to get his season under way at the Tour of Oman, which starts on Tursday – but believes that only by repeating his achievements of 2013 can he remove any doubt that they were achieved cleanly.

It won’t escape some that only a little more than 12 months ago, Lance Armstrong confessed to having cheated his way to the seven Tour de France titles he had been stripped of in October 2012.

Armstrong's long-term dominance of the race and the scale of the fallout from the US Postal scandal meant that whoever won the Tour last year would have their performances questioned - and in Sky's case, similarities were darwn between the way they forced the pace on mountain stages and the way the American team did so a decade earlier.

But Froome, who last year succeeded team mate Sir Bradley Wiggins as champion of the sport’s biggest race says it’s only through repeating his victories of last year over time that he can prove he is clean, and that questions will remain if 2013 proves to be a one-off season for him.

Speaking to Teamsky.com, he said: “I want to back up everything I achieved last season and prove to people that I am a legitimate champion.

“Especially in this era of cycling, there’s so much doubt around what we’re doing and I sincerely want to prove to people they can believe in this sport again, believe in me, and believe in Team Sky.

“I hope last year’s not going to be a one-off for me because that would raise doubts.

“I want to back up my results for the next five years at least to prove that nothing was a fluke.

“My results will stand the test of time and I want to erase any doubt about them – that’s a massive motivation.”

Froome dominated all but one of the stage races he took part in last year – only Tirreno-Adriatico, where he finished runner-up to Astana’s Vincenzo Nibali eluded him.

But 12 months ago, as he lined up for the Tour of Oman last year, he had never even won a stage race.

What’s more, it was far from clear whether Wiggins would follow team orders and support him in the Tour de France.

A year on, the situation has changed on both fronts.

Currently, Froome is champion of both of those races, as well as the Critérium International, the Tour de Romandie and the Critérium du Dauphiné.

That dominant season began with his Tour of Oman victory, a race which gave him the first opportunity of the year to reinforce his credentials to win the Tour de France.

“I wouldn’t say I have the same kind of pressure that I had last year for Oman,” he said this week.

“I’m a lot more relaxed coming into this season, but at the same time I feel just as eager and just as motivated to get stuck into the racing. I’m really looking forward to getting back into it.

“Oman is always a place where you don’t quite have the same kind of pressure as in Europe in terms of the press and thousands of spectators.

“But it’s certainly going to be a high level of racing and from the competitors who are lining up there it’s shaping up to be a pretty tough race.

“I’ve felt good in training and I’m certainly hoping to have a good first outing.”

There appears to have been something in a thawing in his relationship with Wiggins over the winter too.

Froome’s apparent attack on his team leader in the 2012 Tour – he would finish second to Wiggins – was widely seen as reflecting a rivalry between the colleagues that had begun during the 2011 Vuelta.

Eventually, Wiggins was left out of the squad after abandoning the Giro d’Italia through illness, and then picking up a knee injury.

Last year’s Tour of Oman was the last time the pair rode together in Sky colours, and there programmes will keep them apart for the coming months,

July, however, could see Wiggins line up in Yorkshire as Froome begins the defence of his Tour de France title.

Wiggins told the Guardian: "I think Chris has earned the right to defend the Tour this year and I'd love to go back and play a part in that and not just sulk off and give up because I'm not the leader."