German manufacturer Focus rejoined the professional peloton at the beginning of the 2013 season, having signed a deal to supply the French squad Ag2r-La Mondiale for three years. Here is a look at their brand new Izalco Max, as ridden at the Tour Down Under by Daniel Maxime, a 22-year-old in his second year with the Ag2R team.

The main change for the team this season is the switch to the brand new Izalco Max, a lighter and stiffer version of the regular Izalco that has long been in the range. While it looks like they haven’t changed much at first glance, compare the two bikes side by side and there’s a whole host of small changes that add up to quote a substantial overhaul. Focus have been busy. 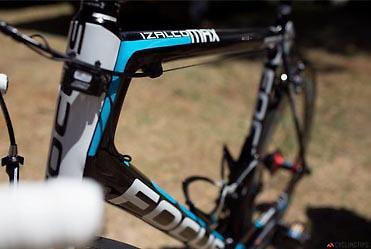 Headline news for the new frame then is the weight. It’s down to a claimed 725g for a size 54, which along with a new 295g fork makes it easily one of the lightest bikes in the peloton. Most frames ridden by the pros sub-kilo, but only a few are sub-800g.

They’ve managed this weight loss with straighter tubes of a smaller diameter, equating to less carbon being used, and therefore less weight. They’ve worked on the carbon layup as well, reducing the number of layers to the minimum required. The carbon extends to the dropouts as well. 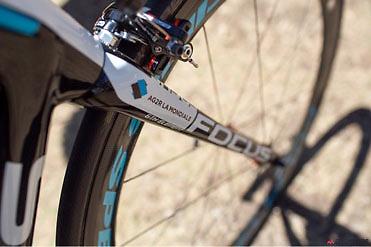 All that weight loss and no decrease in stiffness, according to the claims. They reckon the stiffness is identical to the old frame despite the diet it’s been put on. We’re hearing similar claims from many other manufacturers with their latest frames, it’s simply the result of the advancement of carbon fibre manufacturing and better understanding of working with the material. Top-end road frames are generally getter lighter while maintaining the same stiffness levels of previously heavier versions.

Along with the tapered steerer tube to increase stiffness, they’ve shaped the head tube with what they call the ‘Boost Box’, a specially selected shape said to ramp up front-end stiffness. Both gear cables are routed internally, rather than the novel routing inside the tube walls of the previous frame. Servicing those cables should be a lot easier as well. The rear brake cable meanwhile is routed externally. There’s a press-fit bottom bracket also. 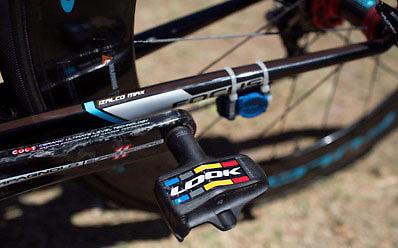 The geometry has been tweaked. They’ve made the head tube taller and the top tube longer. To put that into context, a 56cm size frame has a 16cm head tube, 56.5cm effective top tube and 73.5 degree seat and head angles. Stack is 565mm and reach is 398mm. That’s still pretty racey, and shows just how aggressive the previous model was. That won’t stop some of the Ag2R team fitting zero and negative rise stems we bet.

As last year, the team uses Campagnolo Record EPS groupsets. All the Campagnolo backed teams are on EPS this season. Ag2R also stick with the Italian company for wheels, but the Fulcrum brand instead of Campagnolo. The Fulcrum range are essentially rebadged Campagnolo wheels intended to appeal to people running Shimano and SRAM groupsets. 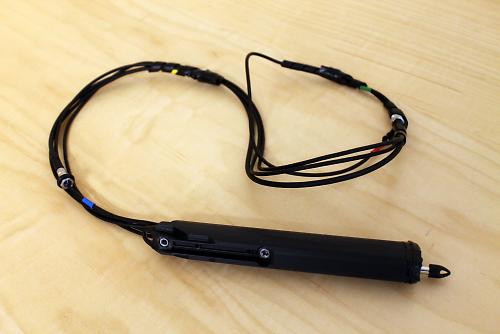 The bulky external EPS battery has gone from the down tube and they team are using the new slimmer and lighter internal battery, pictured above because you can't obviously see it when it's hidden inside the frame. You can read all about the new battery and what it looks like in this first look article.

Fizik has launched a range of bars and stems to complement their saddle range. Ag2R has been involved in developing and testing the new parts, we first saw the pre-production stems and handlebars on their bikes at Paris-Roubaix last year. It looks like the team will be using the company’s cheaper R3 aluminium stems and bars, rather than the carbon bar. 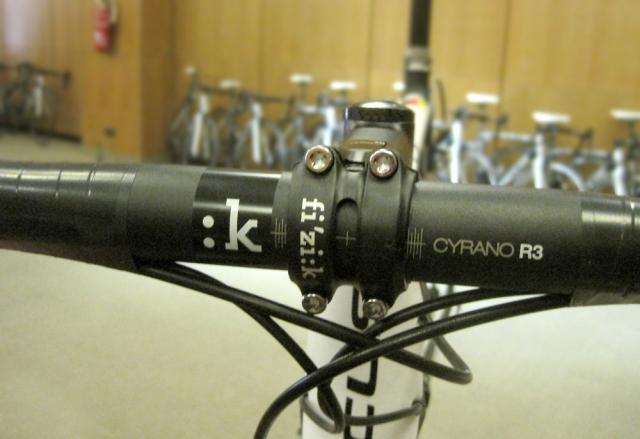 This doesn’t surprise us, a lot of the pro bikes are fitted with aluminium over carbon bars and stems, simply because they don’t need to worry about the weight, and some, like the sprinters, prefer the increased stiffness. They also potentially stand up better in crashes. Fizik also supply the team with bar tape and saddles, this is the Aliante pictured. They wrap the carbon tubular wheels with Schwalbe Ultremo tubular tyres.