We’re with Fizik in Italy this week and we’ve been getting a close look at their new handlebar and stem range. We first brought you details of the company’s expansion into the other contact points back in January, and we can bring you a few more details.

There are two bars, one high modulus carbon and the other aluminium and two stems - both aluminium. Oh we know the name too, Cyrano and bars and stem carry Fizik's R1 or R3 range designation. All the aluminium components were R3. Both bars share what we'd describe as a fairly classic shape

Fizik showed the bars and stems at the end of a product overview for dealers and press from around the world today at their Italian HQ. The bars and stem were presented without comment and the Fizik guys weren't answering any questions, although they pointedly remarked that we could probably deduce all we needed to know from their earlier presentation which majored on their saddle spine fit concept - which basically categorises riders by their levels of flexibility.

So Snakes are the most flexible racy types - guys like Wiggins or Ryder Hesjedal or Thor Hushovd who ride on long narrow Arione saddles. Fizik categorises those riders who are strong but less flexible as Bulls - the Aliante is for these guys, Peter Sagan is among the Fizik supported pros who rides one of these as is Bernard Eisel. Between the Snakes and the Bulls in terms of flexibility are the Chameleons, riders who are flexible but not quite as flexible as Snakes - the Antares saddle is aimed at them, pros like Chris Froome, David Millar and Cadel Evans all ride on Antares saddles.

Team AG2R-La Mondiale have been testing the final prototypes this season. We spotted them at Paris-Roubaix. Fizik have become one of the most popular saddle choices since they launched back in 1996, and so there’s high expectations of their new handlebar and stem range. 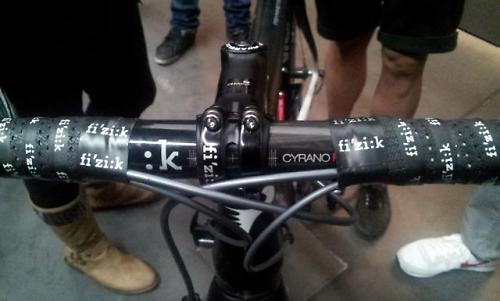 They will offer two handlebars, the R1 and R3, which corresponds with their shoe and Arione saddle range, the lower the number the higher its place in the range. The R3 aluminium stems in particular had a very classy sand-blasted finish that gave a very sculped look, it was only by touching them that you could tell they weren't carbon. 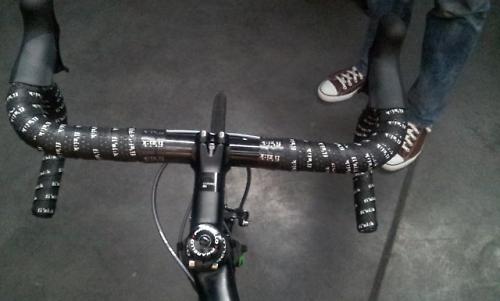 So the R1 is an all-high modulus carbon affair with a deep drop - for the racing snakes. Fizik showed it off on a Pinarello decked out with one of their latest generation Arione saddles - as ridden by Sir Bradley Wiggins. A very broad hint at the type of rider this bar is aimed at. Meanwhile the R3 is a sandblasted aluminium bar with a less aggressive shallow drop and came set up on Focus Izalco with an Antares saddle and a BMC Gran Fondo with and Aliante saddle. 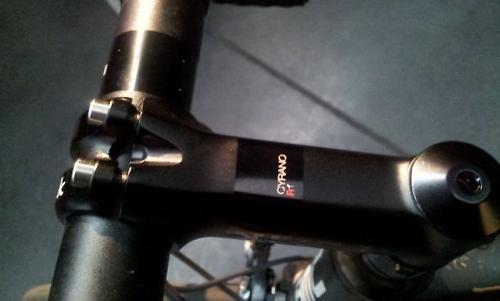 At present there appears to be just the aluminium stem, but Fizik aren't giving too much away ahead of the official launch. We can tell you it'll be available in a wide range of lengths and rises and they showed off two versions here one with a fairly neutral rise and the other that would deliver a much more upright position - no surprise that was paired with the BMC Gran Fondo with the Aliante saddle.

We'd guess that come the offical launch there will be a carbon R1 stem in the line-up too. 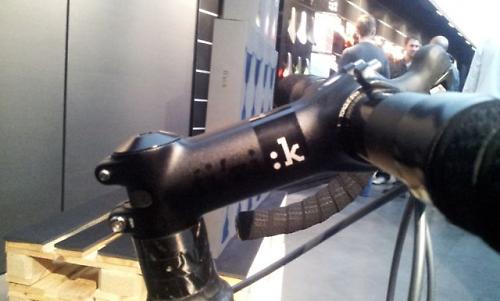 So where will a company that makes shoes and saddles in Italy make its bars? Well the Fizik factory is already full - we went on a very interesting factory tour before seeing the bars - but Fizik has always been about  'made in Italy', certainly that along with their high tech approach and racing success is part of the story with their saddles and shoes. Interestingly though when we pressed a senior Fizik product guy on this he explained that the company didn't make it's products in Italy simply out of a sense of patriotism but because it genuinely beleived that when it came to shoes and saddles the skills available in Italy made it the best place to make those products.

No, Fizik were about making their products in the place that was best at making that type of product - which up until now had been Italy. He left hanging where Fizik considered the best place to make bars and stems hanging. To us the inference of those remarks was not Italy. We're guessing that maybe they will come from a bit further east.

According to the Fizik website the official launch of these new components isn’t scheduled until the beginning of June.