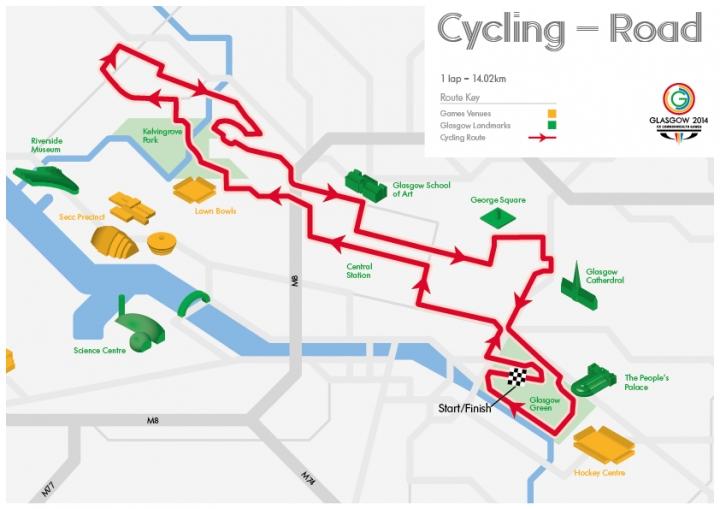 Hopes for an Isle-of-Man gold medal at the 2014 Commonwealth Games road race have taken a boost as organisers have officially revealed that they will be using the 2013 National Road Championships route on which Mark Cavendish won last June.

The Manx Missile beat Team Sky’s Ian Stannard and Garmin Sharp’s David Millar to take the Road Race title last year, and the Omega Pharma Quickstep rider will be hoping for a repeat outcome this summer - although he may not be so worried about the minor placings.

Details of the 168km road race, which will take place on 3 August, were revealed this week alongside the route for the men's 40km and women's 30km time trial due to take place on July 31.

The 14-kilometre road race circuit, which the men will tackle 12 times and the women nine, will once again start and finish on Glasgow Green. The riders will head into the city via Argyle Street, Buchanan Street and St Vincent Street, passing Central Station before riding through Kelvingrove Park out toward the west end of the city.

Doubling-back on itself, almost parallel with the outbound course, the race will head past the Glasgow School of Art and George Square before tackling the tough hill on Montrose street 3km before the Glasgow Green start/finish line.

The time trial on July 31 also starts on Glasgow Green, but rather than a quick lap of the city, the athletes will be slung out of the city’s East End for a solo 30 or 40km ride around the East Dunbartonshire and North Lanarkshire countryside

The 25-time Tour de France stage-winner told the Independent in January how much he appreciates representing his birthplace with the friends and fellow cyclists he grew up with.

"It's on the course where I won the British National Championships in 2013, and the Isle of Man has an incredibly strong team.

"I love doing it because it's with all my mates, the guys I grew up with, we've been bashing around since we were juniors.

"There's me, [Team Sky rider] Pete Kennaugh, Mark Christian who was with Sean Kelly's team and now he's with Raleigh, Andrew Roche who rode the Commie Games in India, Joe Kelly too.

"It's not that often you can get to represent the Isle of Man. I'm British and proud to be, but it's nice because I get to be racing with guys I've raced with my whole life."

This being a road race the event is ticketless and free for the general public. Certain areas may get busy, and viewing may become restricted, so arrive early if you want to see the action up close.

1
Concerns over future of Sheldon Brown’s website as bike shop where he worked closes down
2
WiggleCRC to be taken over by German online giant
3
New aero cycling kit that can only be bought if you prove your average speed is fast enough launches on Kickstarter
4
“The constant low-level bullying is starting to take its toll” – road.cc readers open up on the stress of riding on Britain’s roads, with one giving it up for good
5
Rapha launches lightweight titanium accessories for bikepacking with Snow Peak
6
Pothole reportedly caused crash in which e-bike rider died
7
Kickstarter campaign cancelled for kit available only to those who ride fast enough
8
Supersapiens comment on UCI ban of blood glucose monitoring devices from in-competition use