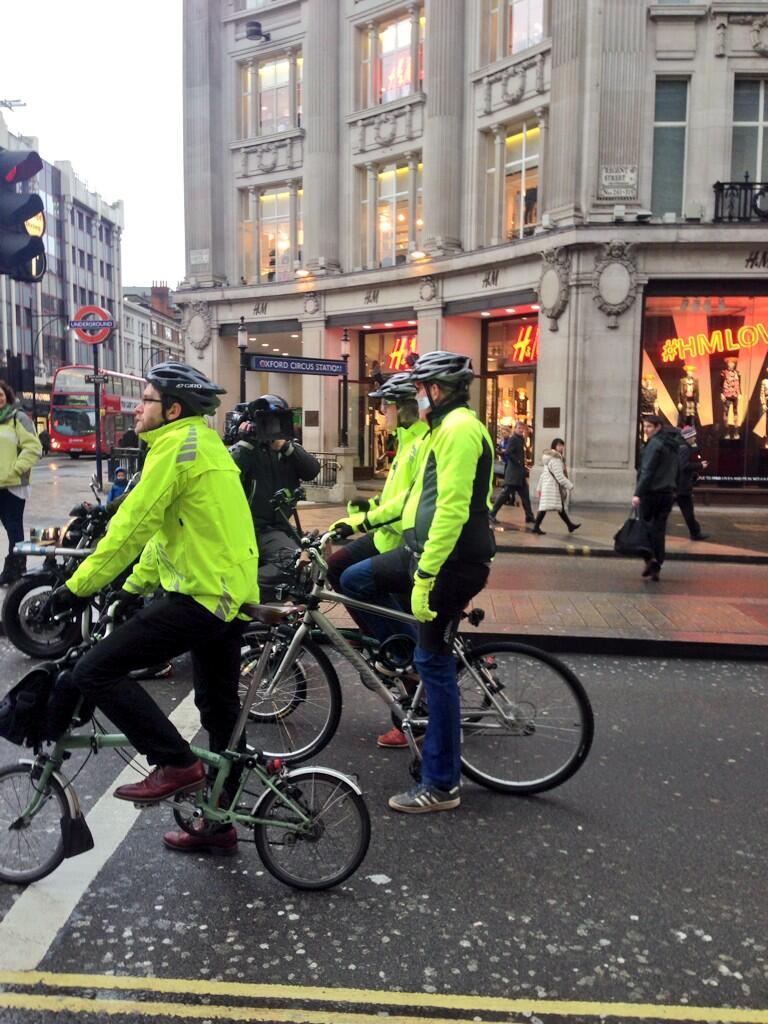 It’s just weeks since that infamous ding-dong with a cyclist he accused on Twitter of ‘point-making’ for taking a safe position in the road, but Jeremy Clarkson’s on a bike on the streets of London, and this time it’s in the name of work.

Spotted around the centre of the capital on an upright hybrid bicycle, accompanied by his co-star James May, who sported a Brompton, the pair appeared to be filming their faces with GoPro cameras attached to the handlebars.

Both had gone to some lengths to equip themselves with safety gear, including matching helmets, hi-viz jackets and gloves, and sunglasses despite the gloomy day.

It seemed Mr Clarkson’s jacket was so new he had in face omitted to remove the tags yet, as pictures published in the Daily Mail show.

The pair were being filmed for the new series of the BBC show Top Gear, followed by a camera crew on a motorbike as they made their way around the West End.

Although Clarkson has been spotten on a bike before, the GoPro is a new addition, and perhaps surprising given that in 2011 his co-presenter Richard Hammond, a keen cyclist, had been talking on screen about a BBC News feature on cylists wearing helmetcams “so they can video examples of road rage and people cutting them up on their bikes,” to which Clarkson interjected, “But cyclists deserve it,” the exchange continuing:

Clarkson: “But they do deserve it, honestly. The other week, no honestly, there I am sitting in a traffic jam in London” – oh, the irony – “and a Frenchman, he was tried to cycle between the pavement and my car and after he’d removed most of the paint with his brake handle thing he came round to the drivers door to tell me off in that silly accent French people have.”

Hammond: “What, a French accent?”

Clarkson: “Yes, that, and I said to him, listen if you just work hard you can have a car.”

Hammond: “You are exactly the reason why I want a camera on my bicycle helmet when I cycle.”

Hammond: “When idiots like you get out of their car having cut me up – ”

Clarkson: “Who pays the road tax?”

Clarkson: “I’m sorry, I don’t mind if cyclists want to come on the road with their silly Victorian distractions, I’m not bothered, but they must behave themselves.”