Without doubt, this is the most stunningly beautiful bike to pass through the new road.cc offices this year. It’s the brand new Scapin Etika RC and it’s seen here in a very special Poshbikes (the UK Scapin distributor) custom build, decked out with an eclectic mix of Tune components, Xentis carbon clincher wheels and Campagnolo Super Record groupset. It weighs 6.72 kg (14.82lb) and costs a cool £8,500. 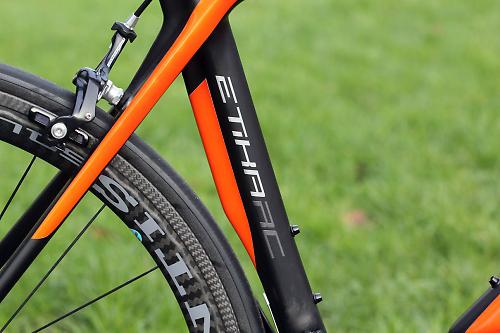 road.cc looked at the Scapin 2014 range, and the new Etika RC, briefly towards the end of last year, and we have finally gotten our hands on a bike to ride. The Etika RC represents the Italian company’s top-end race-ready offering. It's built primarily to be light, stiff and very fast. It’s available as a frameset for £3,199, or in a choice of 10 stock builds costing from £3,725 with Shimano Ultegra up to £8,175 with Campagnolo Record EPS. There are also a plethora of wheel and component upgrades available. 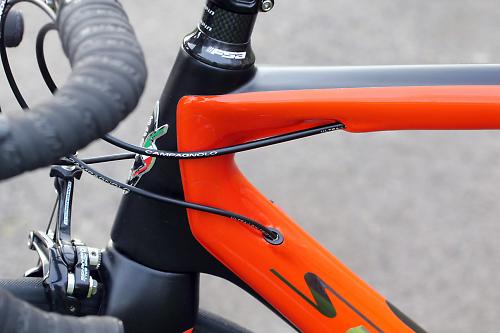 This bike is far from standard though. Poshbikes has built up a reputation over the years for producing bespoke bike builds featuring some of the lightest and rarest components available. They also do some jolly expensive custom builds. Remember the £11,000 4.26kg Olympia 849 we featured last year? That was their handiwork. The build on this bike acts as demonstrator to showcase some of the brands they supply, such as Tune and Xentis. If they wanted to build a bike to turn heads, they certainly achieved that goal. 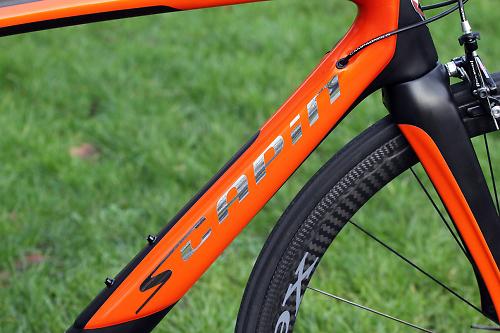 First, let’s look at the frame, the heart of the bike. The Etika RC is a new frame this year. It’s made from Toray T800 unidirectional carbon fibre and Scapin claim a 950g frame weight for a size medium. It’s not the lightest top-end frame, but it’s clear from looking at the massively oversized tube profiles that they’ve concentrated a great deal on stiffness. The down tube is absolutely massive, as are the chainstays. The top tube is oversized too. The frame is constructed using what the company calls Fluid Mould Technology (FMT), which involves expanding cores with high-pressure fluid inside the frame during the curing process. It ticks a lot of the boxes most modern top-end raced bikes do. A 1 1/8in - 1 1/2in tapered head tube, press-fit BB86 bottom bracket, full internal routing for mechanical or electronic groupsets are reasonably standard these days. The dropouts are made from carbon fibre to shave the weight, and have been reinforced, the alloy dropouts sandwich the carbon frame. A proprietary S-Way Aero seatpost, slides into the teardrop shaped seat tube. Another nice detail is the replaceable metal chainsuck guard on the down tube. There are some nice details. A metal plate on the down tube and chainstay protect the carbon in case of a dropped chain. The seatclamp is an internal expanding wedge design which keeps the frame looking clean in this area. 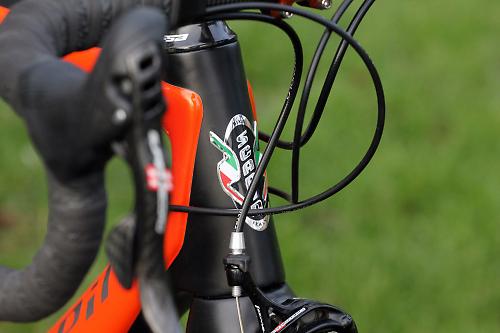 And then there is the finish. Scapin goes to great lengths painting the frames, it’s something they take great pride in, and it really shows in this frame. The photos don’t really do it justice at all (and I’m not knocking Oli’s photo skills at all) but you need to see it with your own eyes. The orange gives the frame real presence, it turns heads. Other colours are available though if it isn’t to your taste. There’s even a mad fluoro yellow option.

Geometry for the size large we have is fairly racey with 73/73 degree head and seat angles, a 16.5cm head tube keeping the front low, and the 56.7cm effective top tube gives plenty of stretch. The wheelbase is 99.6cm, which should make the handing lively. To showcase the frame, Poshbikes has given the frame a top draw build kit. A Campagnolo Super Record mechanical groupset is a wonderful thing, it just looks gorgeous and the shifting is excellent. The crankset has been upgraded to a Tune Smartfoot Standard road crank. The arms on this crank are CNC-machined from grain orientated 7075 T6 heat-treated aluminium, with a CNC machined spider in 7022 aluminium and a hollow 30mm integrated 7075 T6 axle. It’s fitted with Praxis Works Clover 53/39 chainrings - this bike is built for speed. 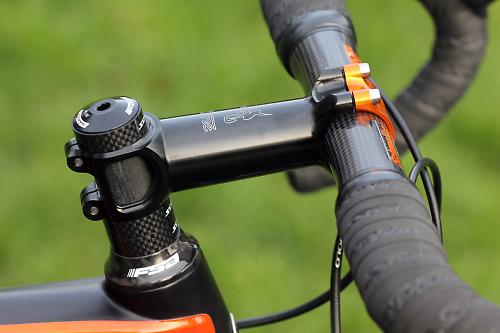 The Tune theme continues. A Geiles Teil 4.0 stem is also CNC-machined from 7075 T6 aluminium and the bolts are all titanium, to keep the weight down. Excess material has been removed at the steerer clamp, which also has the effect of showing off the carbon steerer tube as well. It weighs a claimed 98g for the 110mm stem on this bike, with lengths from 60 to 120mm available. 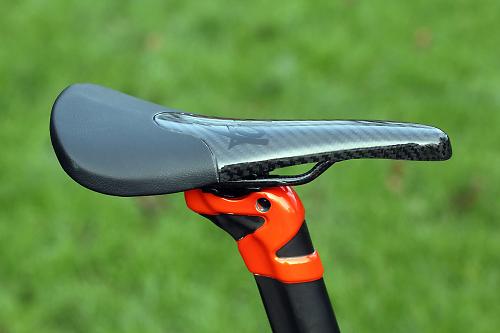 The Tune Komm-Vor carbon saddle is an interesting looking thing. It doesn’t look very comfortable does it? But I can tell you, after a short ride yesterday, that it is surprisingly comfortable. The combination of the shape, the kicked up tail, and the little flex in the carbon base, means it is actually as comfortable as a regular saddle. It’s also very light as well, a claimed 97g which is about half the weight of even a very light saddle. 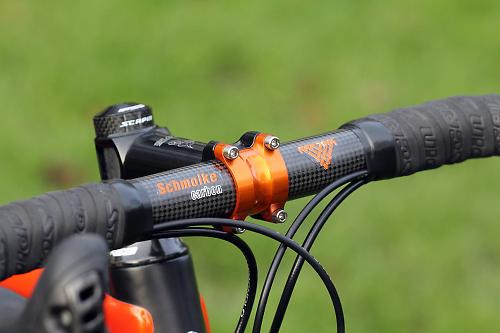 Schmolke is a German company with a penchant for producing very light components. This is the SL Compact Oversize handlebar, which weighs a claimed 160g. That’s pretty light. It has a 138mm drop and 95mm reach, so it should be comfortable and make it easy to reach the levers when in the drops. Recessed cable grooves on the underside keep it clean and smooth. 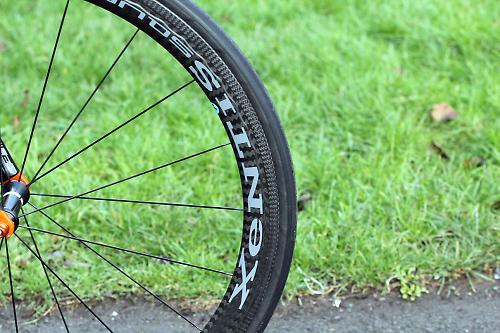 Finally, the Xentis wheels. Poshbikes announced last year that they had picked up the exclusive UK distributor rights for Austrian wheel manufacturer Xentis. The wheels actually manufactured and hand-built in Austria, and they offer some interesting technology that sets them apart from the many other wheel manufacturers on the market. 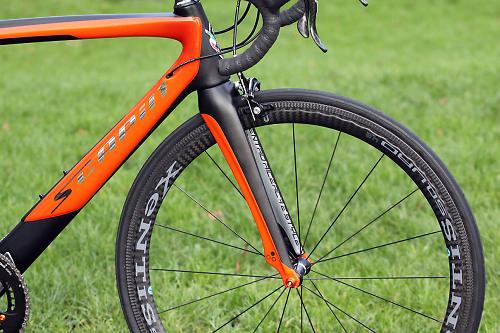 The most interesting thing about these wheels is the company’s unique 'Active Turbulator'. A wavy ridge just above the braking track essentially acts as a turbulator, designed to trip the passing air into turbulence, so the separation point is shifted further along the rim to improve aerodynamics. They sound very promising indeed. 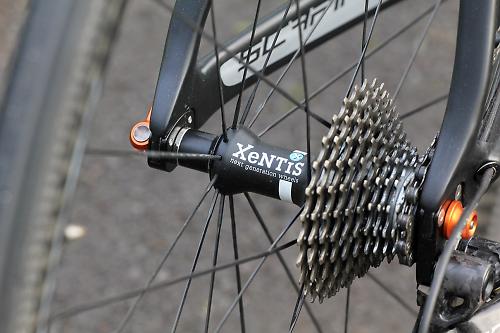 Braking performance is a big issue with carbon wheels. Xentis has developed an XBP brake track, a machined surface that apparently removes up to 80% of the resin content, and thus reduces heat buildup, the enemy of braking on carbon rims. Xentis say because of this regular brake pads can be used, but they supply their own SwissStop pads. The wheels also feature integrated spoke magnets laminated inside the carbon rims and  even  an RFID chip laminated into the carbon rims for full traceability back to its origin. 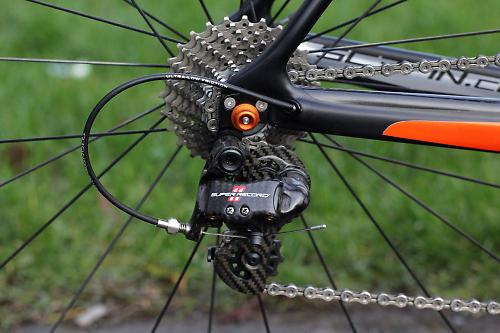 I’ve taken the Etika RC for one quick ride before writing this article, and I can confirm that it is as fast as it looks. It’s properly quick, the sort of speed I’ve only experienced from a small handful of ‘superbikes’. It’s also very direct, there is a good deal of communication through the control points. It’s lively and very easy to move around the road, and it’s planted and settled at higher speeds. Maintaining a high cruising speed is a very satisfactory feeling, and relatively easy. I’ll get some more miles in before writing my full review though.

You’ll be able to see this very bike in the flesh at the London Bike Showon stand number LB1527 on 13-16 February. In the meantime you can contact Poshbikes at info [at] poshbikes.com or their website http://poshbikes.com