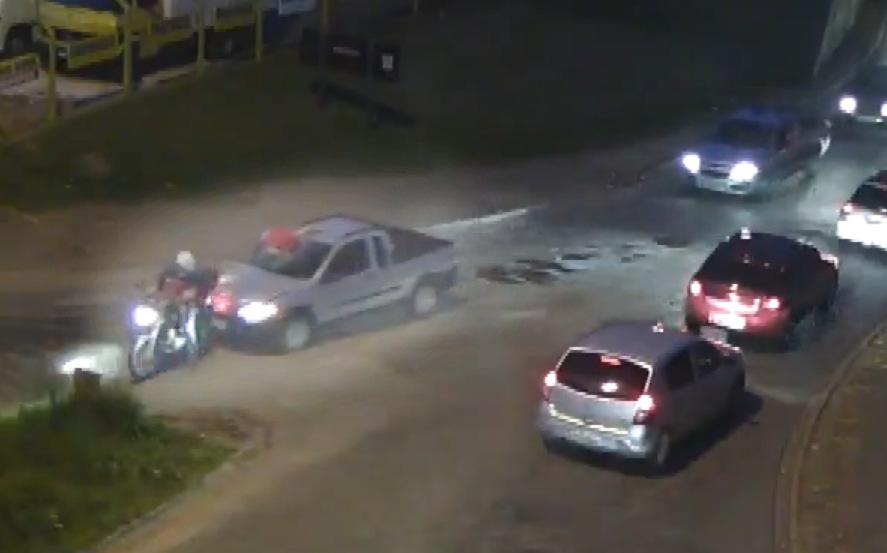 A suspected drunk driver in Brazil has been arrested after driving six kilometres with a dying cyclist embedded in his windscreen.

Jose Adil Simioni, 58, was stopped by other motorists who blocked his car in busy traffic.

Witnesses at first thought the body was a doll and they were seeing some sort of prank, but it turned out to be Marco Aurelio Dlovski who was on his way home from work when Simioni hit him on a bend.

Simioni, allegedly too drunk to realise what had happened, carried on driving with Marco’s body slumped on his car.

CCTV footage shows a motorcyclist blocking Simioni, and then onlookers surrounding his car in Pinhiaius, near the town of Curitiba, in south-east Brazil.

Readers are warned that they may find this video distressing

Police led Simioni from his car to a patrol vehicle before handcuffing him and bundling him into the back. Police bundle Simioni into a car

Marco was pronounced dead on the scene by paramedics who covered the 31-year-old’s body with a white sheet before freeing his body from the windscreen.

Eye-witness Viriginia Cordeiro, who helped stop Simioni’s car, said: “People thought at first it was a doll on top of the car.

“When I realised it was a person I began shouting to other motorists to stop it.”

One police officer said:“The driver was quite clearly drunk and had trouble walking.

“We had to bundle him into the back of our patrol car quickly to save him being attacked by onlookers.”