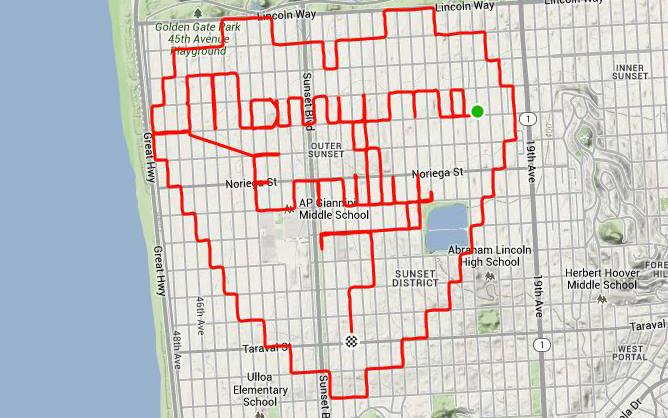 A love-struck San Franciscan has turned to ride-tracking app Strava to ask for his girlfriend’s hand in marriage.

From the saddle of his bike, Californian user Murphy M. pedaled an 18-mile route around San Francisco depicting a large heart containing the words ‘Marry me Emily’.

The lover’s ride took him an hour and 20 minutes, burning 749 calories in the process: a healthy 100 calories more than a slice of wedding cake, according to Fitness First estimates.

Murphy was not the only cyclist to use the app as an impromptu proposition tool this winter. Over on America’s East Coast, in North Carolina Strava user Steven H. mapped a ride titled ‘A question for Caroline!’

Steven’s ride was not quite as aesthetically pleasing as his West Coast counterpart. However, both rides received the desired responses from the riders' significant others in the comment section, and we hope in real life too.

Strava’s statistics for 2013 revealed that its riders spend the least amount of time in the saddle, ride slower and ride shorter distances in January than they do in any other month. So, maybe we’ll see even more elaborate, artistic or at least more articulate proposals in the coming months as rides get longer.

GPS art is a growing phenomenon, and while proposals through apps like Strava and MapMyRide are not yet commonplace, GPS bike artists have been around a while. Arguably the leading exponent of the artform over the last few years has been New York based science teacher WallyGPX, we've followed him for a while - here's a story from 2012 if you're interested.