Transport for London has warned cycling campaigners they may be “breaking copyright law” with a collection of protest images that use modified TfL posters to demand safer conditions on London’s roads.

The Stop Killing Cyclists campaign, founded by Donnachadh McCarthy and Steve Routley, organised the recent ‘die-in’ protest outside TfL headquarters. Through the group’s Facebook page they are encouraging supporters to distribute the modified posters via Facebook and Twitter. 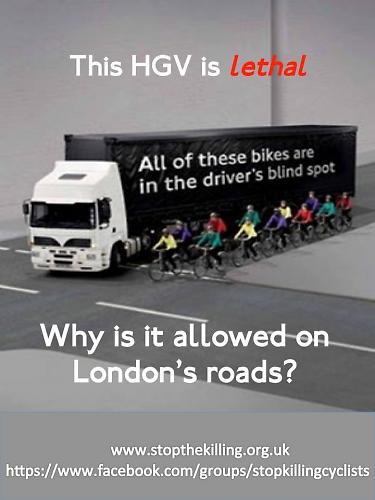 Donnachadh McCarthy told road.cc that the graphics, launched on Wednesday night, had already spread round the world to countries as widely spread as Malaysia, Pakistan, Canada, USA, Australia and New Zealand.

In a statement launching the campaign, the Stop Killing Cyclists group hit out at the police and Transport for London’s response to the spate of deaths in November last year, in which six cyclists were killed on London’s roads in less than two weeks. Stop Killing Cyclists said: “After the recent spate of cycling tragedies, Transport for London and the Metropolitan Police leadership instead of tackling the causes of the deaths and their killers, instead went on a destructive rampage of attacking cyclists and the Stop Killing Cyclists protests.

“They shamefully blamed the cyclists for their own deaths and outrageously blamed our protests for discouraging people from cycling.”

They claim that in the ensuing road safety campaign, Operation Safeway, cyclists were fined at a rate 35 times greater than drivers, proportionate to the numbers of road users, and none of that money went into the cycling safety budget.

The group also claims that Transport for London’s road safety posters blame cyclists and pedestrians for becoming road crash victims. The ‘subverted’ poster campaign is a protest against this victim-blaming.

You can see all the posters at the Stop Killing Cyclists website. 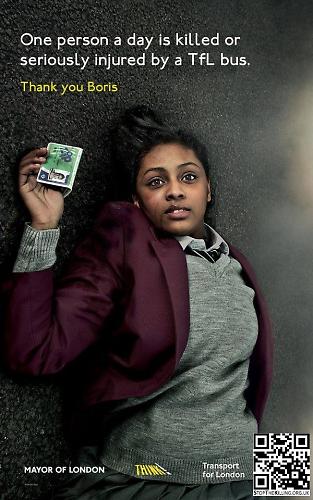 A spokesperson for Transport for London told London24: “We totally respect of freedom and speech and people’s right to protest against any policy of ours, but they must be aware they can be breaking copyright law.”

TfL also repeated the bulk of a statement made by the organisation after the die-in protest last year: “We are all shaken by the recent spate of deaths on the roads, and our sympathies are with all the friends and families of those affected.

“That’s why we are investing nearly £1 billion in upgrading the existing superhighways with greater segregation, introducing major new segregated routes and backstreet quiet routes, and overhauling dozens of junctions to give more protection to cyclists."

However, campaigners dispute the implication that TfL is spending heavily on cycling facilities.

McCarthy said: "TfL has been using the "billion" budget in every press response to our campaign - they are actually spending about £80 million per year at mo and are simply adding up 10 years notional budgets for future mayors.

"£80 million is out of an annual budget of £7,000 million and a capital budget for new Crossrail of £13,000 million that is, the usual crumbs but twice as much crumbs as under Ken."

TfL's statement continued: “Delivering such major improvements will take time, but we are working flat-out to do so. We and the Mayor have set out our plans and the first major improvements, such as the segregated extension of the Superhighway to Stratford, are now being seen.

“Over the forthcoming weeks and months Londoners will see many more improvements as the investment we are making bears fruit.”

It’s good to know the budget for cycling is not being wasted on writing new press statements.