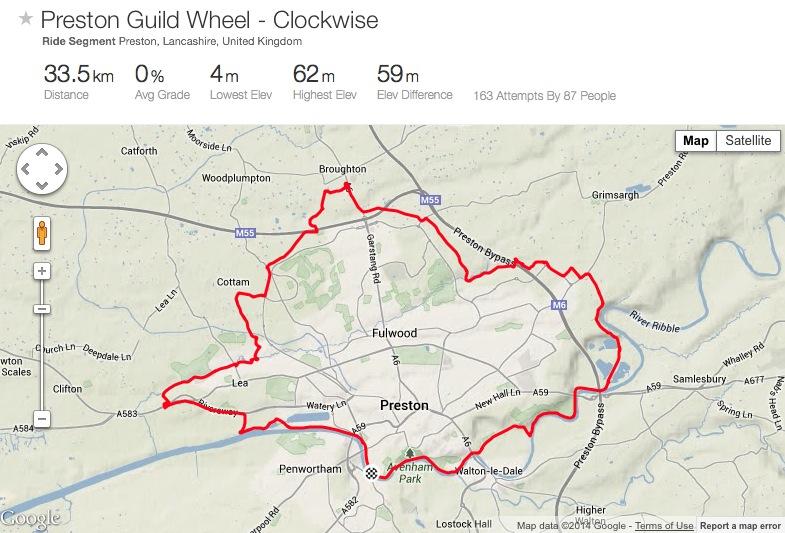 Peter Ward, the man who helped devise the Guild Wheel off-road shared path that loops around Preston in Lancashire has described cyclists who use it to chase records on Strava segments as “posers” who endanger other users of the facility – and also says that the social network and ride-tracking site encourages reckless riding on the public highway.

His comments echo concerns raised last year by Sustrans that Strava users were riding at inappropriate speeds on shared-use facilities it manages such as the Bristol & Bath Railway Path, the Two Tunnels Parkway in Bath, and one running through the Ashton Court Estate in Bristol.

It has considered placing barriers at the latter location to force riders to cut their speed, and has drawn up a code of conduct for cyclists on shared-use paths.

The 21-mile, three-metre wide Guild Wheel cycle and walking path, which is designated as National Cycle Route 622, was opened in 2012 as one of eight legacy projects of that year’s Preston Guild.

Established by royal charter in 1179, the Preston Guild was initially held every few years on an irregular pattern but has taken place every 20 years since 1542, other than 1942 when it was cancelled due to World War II, resuming in 1952.

The Guild Wheel route links five existing Sustrans routes, and the sustainable transport charity was among the backers of the project under its School Links programme.

But Ward, one of the creators of the Guild Wheel and given an MBE last year for services to cycling, author of the 1970 book King of Sports, A Textbook on Cycle Road Racing and who held a Cat-1 licence for years, says that riders going too fast on the Guild Wheel – and on public roads – as they look to set the fastest Strava segment times are spoiling it for others.

“The Guild Wheel was never intended as a race track and neither were the city’s streets,” he told the Lancashire Evening Post, which has produced a map based on information on Strava that shows various segments together with the number of cyclists attempting them and the fastest times set.

Segments have also been created on Strava for the entire route, with the record for the whole, 21-mile circuit standing at a shade over 1 hour 8 minutes.

“To me these cyclists are just posers,” Ward maintained. “If they want to race and see how they compare to other riders then there are plenty of organised races, especially time trials, they could enter which are properly marshalled and supervised.

“The Guild Wheel was designed as a leisure route. Yet these cyclists are bombing round there trying to set the best time and putting other people in danger. There is going to be a serious accident.”

Last July, Sustrans’ chief executive, Malcolm Shepherd, said: “Traffic-free walking and cycling paths are not the place for reckless cycling speed demons; they cater to a variety of users by providing a safe, non-threatening environment to travel in.

“The anti-social behaviour of a very small number of cyclists is making everyone feel less safe – it would be great for the online community to take action by pointing the finger at people doing the wrong thing.

“As we continue to campaign for greater respect on our roads, its vital those of us using bikes give respect to everyone, and slow down on walking and cycling paths.”

“Equally though, walkers can feel as intimated by fast cycling on shared-use paths as cyclists are by fast driving.

“In particular, people with physical or sensory disabilities have a right to enjoy the great outdoors without being startled, even if they aren’t actually endangered.

“As cyclists, we need to show them the same respect that we want drivers to show us on the roads.”

While most responsible cyclists would agree that shared-use paths are not suitable for riding at full pelt due to the presence of pedestrians, including people with children and dog walkers, where Ward’s views are likely to get less sympathy is his insistence that there’s no place for riding fast on the public highway either.

“I’m all for cycle racing, it’s a terrific sport,” he said. “But it has to be in controlled circumstances and, from the sound of it, there aren’t many safeguards doing it this way.

“On the open road you never know when a pedestrian or a car is going to come out in front of you. I dread to think what could happen if there was a collision. Someone could be killed.”

One place highlighted by the Lancashire Evening Post as inappropriate for riding fast is the 400-metre long driveway to the town’s crematorium, where a top speed of 29mph has been logged on the social network. According to Strava data, the segment has been ridden more than 3,000 times.

Strava has been accused in the past of encouraging people to ride their bikes recklessly as they try to gain King of the Mountain (KOM) status for setting the fastest time on a specific segment.

Last June, a judge dismissed a lawsuit brought in California by the family of 41-year-old William ‘Kim’ Flint, killed when he collided with a car on a downhill stretch of road while apparently trying to regain a KOM that had been beaten by another rider.

The following month, 37-year-old cyclist Chris Bucchere was sentenced to 1,000 hours of community service and three years’ probation after he hit a pedestrian who later died from his injuries.

Bucchere was riding downhill and went through a red traffic light while trying to better his own Strava KOM time in San Frascisco’s Castro district in March 2012, colliding with 71-year-old Sutchi Hui, who was crossing the road.

A spokesman for Strava told the Lancashire Evening Post: “To provide some insight into how Strava works, athletes on Strava can create what we call segments (essentially a stretch of road or trail) to see how they compare to others who took the same route.

“As our community of athletes creates these segments, we also give them the tools to self-regulate by allowing them to “flag” any segment they believe to be hazardous.”

We’ve looked at the Guild Wheel segments in question on Strava, and it does not appear that any have been flagged to Strava yet.

The spokesman added: “Every cyclist is responsible for their own safety and the safety of those around them. We ask all Strava athletes to exercise common sense when they are running and riding and to encourage good behaviour within our community.”