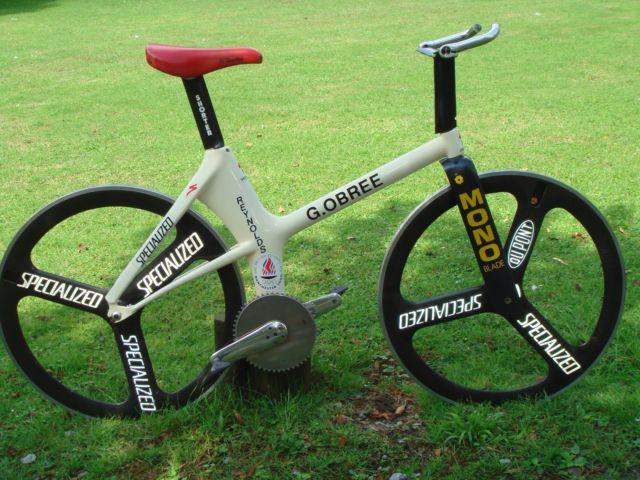 One of the bikes that Graeme Obree used to set his world hour record in 1993 is on sale on eBay.

As detailed in the film The Flying Scotsman, Obree attempted to beat the record for the furthest distance ridden in an hour – held at the time by Francesco Moser – in Hamer, Norway, on 16 July 1993.

He missed the mark by nearly a kilometre on the bike offered for sale, but with the track booked for 24 hours he had another go the following morning on his self-built Old Faithful, and set a new record of 51.596km. This beat Moser’s figure by 445 metres.

The eBay seller is Vic Haines. His description reads, “One of the 2 bikes used in the historic hour record ride, used in Hamar Oslo beating the legendary Francesco Moser's record of 51-15. Back in 1993 as the photos show the bike is in very good order having only been ridden in training and once for 1 hour, it has been on my boardroom wall for 10 yrs and then in secure storage facility.”

The bike is a carbon-fibre copy of Old Faithful. Rather than a separate top tube and down tube, it features a single tube that effectively extends into the chainstays, and a single-legged fork.

"I had modifications done at [Mike] Burrows, but he did not make it," Vic Haines told us. "I own the bike because I paid for it and a lot of other stuff to get Graeme Obree accepted as more than a circus act."

The bike has a reserve price that the current highest bid of £2,050 has not met, and the auction ends next Thursday, 9 January, at 1:46pm.

The original Old Faithful is displayed at the National Museum of Scotland in Edinburgh.

Obree rode both his world hour records in his ski-tuck position, with his chest horizontal and positioned very close to the bars and his upper arms against his sides.