UPDATED: A look at the Bianchi Infinito CV and Oltre XR2 that Team Belkin are racing this season
by David Arthur @davearthur

Team Belkin will switch from Giant to Bianchi bicycles for 2014, in a new two-year deal announced last summer. The team will have at the brand new Oltre XR2 and Infinito CV to choose from. Here's a close look at both bikes. 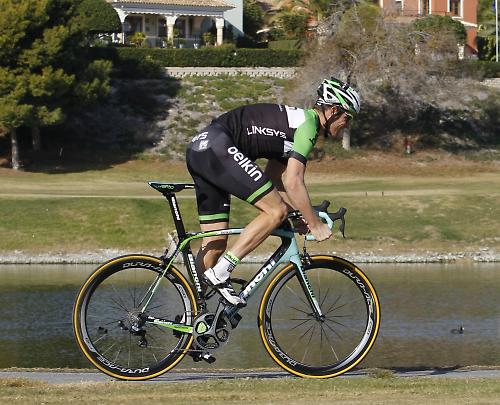 The Oltre XR2 is going to be the go-to bike for most of the team most of the time, with the Infinito CV coming into service for the Spring Classics, where its comfort and capacity for wider tyres will be an obvious benefit. Bianchi have also revealed they’re set to release a brand new time trial bike too, replacing the ageing Chrono. 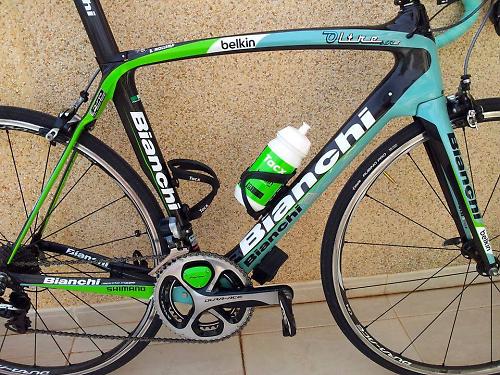 Bianchi have been busy the past couple of years, and now have some real pedigree bikes packed with the latest technology, best summed up by the Oltre XR2, the company’s lightest and stiffest ever race bike. The frame is light, a claimed 895g, and is made from UMS 40 and CN 60 ultra high modulus carbon fibre. X-Tex technology adds extra carbon strips into the frame at the head tube and around the bottom bracket area, providing extra stiffness without really adding much weight. 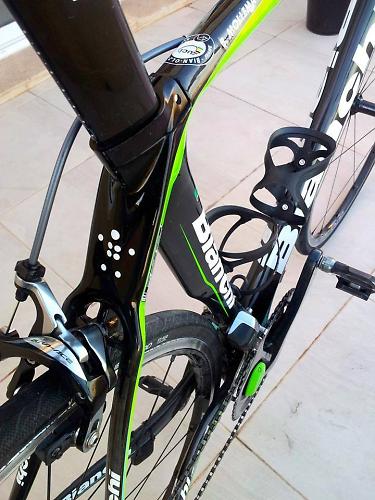 The pursuit of stiffness continues. There’s a tapered head tube, a 1 1/8in bearing up top, extending out to a 1 1/2in bearing at the bottom. A new 355g fork sits flush with the top of the down tube, with a small section flared towards the fork crown. The idea here is to reduce drag by smoothing air flowing over this section of the frame. It’s not an out-and-out aero road bike as such, but small touches like this won’t harm its pace. An aero carbon seatpost, with an integrated clamp, continues the aero theme. 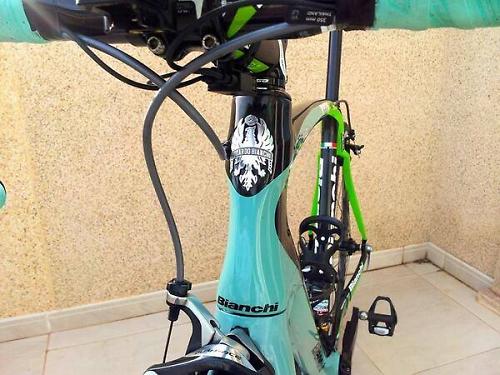 Turn your eyes to the lower half of the frame and the hugely oversized bottom bracket and chainstays stand out. Bianchi have used the BB386 EVO bottom bracket standard, ensuring compatibility with most current cranks. The rear half of the frame features skinny seatstays, Bianchi call them UTSS (ultra thin seat stay) to add a bit of comfort. Here's our first ride of the Oltre XR2 in slightly different trim, but essentially the same frame and fork.

Last year the Vacansoleil –DCM team equipped their Bianchi bikes with Campagnolo, but Belkin are sticking with Shimano. They’ll be using the company’s Dura-Ace Di2 11-speed groupsets. Bianchi tell us they’ll be using the internal seatpost battery now available from Shimano, though the couple of photos they sent show some bikes built with the older external battery. It’s likely they team will be racing with the internal battery come the first race of the season, the Tour Down Under. As with most Shimano sponsored teams, Belkin will spec Dura-Ace wheels (the C50 likely to be the most frequent choice) but they make a departure with the finishing kit, being supplied by FSA (a popular choice with many WorldTour teams). They'll use the K-Force carbon bars, OS-99 CSI stem and Orbit headsets. Selle San Marco will supply saddles and Vittoria the tyres. Like last year, Belkin will be using Pioneer’s crank-based power meter.

Bianchi released its first official photos of the Team Belkin-Bianchi Infinito CV today. This is the company’s endurance bike, designed with races like Paris-Roubaix and Tour of Flanders in mind. In fact it was at those races last year that we first saw the bike before its official release, having some final testing done. 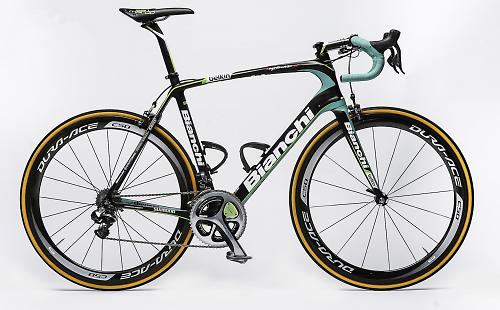 It’s also the bike that road.cc awarded the coveted Bike of the Year 2013/14 award to recently. We liked it a lot. It’s designed to be comfortable with a unique carbon fibre layup incorporating  a viscoelastic material, which Bianchi call CounterVail Vibration Cancelling Composite Technology. Or CV for short. The idea essentially is to dampen vibrations so impacts from riding over cobbles or simply rough roads are not passed straight through to your bum and hands/wrists. 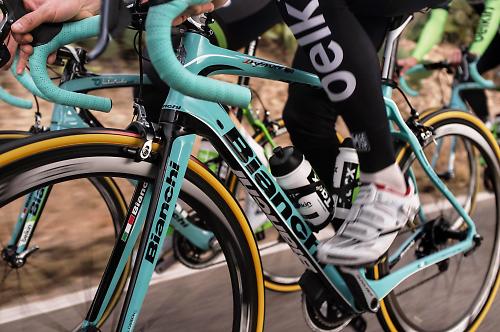 What is interesting about this bike is that for all that extra comfort, and space for up to 28mm tyres, there’s little weight or stiffness penalty. We still expect the Belkin team to choose the Oltre XR2 for most races and stages, and switch over to the Infinito CV for the Spring Classics. But it’ll be interesting to see if any choose the Infinito CV for the rest of the season. Fabian Cancellera rides the Trek Domane, a similarly pitched bike to the Infinito CV, over the lighter and stiffer Madone from Trek. You can read our indepth review of the Infinito CV here

The Infinito CV will be built with the exact same build kit as the Oltre XR2. Where we will see a difference is in the wheels, when it comes to racing the classics. Though many teams are now using almost the same deep-section carbon wheels for the cobbles as they do for regular road stages. Even in both Flanders and Paris-Roubaix, there is a higher ratio of road to cobbles. Once change we can be certain of is the use of wider tyres, the Infinito CV accepts 28mm tyres and we spotted most bikes rolling on 27/28mm tyres last year.

Another difference between the Infinito CV and the Oltre XR2 is in the geometry details. The Infinito CV has a taller head tube, 17cm on the 55cm size frame, so we'll likely see some aggressive stems fitted to get the bars into the low position that most pros favour. The wheelbase is also longer, to provide a more stable ride and comfort over rough roads, and allowing space for those wider tyres it can wear.

Is that everything? Not quite. There is the new paint job which needs mention. Team bikes usually stand out, but not always for the right reasons. While the team kit goes largely unchanged, featuring Belkin’s corporate colours of green, white and black, the paint job on the bikes is an attempt at marrying those colours with the celeste that Bianchi is famous for. Is it a successful fusion of two corporate identities? We'll let you decide...