Trek’s IsoSpeed decoupler, used on the Pavé-busting Domane road bike, has made the jump over to cyclocross with the launch of the new Boone CX, which world champions Sven Nys and Katie Compton launched this morning in Baal, Belgium at the Grand Prix Sven Nys event. The bike as currently featured on Trek’s website is available as a disc build, the Boone 5 Disc, at £2,400, and as a frameset at £1,750 with cantilever bosses. So it seems that Trek are hedging their bets and they're not ready to drop support for cantilevers just yet.

interestingly all the press pictures we have of Katie Compton’s bike show discs, but the women's race in Baal has just finished and she gave the Boone the perfect winning start; she was first over the line, but on a canti-equipped bike. 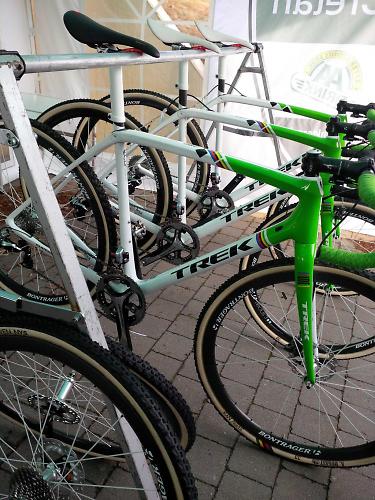 Nys’ bikes, unveiled earlier today and tweeted by the man himself, are a mix of the traditional and the new, with two cantilever bikes and one disc bike in the rack. The full range will comprise three cantilever builds and two disc builds, as well as a frame-only option for both discs and cantis. Sven followed up Katie Compton's win by taking the men's race, making it a clean sweep fro the Boone on its first day. Not bad. The geometry of the bike copies that of the race-ready Crockett alloy bike but the design is very much drawn from the road bikes. There’s the IsoSpeed decoupler, of course, which replaces the usual top tube/seat tube junction with a pivot that allows the seat tube to flex along its entire length, giving much greater deflection at the saddle and thus a more comfortable ride. That sounds perfect for bumpy ‘cross courses. The fork uses a similar design to the Domane too, with the front dropout set just behind the blade of the raked fork, a design that Trek claim is able to absorb more road (or trail) shock. The CX fork doesn’t seem to be quite as raked as the road one. The frame, at first glance, looks a lot like the Domane in its design, although obviously the geometry has been tweaked for off-road duties. It’s lower at the front and slightly longer, with a higher bottom bracket and a longer wheelbase. On the non-disc version of the bike there’s a carbon brake hanger at the rear, and a bolt-on hanger for the fork. The Boone uses the same seat mast design as the road bikes, with the seatpost sleeve tightening over the seat tube. The frame is Di2 compatible, with an internal battery mount to keep it out of the elements.

According to Trek's website you also get the same unobtrusive mudguard mounts as on the Domane; threaded holes on the rear of the stays accept a screw with a mudguard mount on the top, allowing you to fit full-length guards. Sven's bike doesn't appear to have them, although it does have a smart decal detailing his palmares. 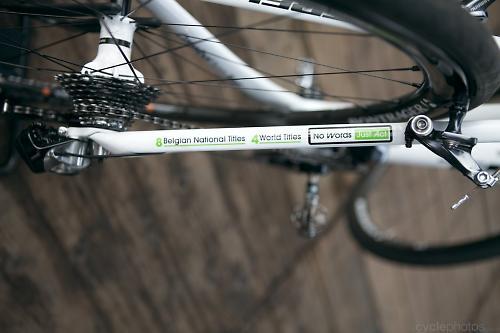 1
Cyclist punched repeatedly in the head by aggressive driver furious that group were riding two abreast
2
Residents claim cycle lane bollards are 'making life hell'
3
Ribble reportedly being prepared for sale by private equity owners
4
Near Miss of the Day 635: “Absolute moron” overtakes cyclists during sportive
5
Five cool things coming soon from Fizik, dhb, Le Col, Vulpine and Monton Sports
6
Near Miss of the Day 636: Van driver overtakes one cyclist, almost hits two others head-on
7
Driver steals cyclist’s phone after knocking her from bike – police attending say they shouldn’t have been called
8
No bikes allowed on Southern or Thameslink trains this Sunday due to London to Brighton Cycle Ride