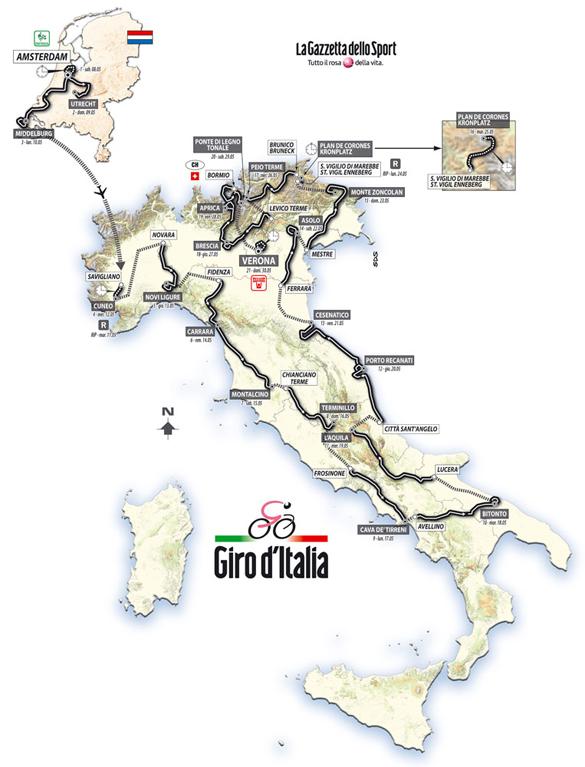 The route of the 2010 Giro d’Italia was announced yesterday in Milan – but that’s as close as the race will get to the Lombard capital this year in what is seen as a snub to the city after chaotic scenes greeted celebrations of the Giro’s centenary there back in May.

Stage 7 of this year’s Giro, won by Mark Cavendish, was meant to have provided a showpiece race on a circuit through the centre of Italy’s fashion and financial capital. But with cars parked on the route and tramlines also posing a danger to riders, organisers RCS Sport, who also own the Gazzetta dello Sport newspaper, agreed to neutralise the times taken on the stage after a go-slow protest by the peloton.

The race traditionally ends in Milan, although this year’s centenary edition, won by Dennis Menchov of Rabobank, was marked with a last-day individual time trial into Rome, and the 2010 edition will likewise end with a race against the clock, this time in Verona, with the finish line inside the city’s famous Roman arena. There's also a return to tradition with a tough final week in the mountains.

Like this year’s Vuelta and 2010’s Tour de France, the race starts in The Netherlands, with Amsterdam hosting not only the opening day’s 8.4 kilometre time trial on Saturday 8 May, but also the departure of the next two stages, both 209 kilometres long and taking the riders to, respectively, Utrecht and Middleburg.

After a rest day, racing gets under way again in Italy on Wednesday 12 May with a 32.5 kilometre team time trial – a feature that has been dropped from next year’s Tour de France – from Savigliano to Cuneo.

The following day’s Stage 5 sees the race honour one of Italy’s greatest cyclists, as it marks the 50th anniversary of Fausto Coppi’s death, passing through his birthplace of Castellania on its way from Novara to Novi Ligure, where the five-time Giro winner lived most of his life.

After heading south down the Tyrrenhian coast, the Giro swings back north through the regions bordering the Adriatic, including finishes in L’Aquila, site of last year’s earthquake, and Cesenatico, Marco Pantani’s home town on Stages 11 and 12, respectively.

The 2009 route meant that this year’s Giro lacked the race’s characteristic last week, typified by some pretty serious mountain stages in the north of the country. Well, they’re certainly back with a vengeance this year, Stage 14 taking in Monte Grappa, followed by two days in the Dolomites on Stages 15 and 16.

The first of those, departing from Venice’s ugly sister, Mestre, finishes with a summit finish on the Zoncolan and is followed by a rest day, while the second, an individual time trial from San Vigilio di Marebbe to Plan de Corones is only 12.9 kilometres long, but on gravel roads and with the last kilometre at an average gradient of 24%.

After a couple of easier stages, including a flat one to Brescia that will no doubt be welcomed by any sprinters left in the race, two Alpine stages lie in wait. Stage 19 to Aprica takes in the Mortirolo climb, and Stage 20 on Saturday 29 May is bound see some fireworks in the general classification, with an excursion into Switzerland for a long climb up to Forcola di Livigno before heading back into Italy to go over the Gavia and finish on the Passo di Tonale.

The race concludes with Sunday’s 15.3 kilometre time trial in Verona, finishing inside the Roman arena more readily associated with opera than cycling. However, it has in the past played host to some two-wheeled drama – in 1984, it was where Francesco Moser edged out Laurent Fignon in an individual time trial to claim the overall race win.

With the Tour of California moved back in the calendar this year to clash with the Giro, Lance Armstrong will definitely be missing, and with the three US-based ProTour teams - RadioShack, Columbia-HTC and Garmin-Slipstream - likely to have to commit to both races to keep sponsors happy, they could have some selection headaches.

For a start, it’s not yet known which race Columbia-HTC’s Mark Cavendish, who took four stages of the Giro last year including the opening team time trial that put him in the leader’s maglia rosa, will choose to compete in.

Bradley Wiggins used Twitter to say that he was “loving the 2010 Giro route”, and the opening individual time trial must give him a great chance to pull on the pink jersey – although whether he’d be swapping it for a Garmin-Slipstream jersey, or a Team Sky one, is anyone’s guess right now.