Cargo bikes are nothing new, but the Butchers & Bicycles Mk.1 from three Copenhagen-based designers aims to make riding them less unwieldy and cumbersome, and more fun, by using a tilting design that makes it ride just like a normal two-wheel road bike.

The work of three designers and engineers, Morten Mogensen, Morten Wagener and Jakob Munk, the cargo bike gets its name simply because they’re based in the meat packing district of Copenhagen. They say the reason for designing the cargo bike is because they feel cargo bikes “ have so far lacked the joy of cycling.” So they've set out to design a cargo bike that rides like a regular road bike. Here's a video of the cargo bike in action:

The cargo bike market is well served already. There is the similarly Danish Christiania tricycle, first introduced in 1978, and the Bakfiets. But unlike the Christiania - the rear section, saddle and rear wheel tilt and pivot when turned through a corner and the steering front wheel of the Bakfiets - the Butchers & Bicycles Mk.1 has a design that tilts the entire cargo bike over so it can take corners at speed with no risk of toppling over. Much like a normal road bike.

Key to the bike are pivoted parallelogram arms at each front wheel. These allow the main chassis of the bike to pivot over through turns, while the wheels remain parallel to the bike so it can lean easily. It doesn’t hold you upright like most cargo bikes. Judging by the video it looks to produce a very easy riding style. It’s not the first time such a design approach has been adopted, the German Veleon cargo bike is vaguely similar. 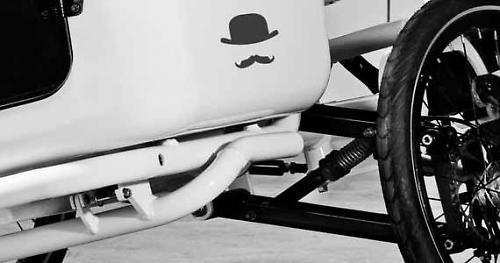 It’s said that 25% of families in Copenhagen with two or more children own a tricycle. They’re not just used for transporting small children, they’re also well suited for deliveries and courier duties, able to lug heavier and bulkier loads than regular bicycles. We’re already starting to see more on UK roads, but there’s a long way to go before they become a regular fixture.

The bike in the video is seen with a belt drive, and it will take a Bosch motor and battery if you wanted. It’ll be available in January 2014 says the company, no word on pricing or UK availability at this stage. Check them out at www.butchersandbicycles.com