Last week photos taken by photographer Von R Buzard at a US cyclo-cross race confirmed that SRAM is currently developing an electronic groupset. SRAM clearly isn’t fazed by the publicity, as the same chap, most likely a SRAM employee, has been out testing the new groupset again, and Von has sent us over these photos. The photos give us a bit more of a clue as to how the groupset might look, but there isn't any information forthcoming from the company so we can only speculate. We can only guess at what stage in the development cycle the groupset is, but from the reasonable level of finish we reckon it must be pretty close to ready. SRAM has a habit of using cyclo-cross riders to test its latest kit, it was in similar races that its hydraulic disc brakes were first spotted in the wild. 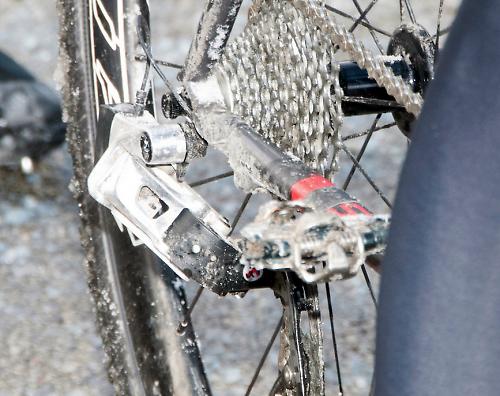 What can we speculate then? Well, it looks like the derailleur has a motor mechanism bolted to the rear, with the wire protruding from the top and snaking away into the frame, much like Shimano’s Di2 groupset. Looking closer reveals the P-knuckle of the mech (at the end of the parallelogram) appears very different from a regular SRAM Red derailleur, so we wonder if that is the motor and the black housing contains the brains. The rest of it looks much the same as a regular SRAM Red derailleur. 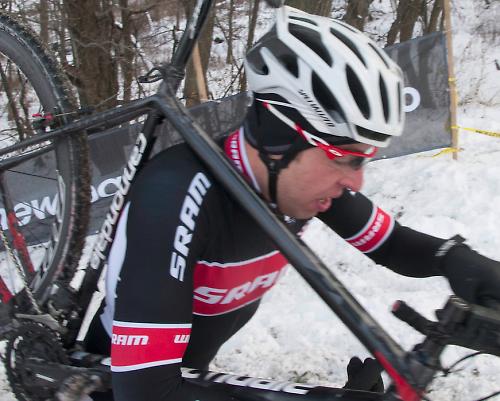 This photo shows us a reasonably clear glimpse at how the front derailleur looks, with the motor and protruding wire atop the mechanism. What looks likely to be the brains of the groupset, or equally the battery, is mounted on top of the stem. Well, taped to the stem is more accurate. If it’s a battery it does look on the small side compared to the size of battery featured on Shimano Di2 and Campagnolo EPS groupsets, but SRAM could be using a small battery purely for testing purposes. Equally, SRAM might be looking to keep the weight of the groupset as low as possible, and a small battery is one easy way to shed a load of mass. And if they've shrunken the battery, they could fit the brains of the groupset into the same small box. That makes packaging the groupset on a bike far easier than both Shimano and Campagolo currently. 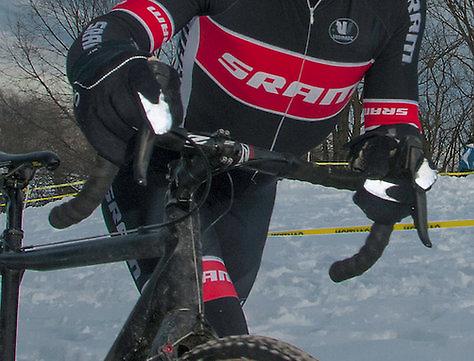 Also showing a bit more clearly, though not enough to make any detailed observations, are the new shifters. There’s been some speculation as to how they might adapt DoubleTap on an electronic groupset, even if it’s possible at all. From this photo it does look like DoubleTap, with the telltale single lever behind the brake lever. Would SRAM develop a new shifting system for electronic? From this photo it doesn’t look like it.

That's our speculation based on a couple of blurry photos anyway. We're sure more details will emerge soon.