Royal Mail to phase out bikes in 2014

One of Britain’s most iconic sights, the bright red Pashley Mailstar Royal Mail delivery bike, is to go the way of the dodo in 2014. And from the comments of many postmen, it won’t be much missed.

While health and safety concerns have inevitably been blamed by some, postmen who’ve responded to the article say that the system of vans and trolleys that has largely replaced bikes is easier, faster and more efficient.

PostmanHat writes: “I’m a lifelong cyclist and don’t drive, but push bikes are entirely impracticable for the weight and volume that we now deliver.

“How would like to tow 100-150kg up even the mildest incline? The rounds would take forever. Vans are the best of the options on the table at the moment, though those bikes might suit some rounds.” 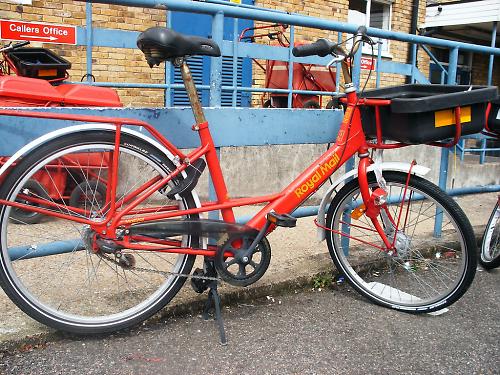 It seems the issue is twofold: the Royal Mail now delivers a far greater volume of parcels than in the past, thanks to online shopping, and the previous system of bikes and vans involved bag drops on the postman’s route, which raises concerns for the security of the mail in those bags.

Cycling charity CTC has conducted a campaign to keep posties on bikes, with support from some postmen. The organisation’s campaigns and policy director, Roger Geffen, says: “There are plenty of operators who recognise that bike is an extremely efficient answer, you have just got to find the right bike.

“I cannot see why they think the traditional post bike isn’t appropriate for the loads they’re carrying. When CTC did our Keep Posties Cycling campaign three years ago, at first [Royal Mail] just ignored us, until we arrived with a very large number of letters delivered by post bike.”

Geffen concedes that Royal Mail did look at the alternatives, but needs so many bikes that sourcing enough cargo bikes was a stumbling block.

As Geffen says, some operators are using bikes to deliver mail. TNT Post has 1,000 bikes and delivers 95 percent of its mail by bike.

But Mailman57 points out: “At the moment TNT only work in urban areas with delivery areas only a short distance from their delivery office. Further, they do not delivery the volume of mail or parcels that the Royal Mail postman delivers.”

While many postmen are convinced the new system is better, Roger Geffen says others would love to continue to use bikes.

He said: “There are plenty of posties that are totally convinced they could use a light freight bike, that they could find a way of spreading out the parcels. They don’t like the idea that they are going to be cooped up in a van when they could be outdoors.”

“As far as we are concerned this isn’t the end of the story; we understand from Royal Mail their vans have a lifespan of about five years, and if they find they are being undercut by these companies or if they find the health of their work force suffers there is time to have a rethink. What they are doing is reversible.”

Bikes are expected to carry on being used in a few places where a cluster of houses with long driveways makes deliver by trolley very time-consuming. 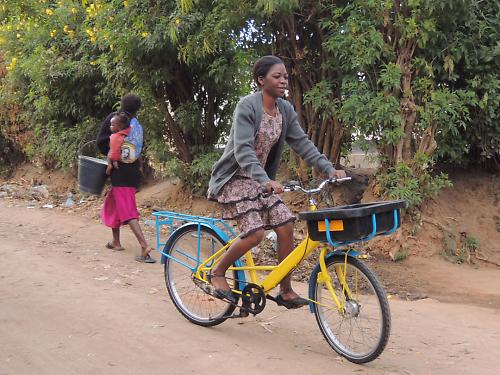 A refurbished bike in use in Malawi (©Mobal Communications)

And if you’re wondering where the old bikes are going, a telecommunications company called Mobal has been shipping them to Malawi, where they are refurbished and sold as sturdy, practical transport.

So Royal Mail bikes will still be making deliveries in Africa, and in the mansion belts of Surrey and Cheshire.