The Ineos Grenadiers – formerly Team Ineos – will race this year's Tour de France on the Pinarello Dogma F12 fitted with Shimano Dura-Ace Di2 components and probably wheels from Lightweight, even though Shimano is the official sponsor. 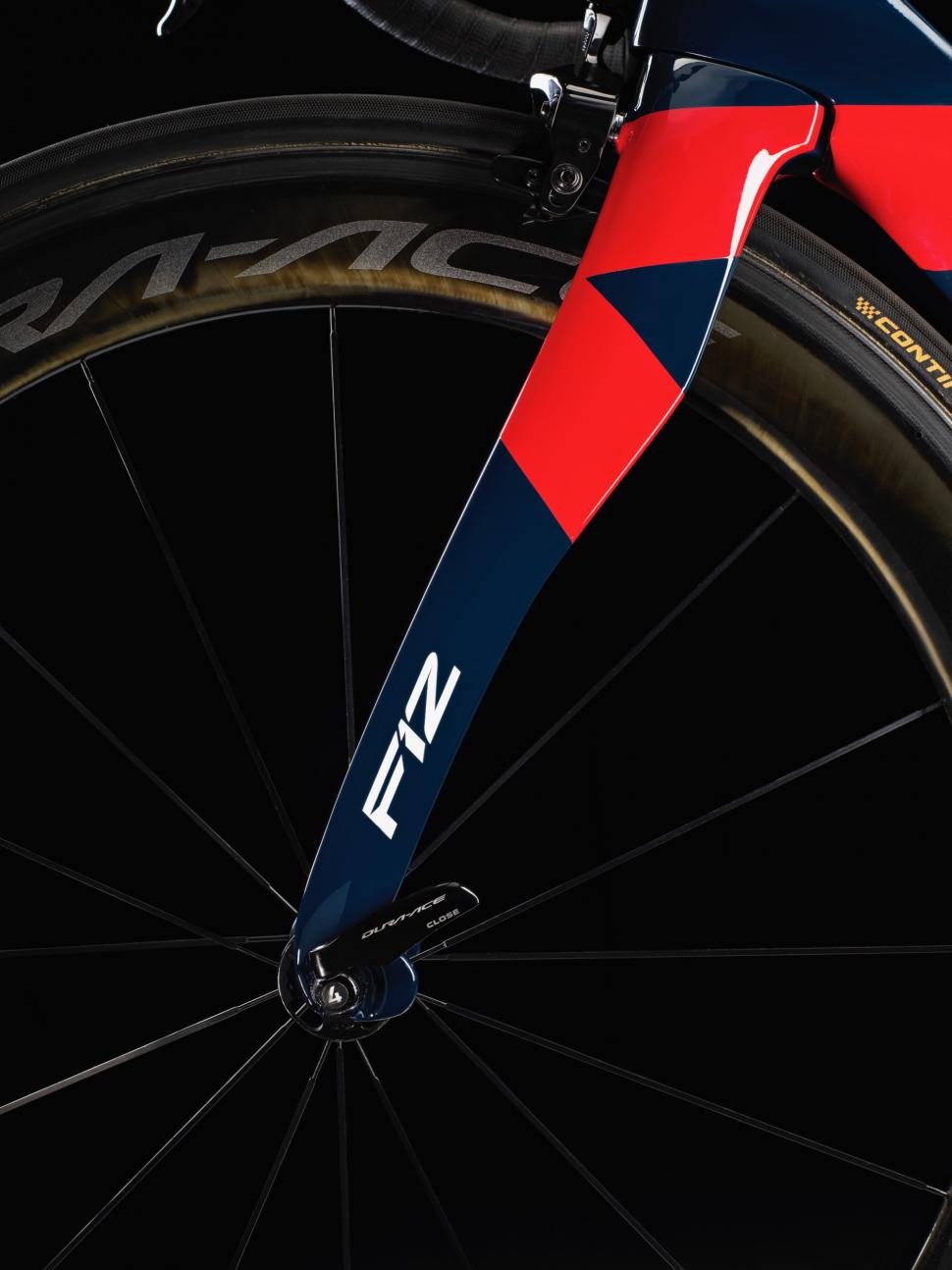 The team's stable of bikes is unusual in a couple of ways. First, Ineos Grenadiers don't use disc brakes, they use direct mount rim brakes (a bolt holds each arm directly to the frame/fork rather than a central bolt for the whole brake unit being used). Some teams ride exclusively with disc brakes now while others, like Jumbo-Visma, divide their time between disc brakes and rim brakes, but Ineos Grenadiers don't use any disc brake bikes at all, even though a disc brake version of the Dogma F12 is available. The team has looked for its famous marginal gains and decided that discs aren't for them. 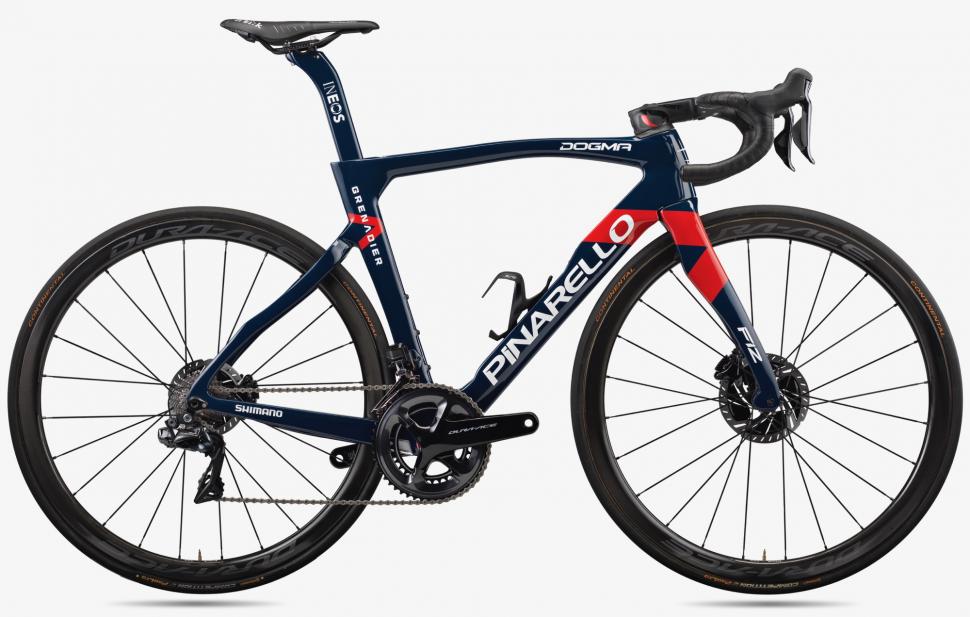 A second way in which Ineos Grenadiers' bike choice is unusual is that the majority of riders use the Dogma F12 for every stage other than time trials. For years riders from most teams have choosen between a lightweight road bike and an aero road bike depending on the terrain and their personal preferences – Trek-Segafredo riders have the Trek Emonda and the Trek Madone at their disposal, for example – but Ineos Grenadiers use the Dogma F12 for everything.

The team isn't unique in this respect – Deceuninck-Quick-Step and Bora-Hansgrohe have recently started to use the Specialized S-Works Tarmac SL7 for all road stages, the Venge having been deemed surplus to requirements – but it's uncommon. 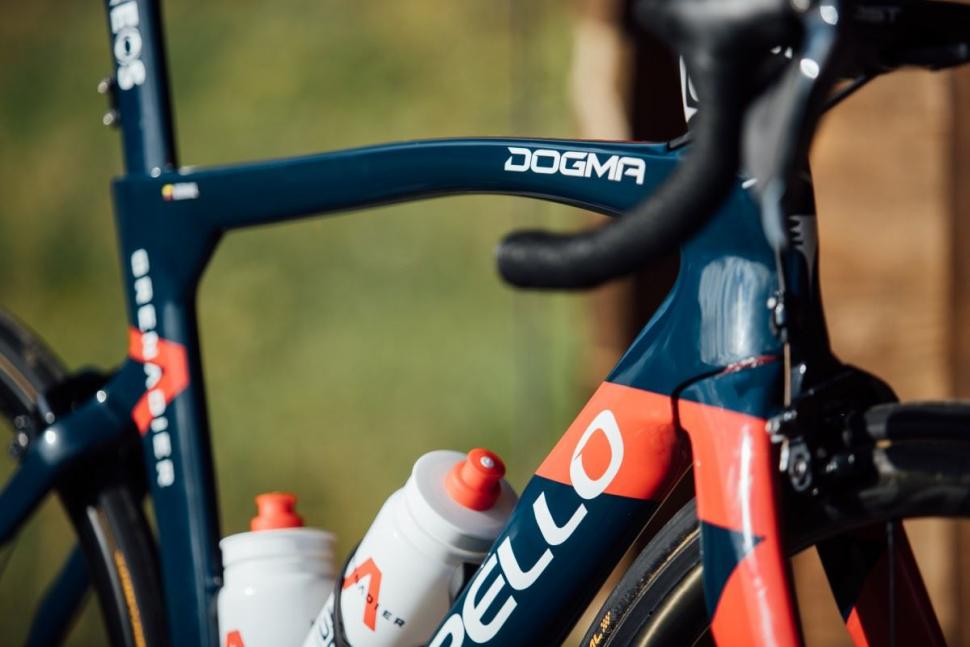 That said, some riders will be on the Dogma F12 X-Light (main pic), which is kind of a different model but with the same frame profiles and geometry. The X-Light version uses Torayca T1100G unidirectional carbon rather than the usual T1100 1K, with a different resin content. 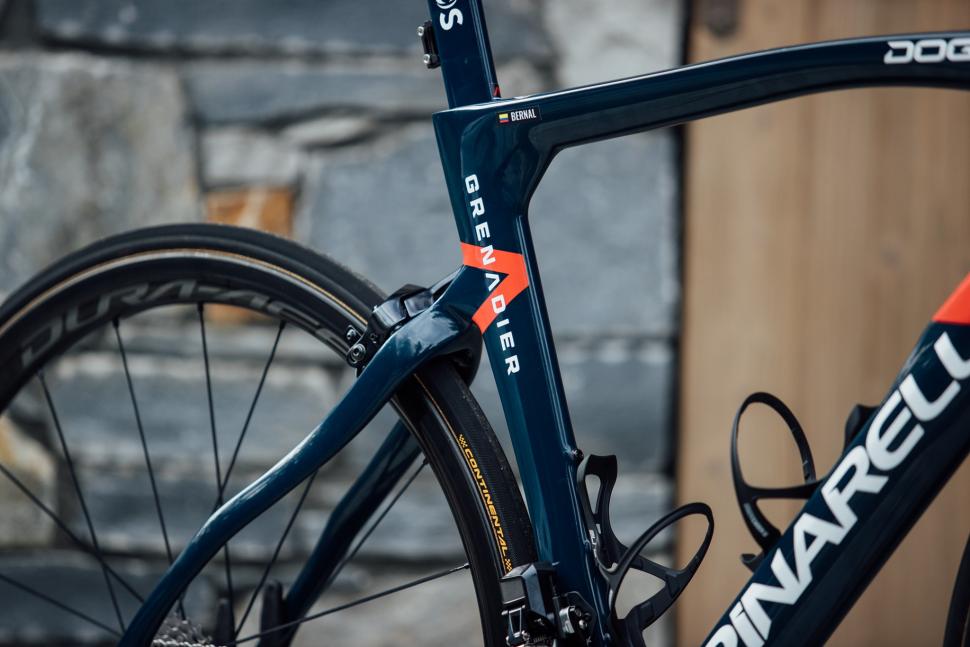 "Also using specially made moulds and a slower and more controlled production process, we were able to achieve a weight reduction of over 60g on the frame kit," says Pinarello.

Egan Bernal (the outdoor pics here are Bernal's bike) and Richard Carapaz are both likely to be on the X-Light model.

The Dogma F12 was announced in May 2019 and it's the bike that Team Ineos, as it was called then, raced last year's Tour on.

A key focus of the update from the F10 was on improving aerodynamic efficiency. The concept of the Flat Back down tube profile – shaped to reduce drag but with a squared off rear – was retained but it was made narrower and Pinarello looked closely at the junction with the head tube and the area behind the fork crown to smooth airflow as much as possible. 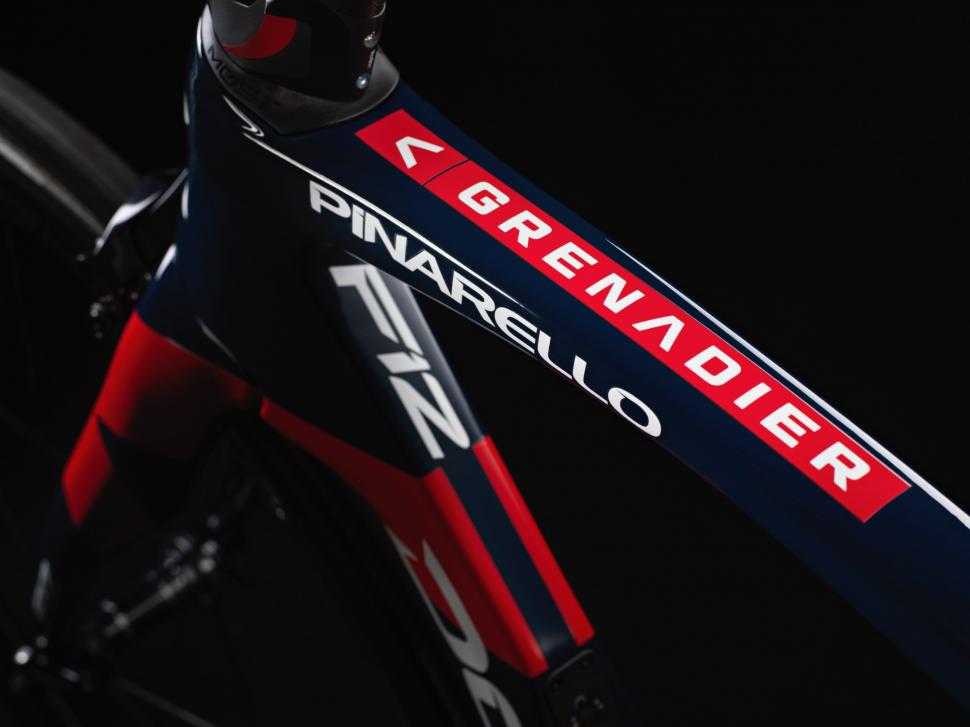 One aim of the Flat Back down tube is to reduce drag around the water bottle; the two different elements are designed to work together in terms of aerodynamics on the basis that the majority of riders will ride with a bottle in place most of the time. Pinarello reshaped the bottom bracket shell on the F12 to allow the bottle cage to be mounted 5mm lower than previously in order to improve ariflow. While we're mentioning water bottles, riders can choose between two different cage positions on the seat tube, the upper one being more accessible and the lower one offering less drag. Whereas the Pinarello Dogma F10 had external cables between the handlebar and the front end of the frame, the gear cables and rear brake cable are internal on the F12, only the front brake cable running externally, the idea being to reduce drag. You see the occasional top-end race bike still launched with external cables at the front – the updated version of Giant's TCR Advanced, for example – but the vast majority have fully internal cable routing.

Pinarello had to increase the size of the upper headset bearing to 1 1/2in to provide the extra space necessary for the internal cable routing, so it now matches the diameter of the lower bearing.

It also fits the bike with an updated version of its Talon handlebar, the Talon Ultra integrated bar and stem, said to be 8.6% stiffer and 10.3% lighter than the Talon Aero, with 5% less drag (great use of stats from Pinarello there). The handlebar features a channel for the cables while the rear of the stem section is enlarged to allow the cables to be routed into the frame. 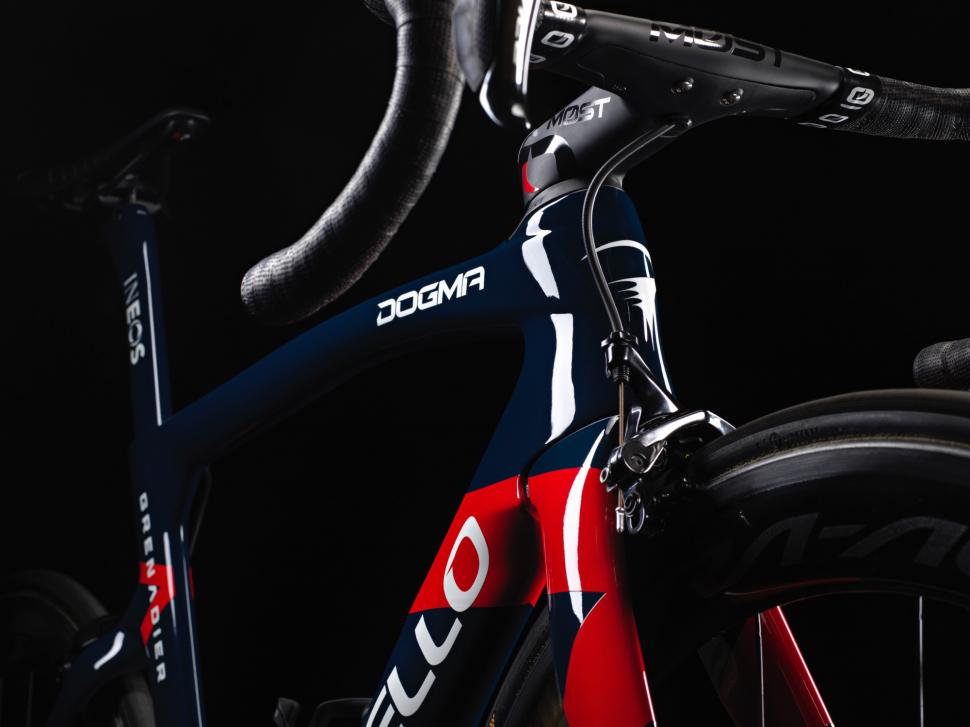 Two-part interlocking headset spacers allow the height of the front end to be adjusted without the need to disconnect the brakes and derailleurs – an academic point in Bernal's case in that he doesn't have any spacers fitted.

Pinarello says that the F12's redesigned bottom bracket and beefed up chainstays improve stiffness by 10% over the F10.

Pinarello claims that an unpainted Dogma F12 frame weighs 820g. As mentioned up top, it also says that the X-Light version saves about 60g.

The bikes have been given a new navy blue and red team-branded finish for the Tour de France. This finish will be available on bikes available to the public (rim and disc-brake versions of both the Dogma F12 and the Dogma F12 X-Light) from November.

Ineos Grenadiers is one of 14 WorldTeams (out of 19) that use Shimano groupsets (the three wild card teams in this year's Tour all use Shimano too).

Shimano supports teams in different ways. It provides components free of charge to some teams and just provides technical support to others, those teams buying their equipment (it wouldn't look good if a particular Shimano component failed to work at a crucial stage in a race due, so the brand provides tech support across the board). Ineos Grenadiers falls into the first category and, like other Shimano teams, it uses Dura-Ace Di2 components.

Shimano usually updates its top-level groupset about every three years and the current incarnation of Dura-Ace Di2 is overdue a revamp. We fully expect one before long, probably next year.

Shimano always gives new Dura-Ace components to its pro teams for final testing prior to release so it could be that we'll see some on bikes before the race is done. We doubt it, though – if you want to keep something under wraps you don't put it on an Ineos bike in the Tour de France – but we'll keep our eyes peeled just in case.

Shimano officially provides wheels for Ineos Grenadiers too, hence their appearance in these pictures. However, some team members used wheels from Germany's Lightweight at last year's Tour and the whole team used Lightweight wheels in the Dauphiné earlier this month. Lightweight's Meilenstein Obermayer wheelset has a claimed weight of just 935g, which is lighter than anything from Shimano.

You don't often see kit from non-sponsor brands on Ineos bikes – Chris Froome's Osymetric chainrings being a notable exception – and Lightweight insists that it doesn't give free equipment to anyone, so the team obviously rates these wheels hugely.

Fizik provides Ineos Grenadiers' saddles – that's an Antares on Bernal's bike pictured at the top of the page – and the tyres come from Continental, usually Competition Pro Ltd. The bottle cages are from Elite, Leggero Carbons in this case.