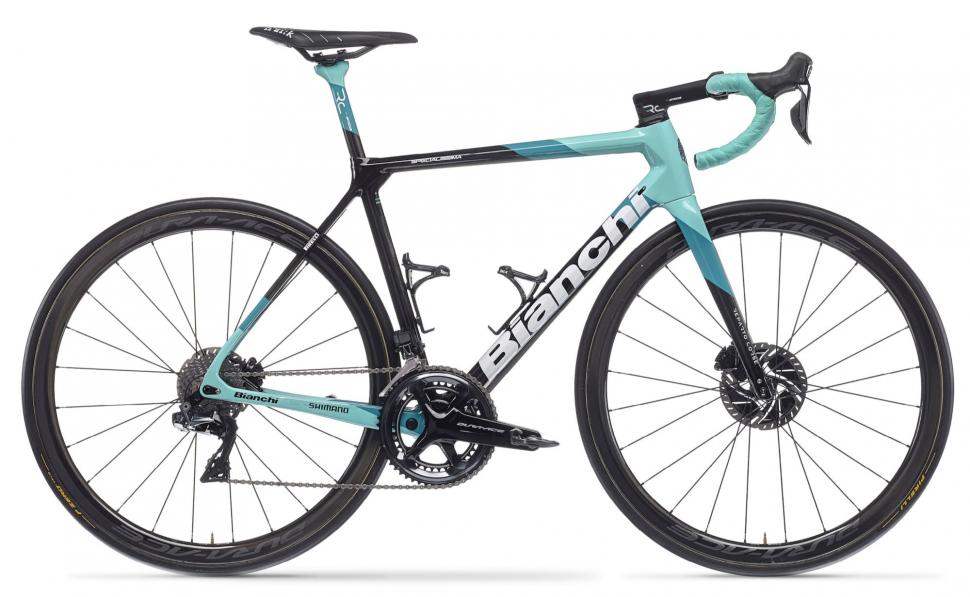 Check out one of the WorldTour's newest bikes
by Mat Brett

Australia’s GreenEDGE Cycling, racing as Mitchelton-Scott in 2020, will be known as Team BikeExchange this year and riding bikes from Bianchi, including the new Specialissima CV Disc. Both men’s and women’s teams will also race on the Oltre XR4, although the disc brake version rather than the one with rim brakes that Jumbo-Visma were using last year.

The Specialissima is the lightweight road bike in Bianchi’s range, introduced with rim brakes back in 2015. Disc brakes have now been added for the first time.

Find out all about the Specialissima CV Disc road bike

The frame weight is identical to that of the rim brake Specialissima and the full-carbon fork has a claimed weight of 370g. Both the frame and fork accept tyres up to 28mm wide.

Bianchi says that the Specialissima CV Disc features aero improvements that have been carried over from its Oltre aero road bikes, including tubing that’s shaped to reduce drag, internal cable routing, and an integrated seat clamp.

The CV in the name stands for Countervail. This is technology that Bianchi has been using in high-end models for several years. Countervail is a structural carbon system with a viscoelastic resin that’s embedded within the frame’s layup. The idea, according to Bianchi, is that it cancels out road vibration to reduce muscle fatigue and save energy while improving handling and control.

Like the majority of WorldTeams, Team BikeExchange uses Shimano’s top-level Dura-Ace Di2 groupset. We’re expecting Dura-Ace to be updated some time in 2021, although we don't know exactly when.

The wheels come from Shimano’s Dura-Ace lineup too, fitted with tyres from Pirelli – P Zero Velos, in this case.

Saddles come from Fizik – this is an Arione – and Tacx provides the bottle cages.

Read our review of the Fizik Arione R1 saddle

Jumbo-Visma went with black frames in key races/stages last year as a means of saving weight, but Team BikeExchange bikes feature a lot of Bianchi’s signature celeste along with a new turquoise-celeste shade.

It’ll be interesting to see how much race time Team BikeExchange spends on the Specialissima and how much on the Oltre XR4. As top-level race bikes go, the Oltre XR4 is knocking on, having been launched back in 2016. The typical lifespan is about three years before it's redesigned or replaced, so it could be that the riders will be on another new bike soon.