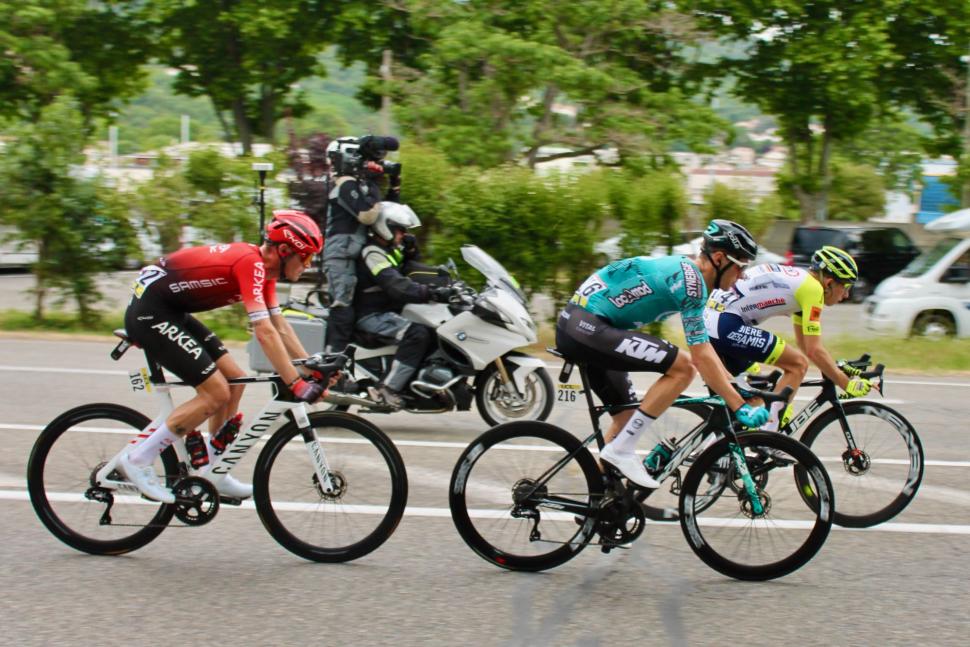 Are the bikes the pros ride in the Tour de France the same as you can buy in the shops?

Tour de France tech questions: how the pros’ bikes are the same… but different
by Liam Cahill

During the Tour de France, we wanted to provide some answers to those questions you're too afraid to ask, fearing they might be silly or that you’d be stuck talking to that weird cycling person in the office about something called ‘Di2’ for your whole lunch break.

This topic concerns the item that transports the riders around their lap of France, the humble bicycle itself. You might have heard that the pros' bikes are extra-special, but what makes them so eye-wateringly expensive? Surely they’re just like the bikes you can buy in your local bike shop?

But it would too simplistic to say that the bikes are identical so let’s dive a little bit deeper and look at the individual parts that make up a pro bike. Some you can buy, some are arguably worse than the stuff you get as stock, and there are plenty of tips that we can take from pro race bikes.

The main component in any bike is the frameset and the ones that you see in the shops are the same as the ones that the pros are riding. 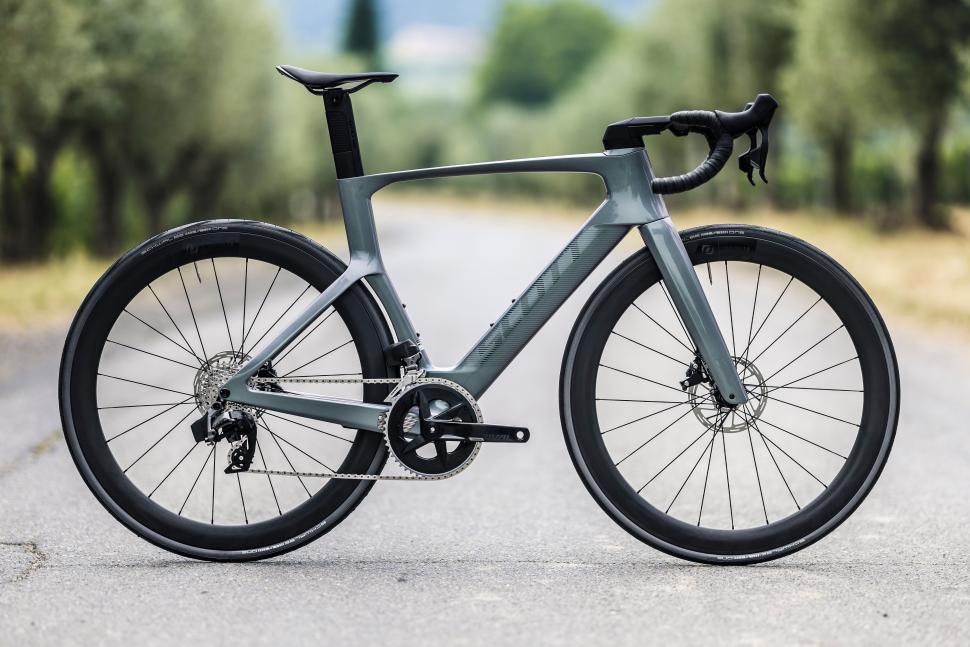 Of course, the pros have the lightest, stiffest versions of those frames, and they have them well ahead of general sale, but you should be able to get your hands on a frame that's the same as your favourite rider’s.

There are still instances where a top rider will have a good strop when a rival gets a frame that they believe to be better, and you can usually find at least one pro rider per year who is bad-mouthing their old bike when they leave for a new team. 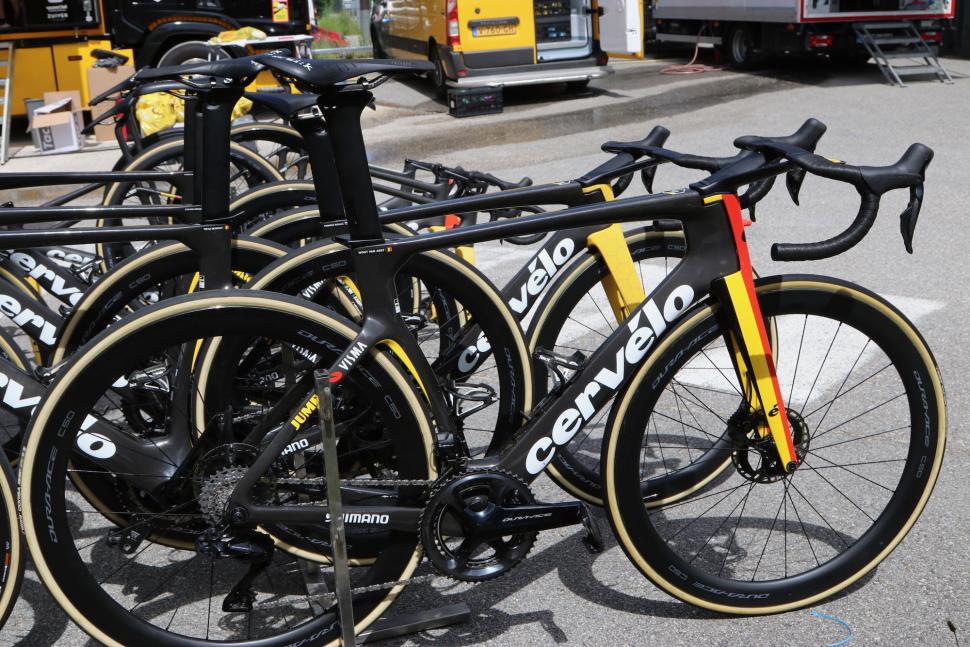 If we wanted to fire up the rumour mill – and we absolutely do want to do that – there have been notable cases where the big riders have requested their sponsors make one-off bikes just for them with special geometries. That list includes names like Fabian Cancellara and Peter Sagan who both had custom-made versions of their team’s new race bike because they didn’t like the geometry (the frame’s measurements) of the standard-issue bike.

Sagan is one of the biggest names in the men’s professional peloton and his status within the sport means that he can request stuff like that. Riders that are lower in the pecking order simply have to put up with what they get.

One team folded after continued issues with its bikes, which were blamed for costing the riders wins. The team then blamed a lack of invitations to races and a failed merger with another team for their demise.

There’s rarely any groupset component on display that you won’t find on high-end bikes in your local bike shop. You might find the odd pro bike sporting a non-sponsor correct power meter, but the electronic shifting provided by the main three groupset manufacturers is so good that we rarely see anyone stray from their sponsor's product. 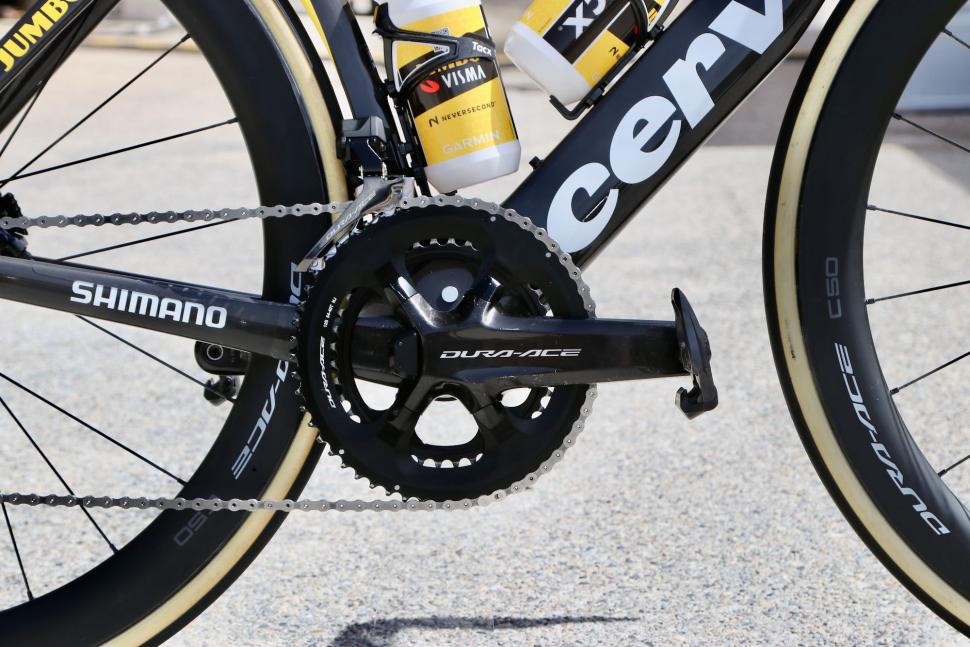 Back in 2019, we did see some of the SRAM-sponsored Trek-Segafredo riders using Shimano’s Di2 sprint shifters instead of the SRAM Blips though.

Speaking of sprint shifters, you’ll also find many modified satellite shifter buttons that the riders can use to shift gears when resting their hands on the tops of the bar. You can certainly buy these special shifters with your new bike, but we'd recommend asking the mechanic if they could fit them for you. 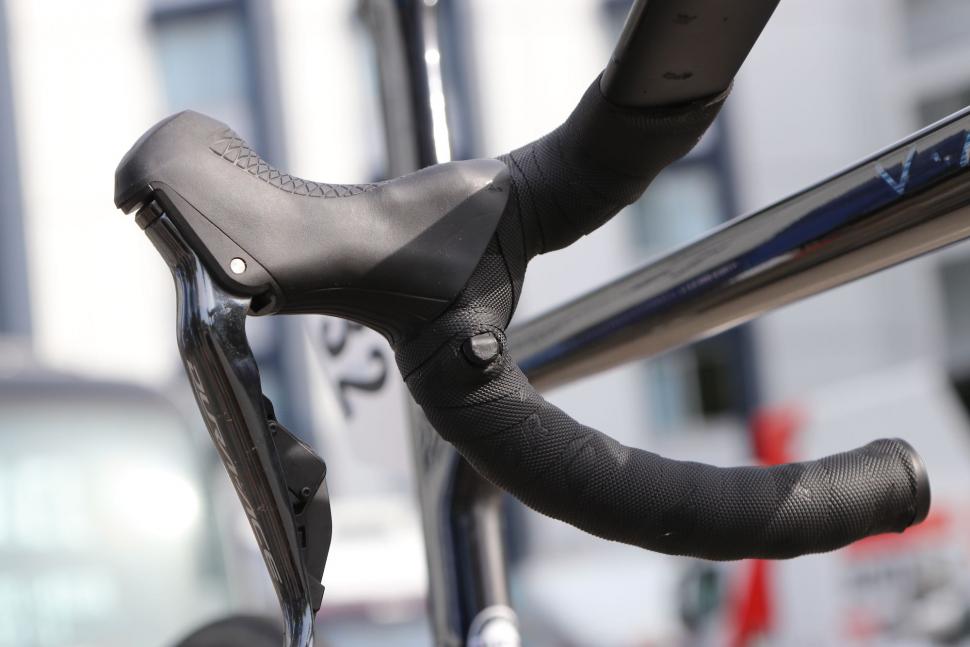 If a stage is set to end in a particularly fast sprint, or tail-crosswinds are predicted to blow, then the mechanics will be busy swapping out the standard outer ring for one with more teeth. With speeds on the flats approaching 70km/h (44mph) in places, the pros need these monster gears simply to keep up.

Whereas many of the bikes in the local shop will come with cheaper aluminium wheels, you won’t find stock alu wheelsets anywhere near a pro bike these days. Carbon is the only wheel material for the pros because carbon wheels can be lighter, more aerodynamic, and stiffer and that all adds up to being faster. 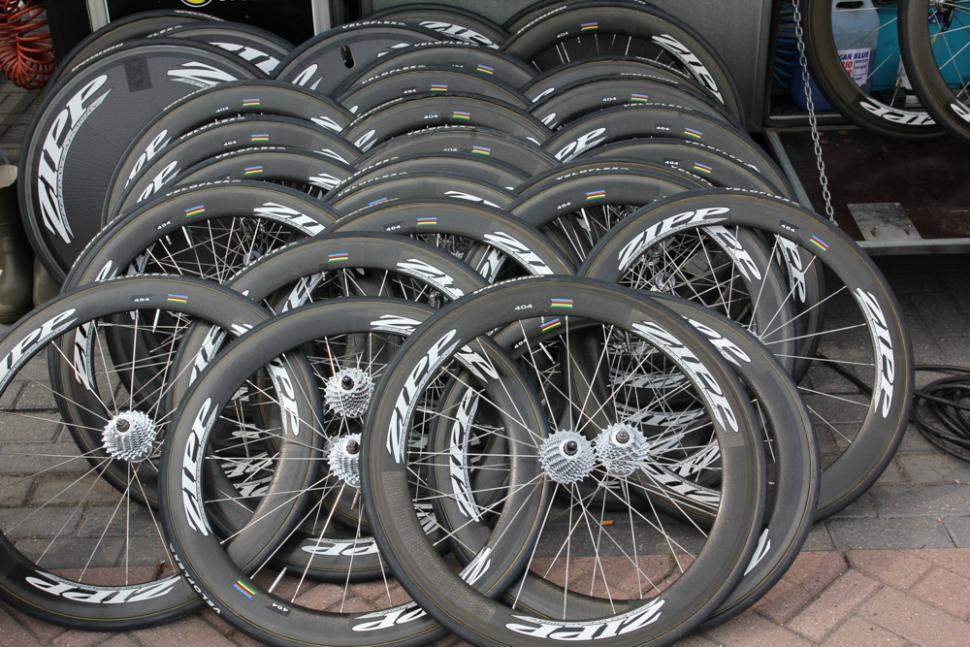 Poke your head into a pro team mechanic's truck and you’ll see countless wheels hanging from the walls. The riders have a variety of depths to pick from, and there has been a big shift towards tubeless tyres in recent years, although tubulars are still used – where the tyre is glued to the wheel rim.

Stock bikes don't come fitted with tubulars; they're specialist equipment designed for racing. It's easy to get hold of tubular tyres, but you'll need to fit the right wheels in order to use them. 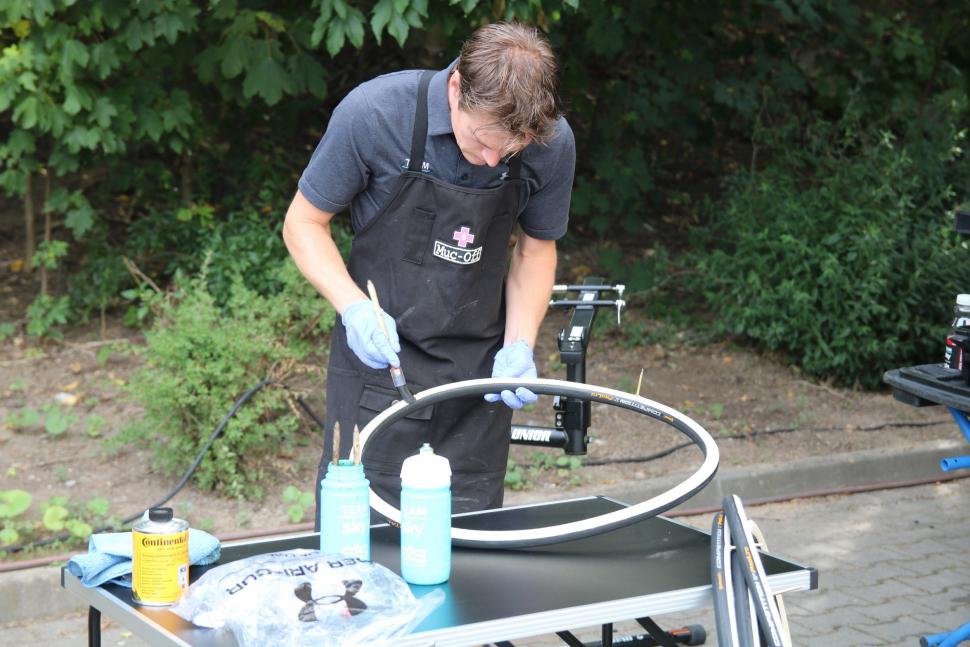 Tubular wheels need tubular tyres to be glued onto the rim. While some amateur riders still use tubs, far more go for clincher or tubeless tyres as the system becomes easier to set up and more reliable. As mentioned, the pros are increasingly moving towards tubeless but tubs are still hanging in there.

Why? The main reason for sticking with tubs is that if you puncture, you can keep on riding in relative safety until your team car comes up to you, giving you a shorter chase back onto the peloton. A clincher or tubeless tyre isn’t glued onto the rim and once deflated, there isn’t much holding it onto the rim. 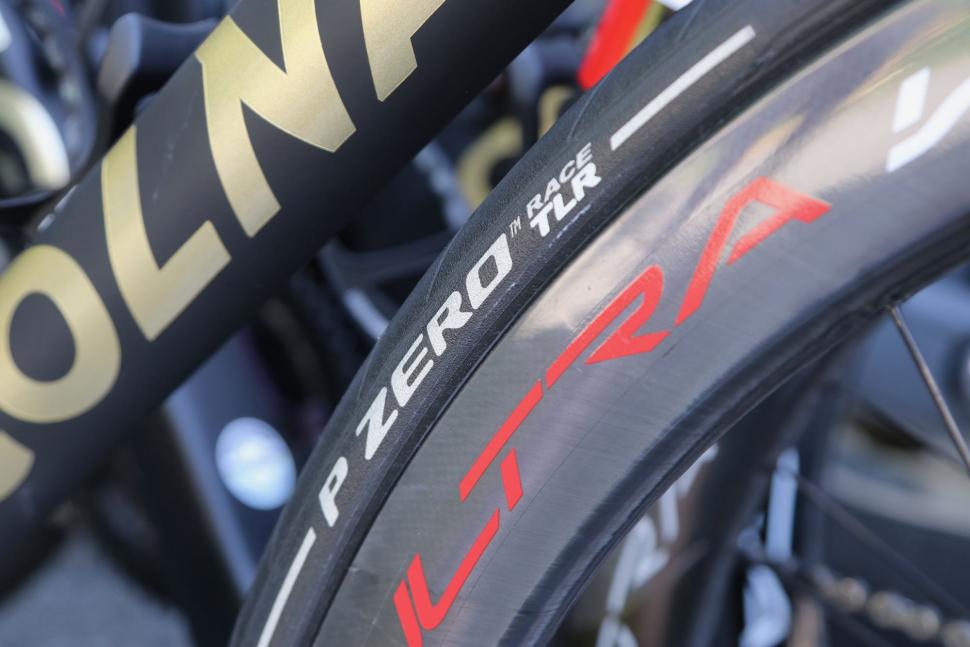 Generally, a tubular tyre and wheel system is also still lighter than the tubeless option.

On a bike that you see in a shop, you’ll always see clincher or tubeless tyres.

This isn’t strictly a difference between shop bikes and pro bikes, as you can set your bike up in any way that you choose, but the number of pro riders with long, low and narrow positions is greater than you’d see on the average club ride. 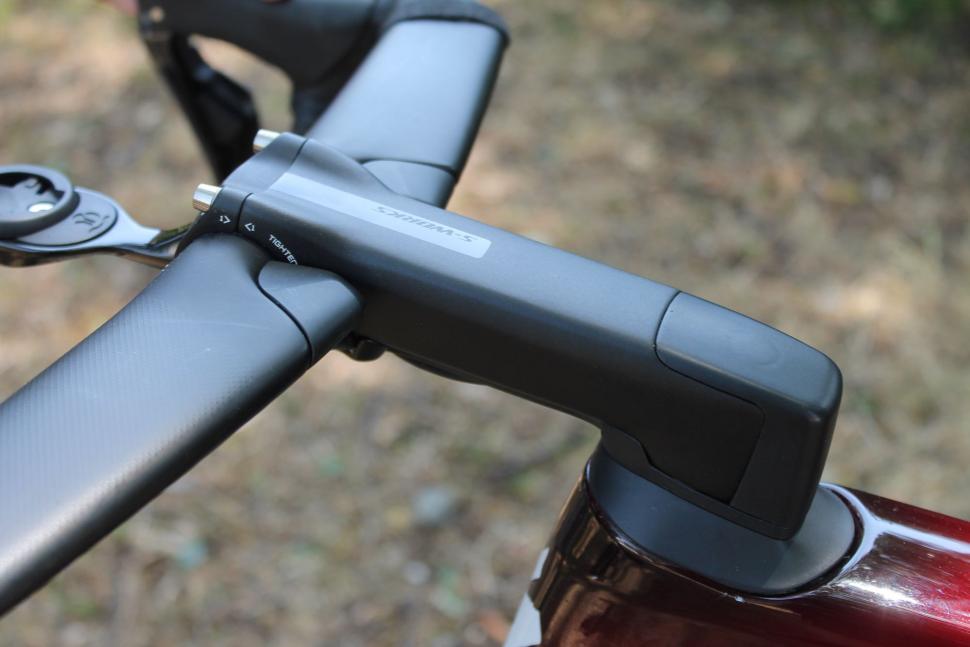 Pro riders are generally 20-somethings who spend 20+ hours per week in the saddle and also stretch every day. That keeps them comfortable in what can look like back-breaking positions.

The bikes in a shop will be set up differently for one key reason: comfort. Generally, they will feature a wider and higher handlebar position that is also closer to the saddle. This will often be more comfortable for the average human who is buying the bike.

A good shop will always adjust the position for you, so you can replicate those super-low racer positions if you want. Just be ready to see a chiropractor when your back goes!

Drilling down into the detail 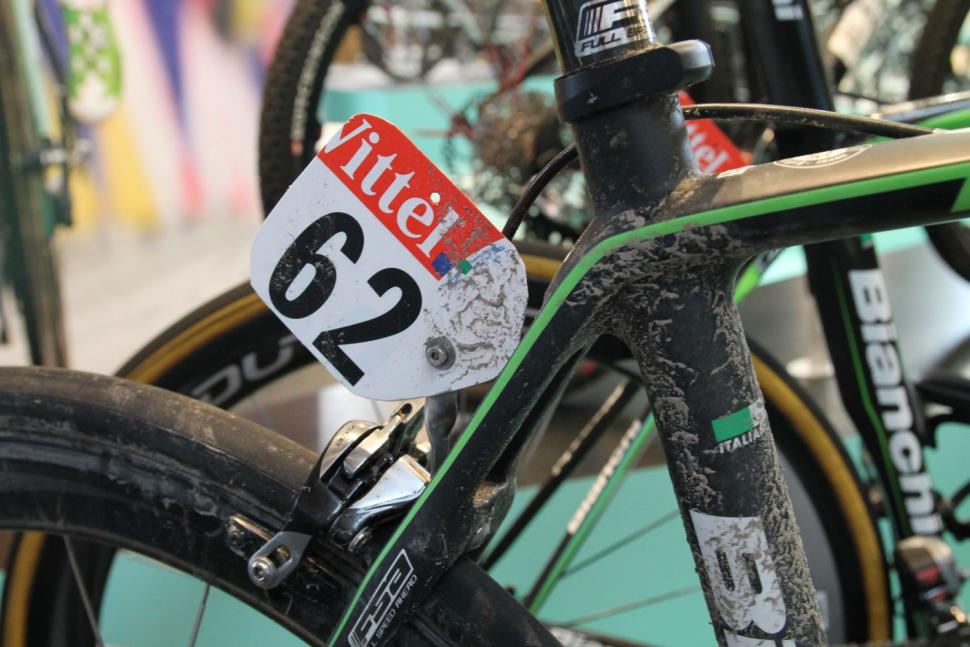 Pros' race bikes feature a mount to attach a race number. Honestly, this is less helpful to the viewers and race officials than it is to the mechanics. The rider's race number helps to identify whose bike is whose.

The number holders are never included with your shop-bought bike and are often a custom-made solution, though you can buy them. 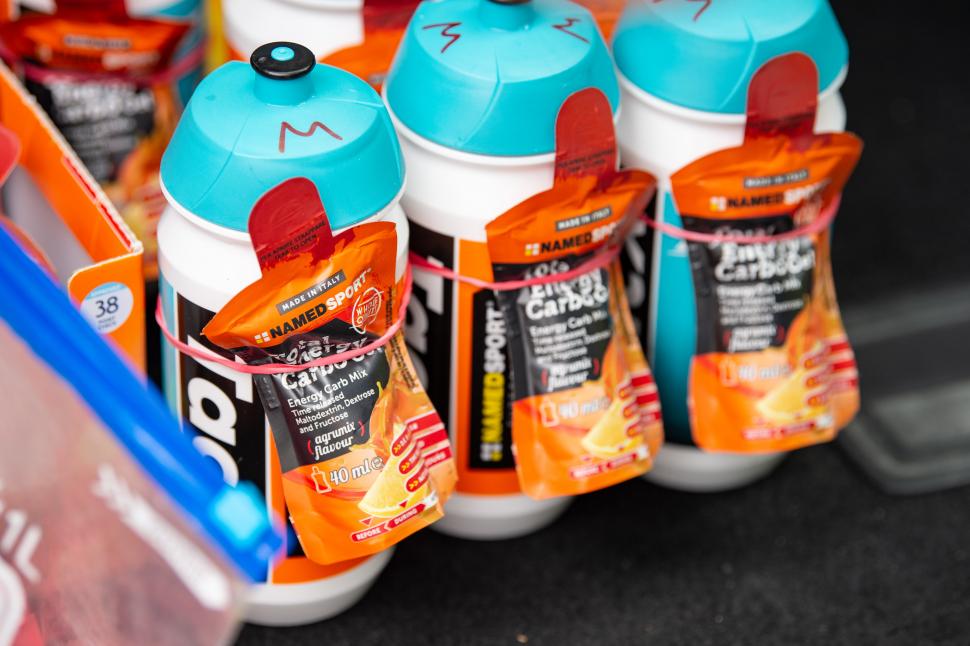 Before heading out, you and I won’t be taking a Sharpie to remind ourselves that we have Ribena in our bottles, but when a pro wants their specific energy drink over plain water, it is easier for the mechanic and sports director in the team car to identify what the bottle that they’ve just pulled from the cool box contains if it is marked with ‘M’ (mix) or ‘W’ (water). The letter or marking used changes from team to team.

Identical bikes on both team cars 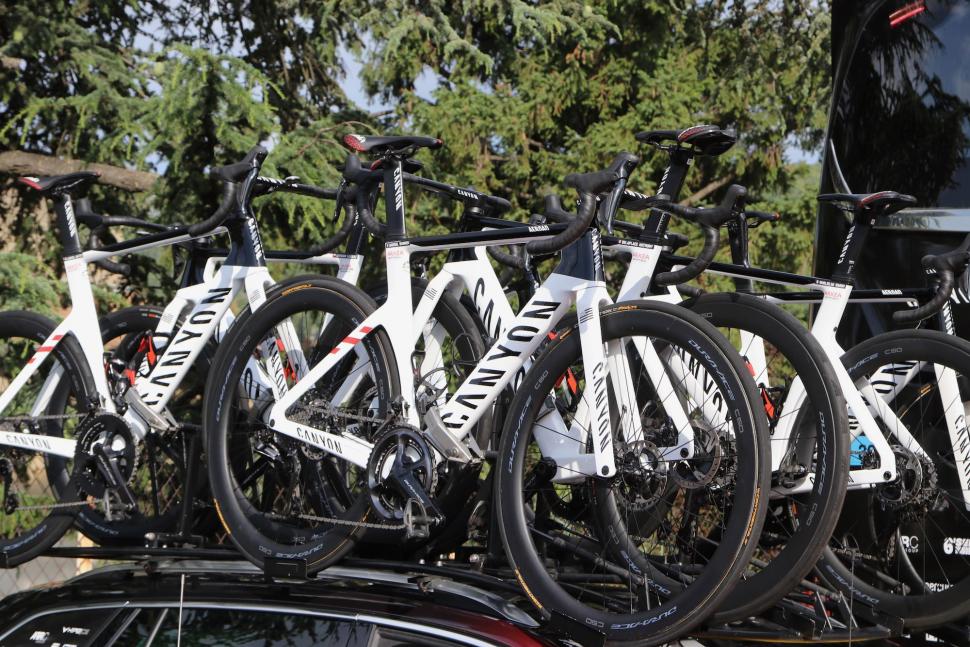 Just bought a lovely new bike from the shop? How about two more identical machines to follow you through France on the roofs of the two team cars following the race? You know, just in case your gears are a little off today or you have a mechanical issue.

Bike too light? Use aluminium parts

If you have deep pockets then the bike you buy from the shop can be lighter than a pro bike. The pros can’t go lower than 6.8kg – that's a UCI rule – and if a pro bike is a bit light riders will often opt for an aluminium handlebar or stem to bring the weight up. These are also less likely to snap when there is a pile-up... and there are lots of pile-ups in the Tour de France.

Speaking of pile-ups, when one occurs, GPS head units can often detach themselves from their mounts. Riders will use tape inside the computer’s mount, or a little strap to save their bike computer from going walkies.

The pro team mechanics will also put bar tape on the rider's pedals to stop any unwanted movement. Both are neat tricks that you can employ at home.

Does that part come with its own Sharpie?

Look closely, especially at saddles and tyres, and you’ll see a whole load of fun has been had with a Sharpie permanent marker. If a rider doesn’t like the sponsor’s saddle and they’re an important rider then they will sometimes just use their preferred perch and scribble out the logo.

Tyres are a massive culprit for this. Many teams will use Continental’s Pro Ltd tyres even when sponsored by another brand. The poor mechanics have a lot of Continental logos to colour in but an eagle-eyed bike onlooker can usually spot them pretty easily.

The bike that you buy in the shop will often come with a design that you love. Pro bikes often start with the same design, and then the sponsors of the jersey, groupset, wheels, power meter, brake pads and even the team owner’s family’s plumbing business get their logo on the bike. Some can end up looking a right mess, but not your shiny new bike... unless you too have a plumbing company.