Look at that poor bloke... 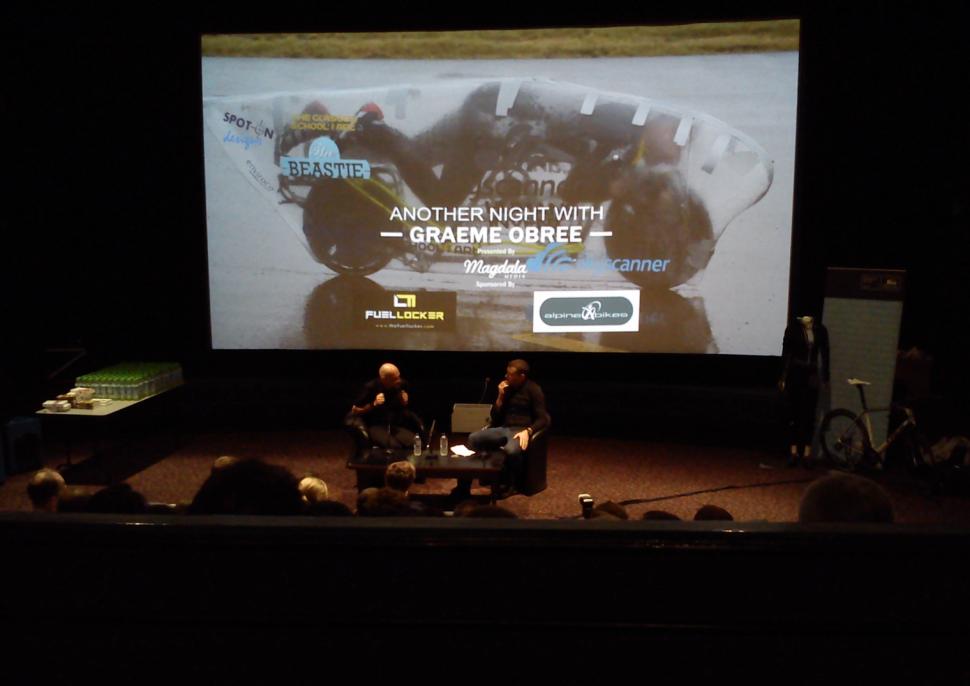 Look at that poor bloke...

...somebody's built a bike specially for him.

That was a comment Graeme Obree overheard when a spectator saw him riding his groundbreaking, and ultimately UCI illegal, Old Faithful.  That poor bloke and that special bike went on to take the hour record.

The Glasgow Film Theatre hosted an evening with Graeme Obree as he talked to journalist and writer Richard Moore, discussing his recent attempt at the HPV record and pretty much everything that preceded it.  I was lucky to attend and thank Magdala's Rowan Mackie for the opportunity.  The focus of the event was Graeme's need to win, his desire to challenge convention and his physical and mental approach to cycling.

Major change is something that hasn't happened to the diamond frame bicycle, you can look at one of the original “Safety Bicycles” and look at modern machines and the rider sits in the same position, the wheels are in similar places, the proportions are essentially the same.  Ok, so bicycles have moved on with composite frames, wheels and electronic shifting, but that's technological advance, it's the same basic componentry being produced in a more extravagant and precise manner.

This is where the likes of Mr.Obree come into the historical timeline, to create those blips where people re-evaluate what is deemed as “accepted”.  He has challenged convention, mainly to work around his own requirements, the original tuck position was not only to get his “extraordinarly long arms” (his words!) out of the wind, but also to get them into a position to allow him to support himself for an hour.  The famous narrowing of the bottom bracket and removal of top tube was to give greater efficiency in pedalling motion.  He explained (with a candid look at the audience) that Lance Armstrong experimented with a narrow Q-factor, but it didn't suit him.  For Graeme Obree, it was successful, it helped bring him the hour.

For someone with a well documented history of depression, the overriding experience of listening to Obree talk is his mental fortitude and his ability to inspire others.  He explains that it's taken him years to accept that people look at his career and draw inspiration, it was only seeing Nicole Cooke grit her teeth and power to Olympic gold in Beijing that finally opened his eyes to what other people had been telling him for decades.  As a listener, his focus to his sport is enchanting, hearing him talk about the hour record and how he explains: “I wasn't wanting to die, but I was willing to die”, is inspirational, I'm not sure why, it's not something that I can identify with in terms of my approach to anything in life (with the possible exception of mince pies), but it's great motivation.  That might mean getting on your bike and going training in the driving rain, or doing that one last interval before you collapse off the turbo in a sweaty mess, either way, it's easy to draw inspiration from his words.

The opportunity for Q&A allowed me to ask Obree a question, and naturally to me this was “what's your next invention going to be?”.  I'd seen him talk at Stirling University in 2012, on the run-up to the HPV attempt, and at that event he talked about his ideal commuter machine: how it would be faired; have “bucket pedals”; mudguards that reached the road; regenerative braking; enclosed drive chain.  This has captured my imagination as much as any of his previous machines.

Cycling is my main form of transport to work and I see other commuters driving their cars a few miles across town, only to arrive a minute or so ahead of me.  Sitting in a car that (sometimes) costs hundreds of pounds a month to run.  Obree's talk of a machine along the lines of a self-perpetuating E-bike will be the saviour of our congested island. Even if it's not done by him, I have faith that the new breed will be looked at in Obree-style fashion, it will change the accepted norms.

And that's what Obree does best, he asks the listeners to imagine that they are strangers in their surroundings, to evaluate each and every accepted “fact” and decide whether it can be changed, how it could be better, it's by doing this that gains are made.  I, for one, can't wait to see what Mr.Obree focusses his attention on next.