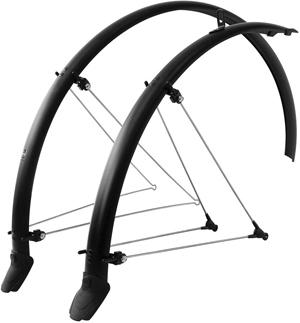 These are great mudguards until they break. And they always break.

The front one is fine. Unfortunately it is tainted by association with its partner, which can't handle the stress of its job and eventually cracks. How long it lasts might depend on how much money your council has to keep the roads in good repair.

My distaste for planned obsolescence aside, as documented here and in more detail here I actually like fixing mudguards. They're not too complicated. I can understand them. A broken guard gives me the opportunity to feel handy, which happens infrequently enough to approach the job with some enthusiasm. They aren't always salvageable, but it's fun to try.

Mudguard recycling is on Wednesdays

Not everybody cares for mudguards, even if they can fit them, tyre clearance increasingly being measured in microns. Some claim they are too ugly to be allowed on anything as beautiful as a bicycle. According to one authority, "They're just slowing you down by being there." But if, like me, you feel vulnerable to the universal solvent without them,

you're advised to keep looking.

Rating out of 10
5. Fair's fair, they keep you half dry. If you're prepared to bodge a fix you might rate them higher out of pride or prejudice.