It really was a Ball Buster this year

On the Mendips the mist from the night before had frozen on to one side of all the branches of the hedges and trees, blown and chilled by the incessant north easterly winds. A thin film of ice on every twig. The mists were long gone but the wind remained, keeping the temperature high up on the hills below freezing. At least we were travelling with it. Come Glastonbury, we'd have to turn round...

Barry's Bristol Ball Buster was my first 200km ride, three years ago. I enjoyed it then, and it got me into attempting longer distances; so far my personal best is a 356km romp across the country from Bath to Colchester. But yesterday was a horror show. A hovering-around-zero, icy-wind-in-your-face, can't-feel-your fingers, rule 5 kind of a day. And a whole day of it too. I've rarely been so cold, for so long. Some positives. There was cake, and plenty of if. It's my considered opinion that the Hill Women's Institute cake stop after 40km of the Ball Buster is the single best stop on any ride in the UK. It's astonishing. If you know of a better one, let me know so I can come and give it a go. Following on from that, the Doynton stop had almost as much cake and also lovely home-made pea and ham soup and tasty rolls. You couldn't say we weren't well fed. Plus the route is lovely, a mix of quiet lanes and B-roads with plenty of flat bits to batter along, interspersed with plenty of hills to test your mettle. I didn't spend much time admiring the view. From the off it was a day for getting on the drops and tucking in. The cold and the wind bit as soon as we crept out of Bristol, and across the levels of the Severn Estuary there's nowhere to hide except behind the man in front, as close as possible. A good group got us to Hill at 40km but after that it was me and wing man Jez, with him taking the lion's share of the time on the front as we headed east toward the second stop. The slog over Hawkesbury Common was particularly attritional, not least because it ended with the grind up to the Somerset Mounment, high on the ridge. I slumped down on the grit hopper at the top with such force that I broke the lid. Sorry, Highways Agency. 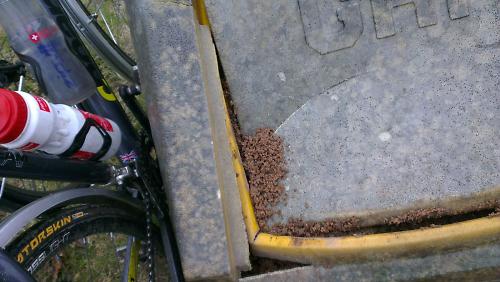 After Doynton the route's predominantly south, for a long way: 55km to Glastonbury's crystal shops and people in odd hats. And bits of it were enjoyable. Not the first bit though. From Doynton through to Bitton and Keynsham is a route home if I'm riding north of Bath. It was pretty psychologically damaging to have to ride those roads knowing that I wasn't going home for a nice hot bath, and more to the point that I wasn't even halfway round. I felt better when I got to the Mendips. I even got on okay with the climb from West Harptree, which is normally a dreadful and unrelenting slog. Mostly, I think, because I was warm at the top.

Not for long. It was really, really, really cold on top of the Mendips, 800ft up with very little protection against the biting wind. I'd have liked to show you a picture of those icy trees. But I wasn't about to stop, thanks. Normally riding up on top of the Mendips is one of my favourite places to be but I've never been more grateful of a descent, even one that chilled me to the bone like the drop into Wookey Hole did. The rest of the run down to Glastonbury was quiet and uneventful, save for the few brief turns to the north that gave us a taste of what was in store for the final leg.

Turning back towards home across the levels to Wedmore, there's no respite. It's pan flat, there's no cover, it's all north, into the artic headwind. That was pretty draining, but just when we were thinking it couldn't get much worse the route heads off the levels, first up Mudgely Hill which is a pretty hateful climb even on a good day, and then Lascot Hill to the windmill, where we were windmilling our arms to try and get some blood in our fingers. Thank goodness for the train that came past at that point, a couple of fit, chatty lads tapping out a nice steady pace with a bedraggled-looking grupetto behind them, taking a break from the incessant wind. We jumped on and briefly – for maybe 10km – it was a nice ride again, with company and someone else doing the hard work. One of them punctured, and we were on our own again, facing down the Siberian blasts and tackling the constant changes in gradient.

It was at this point that the wheels came off a bit. Well, a lot. The handful of kilometres to the final checkpoint at Kenn, 190km in, were a pathetic grovel, all tired legs and frozen fingers and uncontrollable nose emissions. The chatty lads came past, chatting, but we were in no fit state to hop on this time. They were there, and then they were gone, and we were on our own again. The bloke in the pub at Kenn asked us how far we'd ridden, and he looked at us as if we were stupid. And at that point, we felt pretty stupid.

After the last stop, when we were presented with the option of either following the route round the back of the M5 to Portbury and up two mile hill, or turning right and staying in the valley all the way back to Long Ashton, we wimped out. To be honest it's not even that much of a short cut – 3km maybe – but psychologically it was the boost we needed. And it was quite a lot flatter. I was too tired by this point to work hard enough to really get warm; I had mitts on, with winter gloves over the top, and Gore-Tex overmitts on top of that, and my hands were still cold. I couldn't hold the bars properly and I couldn't really change gear in the mitts either. Twice along the railway path I nearly ended up in a hedge because I found myself looking down at the bars rather than at where I was going. I was cooked. Or frozen. Both, if that's possible.

We made it back. It's miles in the bank, and one to talk about. It wasn't pretty. Thanks to all the LVIS volunteers for running a great event. Sorry we made a bit of a mess of it.