When is a climb too steep? When the pros have to walk

On yesterday’s sixth stage of the Tirreno-Adriatico, a 30% climb near the finish of a rain soaked stage produced the unthinkable: photos of professional cyclists dismounted and pushing their bikes.

The photos of the professional riders walking up the climb, dismounted and pushing their bikes, grinding their cleats into the Tarmac, has gone viral since the photos first hit the internet. It was the Strada Cocciari summit on the Sant'Elpidio a Mare climb that caused the damage, a 300m stretch with an 18% average gradient and 30% final 50m ramp.

While the front runners managed to ride the cruel slopes, many of those further back in the peloton clearly found it too much and dismount. These were the riders who had done a lot of work setting the pace and taking the wind earlier in the stage, and they were obviously pretty knackered by the time they hit the climb. And it did come at the end of a 200km stage... What made the climb especially hard is the slippery surface caused by heavy rainfall. Traction is easy to come by in the dry, even on such a steep slope. Following persistent rain ,however, traction becomes a scarce commodity and stopping the wheels from spinning while applying the necessary power would have been nearly impossible. This is the main reason so many riders resorted to walking.

It would seem that many of the riders didn’t anticipate the severity of the route's parcours and simply arrived in too big a gear. Chris Froome’s mechanics had reportedly made a change to the gearing of his Pinarello, fitting a 36x28 lowest gear. Even that was too hard, he’s quoted as saying. 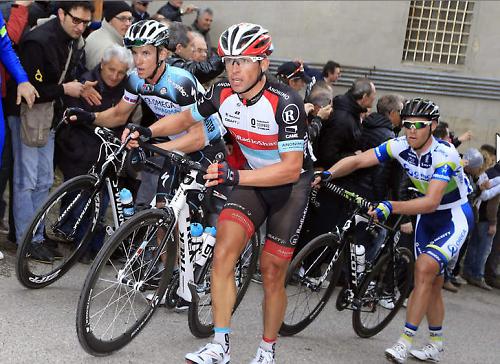 Next time we’re at the point of considering dismounting, we can all take comfort in the fact that even the best sometimes have to walk

Below, thanks to Google's Streetview, you can see just how steep it really is.