The Bicycle Academy: day one 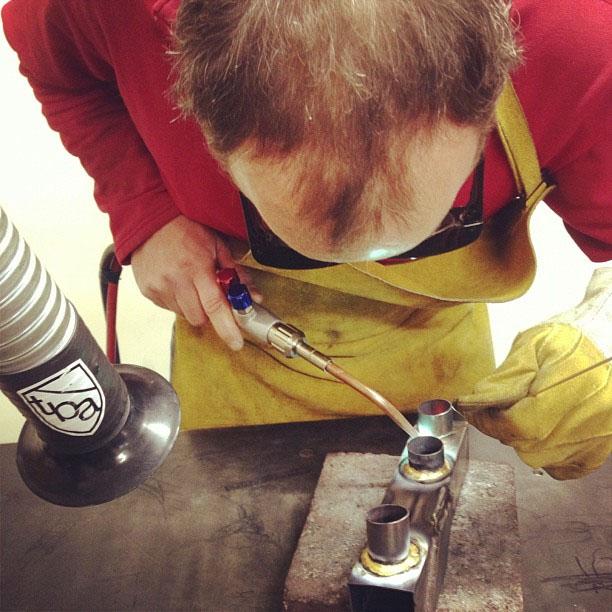 TBA day 1 - brazing overhead
Brazing basics and some messing about with mitres... I rememberd not to touch the hot bits

Day one of four at The Bicycle Academy and a step into the unknown. Well, half unknown anyway: walk through the doors into the tidy and well-appointed workshop and if you're new to this frame building lark like me you'll see a mix of the reassuring – metal files, saws, vices, spanners – and the downright terrifying: Oxyacetylene torches, gas flux canisters, extraction units… this is all well beyond the realms of my fabrication experience which mostly revolves around a Dremel Multi and a big tube of Araldite. 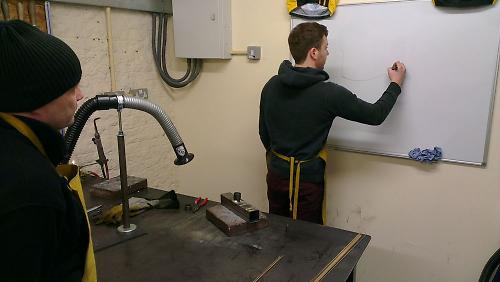 Anyway, down to business. Andrew's in charge and he soon puts me and my fellow student Tomasz at ease with some nice clear guidelines on safety – don't touch the hot things or point the very hot thing at anyone – before delving straight into the fillet brazing. Andrew's taken over teaching from legendary frame builder Brian Curtis, who's currently recovering from being unwell. Andrew's upfront about how many bikes he's built – precisely one – but Brian's clearly taught him well, and he's a natural teacher himself. We watch as he draws a perfect line in brass across the box section test piece. Keep the cone of the flame close to the fillet, let the pool of molten brass melt the rod, dab and move. And then it's our go. 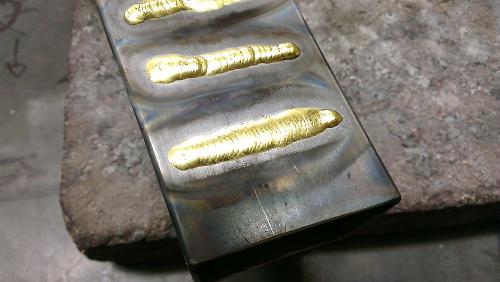 It's fascinating and unusual to try something entirely new. With just a few basic commands – forward, back, up, down, rod – Andrew has us scribing brass across the steel surface. The movements and adjustments are minute, and it seems to be a mix of precision and rhythm and the ability to see what the molten braze is doing at any one time, and anticipating what it's going to do next. From the flat work we move onto brazing a cylinder of steel onto the surface, and now there's more variables. One bit of metal heats up more quickly than the other; there's adjustments to be made to the position of the flame, and constant adjustment of the flame position to track around the joint in the components.

Last brazing practice of the day is the real thing, sort of: two mitred tubes. We're building bikes to take huge loads on African dirt roads so the material is mild steel with a 1.6mm wall thickness. This isn't posh tubing, and thank goodness: Andrew shows us just how delicate a high-quality tubeset is by training the torch on a scrap section of Columbus steel with walls just half a millimetre or so thick. It doesn't take long to burn a hole straight through.

Brazing two mitred tubes introduces even more things to think about. As well as the difference in heat capacity between the two tubes, there's a constantly differing relationship between them: flat at the edges of the mitre and a deep valley where the centrelines of the tubes meet. A strong fillet needs more material where the flats are; too little, and too much heat, and the brass will speed too thin. With plenty of direction from Andrew we work our way round. Rod. Rod. ROD. When Andrew's happy that we can make a strong join between two tubes – he shows us stress tested samples where the tubes have completely deformed but the brazing remains intact – it's time to put the torches down and Chris talks us through the business of preparing the tubes for the main triangle of the frame. Because the bike is a set design there's handy cutting guides for the various mitres between the members but even so, it's very much a trial and error process to get the tubes fitting snugly together, and even when they do we'll have to revisit them once the frame is put together in the jig. It's amazing how much tiny misalignments can affect the frame; if your bottom bracket shell is at 91° and not 90° you won't need the clever digital angle thing. It doesn't look right. I got to 90.1° and shaved off a few more strokes with the file: 89.9°. I tried giving it a tap to 'settle' but it stayed resolutely just under…

Last jobs of the day were trying to remember from metalwork lessons 30-something years ago how to use a Vernier calliper (I failed) to mark the positions of tubes on the head tube and bottom bracket, and then a bit of judicious filing to get the laser-cut and very sturdy dropouts ready. And suddenly it's half past five and the whole day's gone. I'm looking forward to the next three...