What an experience! Tour of Britain Stage 3 blog. Endura-TOB
What an experience! Tour of Britain Stage 3 blog.

Tuesday 11th September, Tour of Britain stage 3 from Jedburgh to Dumfries, 152.6km of pain and suffering for some. Not so for me, I was sitting pretty as a VIP guest of Chain Reaction Cycles at the finish line in Dumfries enjoying the hospitality and conversation with Simon from CRC as we chatted about cycling.

It started a couple of weeks ago when I entered a Facebook competition, I thought nothing of it until I got a call asking if I'd like to be the guest of CRC at the finish in Dumfries, it wasn't a hard decision to say “Yes”!

My day started out in Jedburgh where I was dropping a mate at the start line (he won a different competition to ride in a Specialized service car).  The good folk of Jedburgh had put in a huge amount of effort getting the town prepared for the depart – shop windows bulged with cycling displays with everything from and old Colnago to a kid's Scoot bike providing the Tour of Britain buzz.

We had a walk round the paddock and saw a few familiar faces, the Sky bus was mobbed but I managed to hang around the UK Youth set-up to get a picture with Magnus Backstedt, a Paris-Roubaix winner – I couldn't believe it!  Unfortunately I'm looking a total loon in the picture, but hey, I've met a total hero! A slightly geekier photo op came in the form of Ned Boulting, he was generous enough to have his pic taken with me and a friend, wishing us the best for the day ahead.  I must say that a shirt, v-neck jumper and jeans is a classic combo... Ned's got style!

Finally, John Herety and Kristian House were spotted deep in discussion, probably planning where to form the break so that House could take back the King of the Mountains jersey. I arrived at the VIP area, grabbed a bit to eat and a drink then settled down for a chat with Simon from CRC.  It was great as we not only shared the common interest in cycling but also motorbikes, the hours sat watching the big screens went quickly (too quickly!) and soon the breakaway riders were flying past the finish, then the peloton hammered through, looking intent on making the catch.  And catch them they did, we saw the final few km's on screen then turned our attention to the finish line and watched Cav take it in emphatic fashion.  What a sprint!

Simon had asked me to present the points jersey on behalf of CRC so of course I agreed, I donned their replica jersey and waited to present it to the previous day's leader, Boy Van Poppel.  As we were waiting, Mark Cavendish and Kristian House were milling around a few metres away – starstruck is not the word!

Finally up to the podium I went, it was somewhat overwhelming, I didn't really know where to look or what to do but the podium girl was the old hand and directed me professionally.  I had a few pictures taken and gave Boy a celebratory bouquet then it was back off the podium and the riders all disappeared, no doubt keen to get back to the bus then to their hotels for warmth/a meal/massage etc. 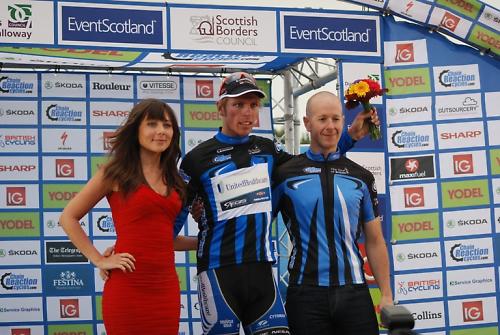 We had a quick trip round the TV production van, seeing the inner-workings of how the ITV highlights show is put together then it was time to say goodbye to Simon and head home.  It was a whirlwind of a day but an unforgettable experience – thanks again to my hosts!  It's really given me incentive to work hard next season and get my 3rd Cat license... who knows, if I work hard enough, I could be doing it one day.... (enter dreamworld!)