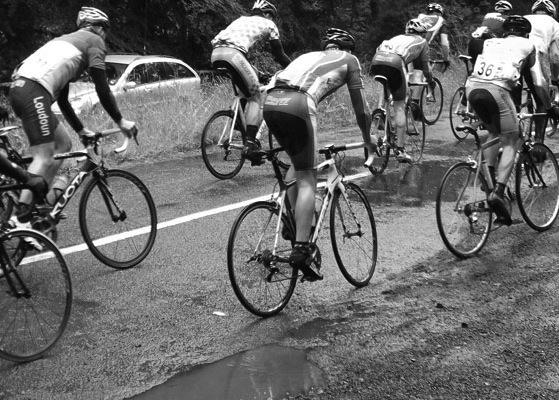 Switchback2 - © Sandy Auston
Sam manages to finish a race near the front.

I very nearly did it!

When I got the confirmation that I’d been accepted into ERC’s Lothian Flyer road race, I started thinking about reasons not to do it.  I’ve been going like a bag of crap in recent weeks and not been feeling great on the bike so my confidence going into the race was fairly low.  I wasn’t looking forward to it.

Saturday morning I woke and my nose was bunged up – yep, it felt like I was getting the cold that my kids and wife have been pedaling for the last week or so.  The rain was lashing the windows so I accepted that I was going to get a soaking and that I’d probably be tucked up in bed with man ‘flu on Sunday so I might as well get on with it and go race.

I’d arranged to drive down with my mate Owen so I picked him up at 8am (the race started at 11am) so that we could get there early and scope out the course – good job we did, it had a couple of big potholes, some nasty corners and farming muck spread along it’s 7 miles.  We made mental notes of these and headed back to the start to get ready and try to warm up before the start of the race.

The briefing picked up on the condition of the course and soon enough we’d set off on a neutralised start, I was expecting a massive surge as the flag went down but thankfully the pace stayed sensible for the first climb up Dreva hill but the field strung right out on the single track road descent.  At the end of the descent there was a left turn, I got caught up on the inside of the road and stood up on the pedals to get back onto the leading guys… my rear wheel lost traction and aquaplaned sideways, Dukes of Hazard sideways.  A guy behind me touched my wheel and went down, I shouted  ‘sorry!’ and continued my chase, feeling bad that I’d put an end to someone’s race.  The same happened on the next 5 laps but I stayed seated and tried to keep some weight on my rear wheel.  Further down the road on lap one there were two guys on the floor looking like they’d just been chucked off the back of a truck, I was still on the inside and picked the 1 foot gap between them, just managing to get through.

The switchback at the start of Dreva hill

Sticking with the bunch.

The next 5 laps went fairly well, the conditions were horrendous, I could hardly see through my glasses, I took them off then immediately put them back on.  Looking through the bottom of watery jam jars was much better than trying to race whilst staring point blank into a garden hose.  Fortunately the pace stayed sensible up the climbs, either that or I’m climbing better, and I stuck with the remainder of the 60 starters to come off the climb on the final lap in a good position.  This soon changed and I ended up on the outside of the pack trying to get a bit further up as I was sure the pace would increase as we climbed Dreva to the uphill finish.  It was a bad choice and I smashed into a pothole on the right hand side of the road.  The bike felt ok though and I carried on where I was, ending up well positioned in the top 10 at the start of the climb.  As the pace increased I felt as though I was working much harder than I had on previous ascents – the pace wasn’t that high and I felt as though I should be keeping up with them but I was going backwards… fast.

As I shot out of the bunch, my heart rate was up at 175bpm and I was puffing badly, but there was another sound, a shink-shink-shink-shink coming from my front wheel, I had no idea what it was and blearily looked down to see my front brake pad was rubbing badly on the rim, I’d been riding with the brake on!  I knew there were still bodies behind me so I tried to release the tension on the brake cam, this made things worse, I tried again and pulled on the cable to release the sticky cam, affected by the worst of Scotland’s winter salty roads (this is my winter bike remember!).  Pedaling suddenly got a lot easier and I tried to get back onto the group but by this time I’d blown, my legs were jelly and I just tried to power on as best I could. 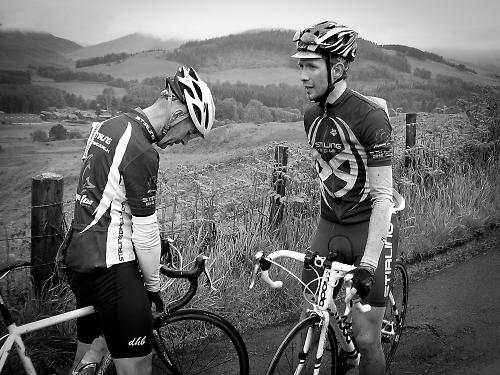 Owen and I at the finish - me explaining the binding brake problem.

The finish line came in sight… I knew there were still guys behind me… one came past… the line was getting closer… I was going to make it… another one came past!  I’d finished 56 seconds down on the winner, the main bunch finishing about 12 seconds behind him.  I’d done it!  In my mind immediately a success, I’d managed to finish just behind the winning group and not been unceremoniously pumped out of the back on the 2nd lap as in previous races.  I immediately felt annoyed that a mechanical problem had held me up, but for the moment, just getting a good finish is enough for me.  I was awarded 24th place out of 60 starters, the conditions had claimed 16 victims so I finished about halfway down the field.  My mate Owen had done much better though and got a top 10 finish – a fantastic result.

Before today, I’d worried about whether racing was really for me, but having done a race where I’ve been going well and stuck with the bunch, I can honestly say I enjoyed it.  The feeling of getting round with the leading guys is a LOT better than getting shelled and losing the will to live on the way back to the car.  Next on the cards is start looking for more races to enter as I’ve not got much lined up at the moment!

(I also need to replace one extremely worn brake pad on my front brake, the pic below shows the worn one on the left hand side – galling as I’d only installed them the night before the race!!!) 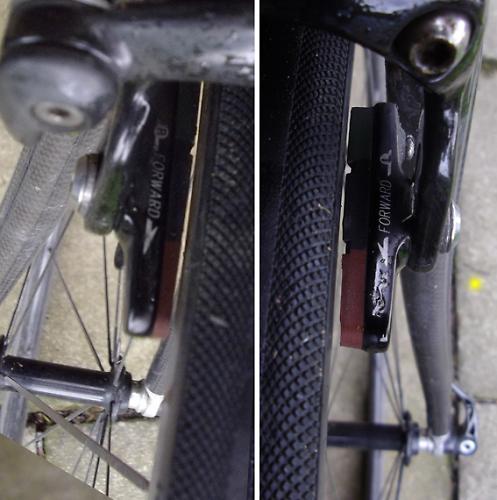