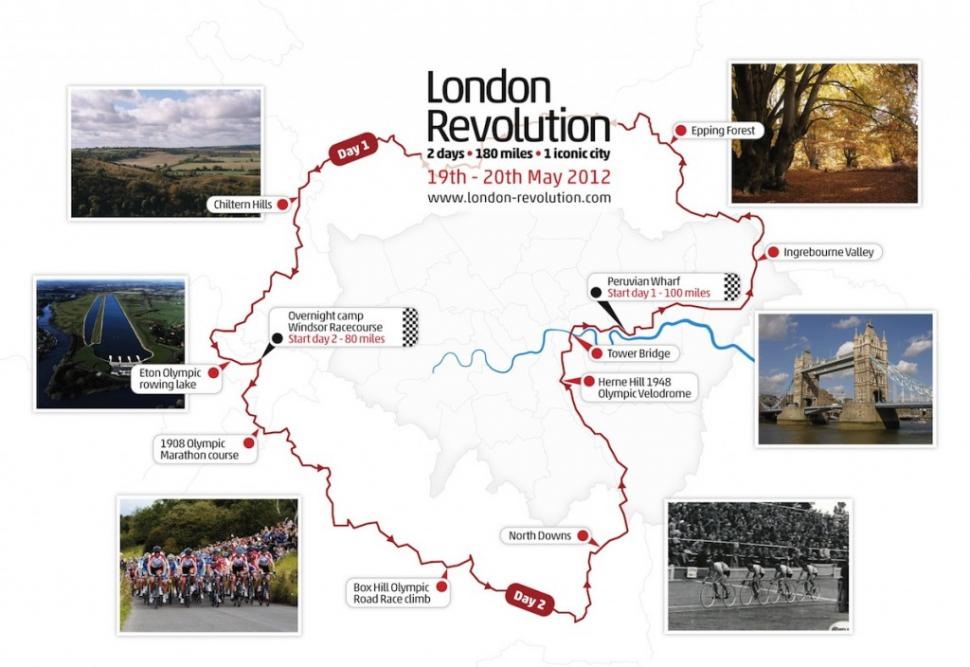 Route-Map-1024x704
On May 19th I turned up at 7am at Peruvian Wharf, terrified, with no frame of reference whatsoever for what I was about to do/fail to do. The furthest training ride I had done so far was 55 miles so doing 100 miles one day, camping and then doing another

Has it really already been more than 2 weeks since I became a Revolutionary?

On May 19th I turned up at 7am at Peruvian Wharf, terrified, with no frame of reference whatsoever for what I was about to do/fail to do. The furthest training ride I had done so far  was 55 miles so doing 100 miles one day, camping and then doing another 85 the next seemed like rather a big ask. I was also incredibly interested to see how Threshold organised such an event as obviously I will be doing 9 days with them in September (Deloitte RAB 2012 - in case I let any of you forget!) so it was good to get a taster of what was to come, how it all worked, did it work for me??

I was greeted with huge smiles and good luck wishes by the organising team, given my rider number and colour coding for luggage and tent purposes. There was food and of course drinking water stations to fill up.  Bikeworks (an excellent organisation that gives people from disadvantaged backgrounds the opportunity to gain skills and employment in the cycling industry) were also there to help you with any last minute maintenance.  So, lycra-ed up and ready to roll, I met up with a few fellow Deloitte RABers and joined the queue to start.  Cycle training guru Andy Cook was there to brief each group as they left and it was great to see Threshold co-founders Julian Mack and James Cracknell there cheering us on our way.  They were both gamely and supportively joining us on the ride later (and still managing to finish before most of us) James with a broken metatarsal from running the London Marathon - is there no stopping that man?

The day began slightly frantically on the A13, but it soon opened out onto beautiful peaceful countryside and we wended our way north and then west on our great revolution of London.  We were to take in the Chilterns, Epping Forest and the North Downs, ride Olympic courses such as Herne Hill Velodrome and Box Hill and ride past iconic landmarks such as the Millennium Dome and Tower Bridge.  Everyone spread out taking their own pace and before we knew it we were at the first pitstop.   Refuelled with a mix of scrummy flapjacks, bananas and all the SiS energy loading products you could possible ingest, we were off like rockets on the next leg!

Despite there being around 1400 people on each days ride, I managed to spend much of the first day cycling on my own.  I really thought this would be a psychological downer for me but in reality I enjoyed the peace interspersed with little chats as people passed or (not so often) I passed others.  I am in the camp who prefers not to know the route:  I would rather not know that at mile 175 I will have to cycle up a vertical slope which may finish me off, I would much rather just arrive at the bottom and just get on with it having not dreaded it for the previous 174 miles. This, unfortunately, results in me not having a clue where I am going.....luckily the route was incredibly well signposted and I didn't have to worry about a thing.

Much more countryside and villages and beautiful scenery but another of the highlights of the afternoon were packets of pre-buttered Soreen malt loaf at the pitstop!  Although I had a couple of moments of pain or tiredness, after a munch on some brownie or energy bar they didn't last long and just as I was beginning to flag a little, Windsor race course appeared and we rode in to cheering friends and organisers.  Wow, I made it!  And still in one piece!

Fairly exhausted, I hung my bike in the green racks, picked up my bag from the green truck, collected my airbed and stumbled slightly Bridget Jones like to my little green tent in the rows of little green tents which had already been pitched by the team.  Next stop stretches, hot shower, massage (yes really) and then a huge delicious supper followed by drinks in the bar while watching the football or a showing of 'Cool Runnings' on the big screen outside.  Brilliantly (very importantly for me) all while your mobile phone charges on the specially erected charging points, Threshold really had thought of everything!  Unsurprisingly, I didn't last much past 10 before I crawled in to my sleeping bag and crashed out.

I slept reasonably well, despite having a snorer next door and a couple of guys who thought it was ok to be chatting loudly on their mobiles after 11....er no thank you.  Ear plugs are a must when you are sleeping 2 or 3 feet from quite a few exhausted and well fed riders.  I am told by a fellow (surfing) RABer, that blu tack is the best..... it apparently moulds perfectly to your ear and you can't hear a thing - I probably need to write one of those 'at your own risk' clauses here....

After a huge breakfast and having packed up, filled up my water etc, I joined some friends of mine, 3 guys known affectionately as 'The Dream Team' to ride the next 85 miles.  Today included Box Hill and quite a few were slightly wary of that part of the route but,  having been resurfaced for the upcoming Olympics, it was smooth and steady and as we sat smugly at the top, munching on our sausage rolls, thinking the worst was over, we couldn't have been more wrong.   During the last 30 miles of sporadic but really quite steep hills, I was incredibly thankful that I was not on my own.  'The Dream Team' military formation and rotation system of everyone 5 mins at the front allowed for a bit of free-wheeling recovery in between hills and obviously a huge amount of encouragement and back patting as we finally made our way out of the beautiful countryside and back in to London.  A lap of the Herne Hill Velodrome was also a highlight.  An extremely strange sensation as you cycle across a steep slope where visually it looks as though the ground on the inside of the track might drop away from you at anytime whilst it feels physically like you are riding on the flat; truly bizarre for a first timer but an amazing experience.

The last few miles were an interesting tussle with the traffic but the ride over Tower Bridge was worth it and after just a few more miles we arrived back at Peruvian Wharf to much applause, excitement and goody bags!  Wow!  To be honest, I was in shock; I simply couldn't believe I'd managed to complete it.  185 miles?  Just goes to show what you are physically capable of when you put your mind to it or perhaps more accurately in my case, dont think too much about it!  It also helps enormously to be so well supported and on occasion distracted (usually by the sticky cleated antics of the aforementioned 'Dream Team'!  Threshold's motto (I may have mentioned before) is 'More is in you' and for the first time I am beginning to believe it.  Psychologically, the London Revolution was a huge step forward for me, it showed how much further I was capable of going than I thought and that I could get up and ride 2 long days in a row (now I just have to get that up to 9).

Huge thanks go to Threshold Sports and Andy  Cook Cycling -  the team are wonderfully encouraging and supportive, always have smiles on their faces and the event was so well organised it was an altogether awesome weekend.  The inconceivable has happened firstly I have become a Revolutionary and I have the wristband to prove it!   Secondly, I am now actually far less terrified of the RAB and I may even be beginning to look forward to joining them in September!  London Revolution 2013 is now up for grabs so get in there and if you are feeling really psyched up, there are just 30 places left on the 2012 Deloitte Ride Across Britain.....Come on, you know you want to!