That was the noise I found myself making about three quarters of the way up Gold Hill. Coincidentally it was also the noise that Oli was making twelve hours previously after a quiet one ended up being not so quiet. Far from ideal preparation for a sprint hillclimb.

Gold Hill, in Shaftesbury. You know, off of the Hovis ad. There's a reason he's pushing that delivery bike, it's a steep old thing is Gold Hill. Fifty yards of tarmac before the cobbles start and then it ramps up to about one in six and pretty much stays there all the way to the top, save for the passage up to the high street where it's a little bit steeper. It's a timed hill climb up a cobbled street in a town in the South West, so it's hard not to draw comparisons to Frome's Cobble Wobble. With the might of the Red Bull Marketing machine backing it up, electronic timing and some big name riders, the Cobble Wobble feels a lot slicker. But the Bread Winner is much more a grass-roots competitive event, and that's evident in the abundance of local riders and the paucity of fancy dress; save for the guy in the full-face helmet and the all-over blue bodysuit, everyone who came pretty much came to race. There were no bells and whistles, just stopwatches for timing and lots of cheering from a decent crowd drawn by the sunny day. Bring it on.

My weapon of choice was the excellent Vitus Vee-1, geared right down to 45" and with the seat dropped so I had to stand all the way up. With about 30psi in the tyres I wasn't going to have lack of traction as an excuse either. Of the 90 or so entrants on the day, our personal race was between four: me, Oli (on his KHS singlespeed), Jez (a fixed gear Merckx) and Rich (ancient Stumpy FSR with the seat tube welded back on). 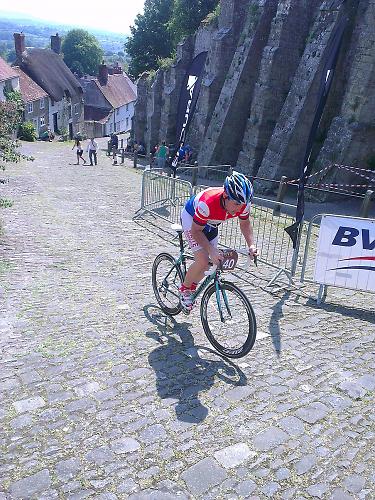 We were in the minority; mostly it was road bikes and lycra, and sacrificing comfort and a bit of grip for light weight and good power transfer. Some properly fit-looking lads blasted away from the start on top-end Carbon, we weren't going to beat them. Settle the nerves and concentrate on the task at hand: besting your mates.

30 seconds and the start marshall takes my weight. 20 and I'm breathing deeply, and fast, trying to cram a bit of extra oxygen into my system. 10 and I'm focused, feet in position, taking the strain with the brakes on. Five. Four. Three. Two. One. Go.

All my strength goes into the first few pedal strokes to get the bike going. My plan was to take it easy on the tarmac and attack the cobbles but all that's forgotten about five metres from the line. The gear is easy to spin on the shallow first section but as soon as the tarmac ends and the gradient ramps up I know I'll be hanging on come the end. I've already seen Jez go up and he looked fast, so it's eyes down and go for the burn. Halfway up the crowds start and I can hear the cheering but in a kind of distant way, like they're cheering from behind glass. My head's thumping, the gradient unrelenting. Through a narrow passage at the top it steepens even more, and it's everything I've got to wrestle the bike up to the line. Then it's flat, and there's colour and sound again, and I sit hunched over my bike for five minutes feeling like I'm going to expire. You always wonder if you could have given more. When I still couldn't walk properly on my jelly legs ten minutes later, I had to admit: that was as fast as I was ever going to go on the day. 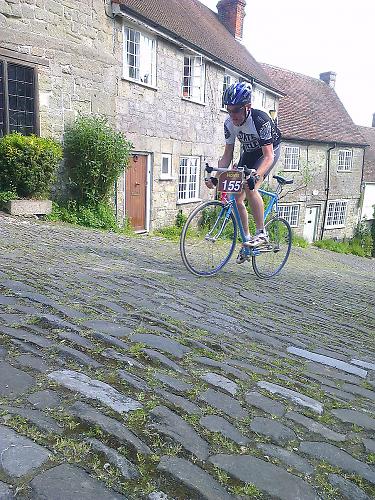 All this for 37 seconds. 37.31 seconds, in fact. 1.29 seconds too many in the final shakedown, Jez posted a 36.02 which was good enough to earn him a second run in the baker's dozen showdown and the fastest fixed prize for the second year in a row. Rich was 0.31 seconds behind me, a cracking run on a bike that's hardly the most appropriate weapon. The winning time? 26.93 seconds. By a big lad on a £400 Chinese frame from ebay. It's not just about the bike.

And Oli? well, the much-too-big 59" gear and the hungover legs conspired to grind him to a halt about half way up, whereupon he threw his bike across the cobbles in with Wiggins-esque petulance before remounting it to ride back down the hill and right out of Shaftesbury. We didn't see him for another half hour, by which time he'd calmed down enough to tell us that when he'd chucked his KHS a lady spectator had remarked, "well it's not the bike's fault..."