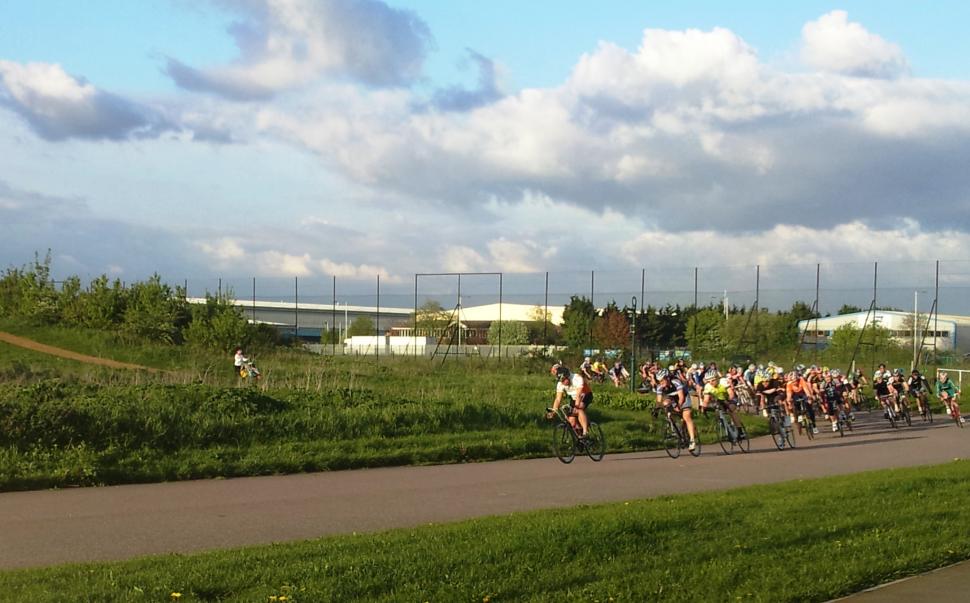 Call me old fashioned but I for one like to think that those who absorb the cycling press actually have some kind of respect for the writers. Equally, as a contributor, I like to think that by the time you are invited to write for a publication, such as this one, that you have reached some level of note as a rider or member of the cycling community.

If that is the case then I am a fraud.

Last night 50 minutes around Hillingdon has, once again, proven that I do not fit the bill and that in fact I do not know anything about racing bicycles. I am sorry.

In the eyes of British cycling an Elite Mountain Biker, such as myself, should in fact be comparable to a 1st cat. on the road. That is simply not my case. I am in fact a 4th category road rider despite my best efforts to get rid of that tarnish on my cycling CV.
Thus, given that I obviously know nothing about how to race a road bike you should probably just stop reading this article now. It will save you some time to focus on the words of Mat Brett or Liam Glen – they can actually ride bikes, I have seen them do it too.

Hillingdon, if not the nicest part of London is certainly a name that is now synonymous with cycling. I finally got round to going down and checking what all the fuss was about. As someone who has done more bike races, off-road, than I can remember I am not usually nervous or confused by them. I was last night.

The point at which during sign on when I was handed number 82 in the fourths I realised that this was much much bigger than I was expecting. I was thinking more like 20-30. I quickly grabbed my bike and got out to spin round. 300 metres in to my “warm-up” the course was closed ready to start the race. A mess of riders started gathering and I had no idea what was going on or where I needed to be. Eventually I worked out that E123 was at the front and the 4ths were at the back. Carrot and stick.

At this point I was expecting everyone to be rushing off to the bushes to pee, like in every other race I have ever been to. That didn’t seem to happen and despite being unsure if I could sit on a saddle I needed to go so bad I decided to tough it out rather than be the only one. Is it Hillingdon etiquette or was I just being silly?

On the line and I still didn’t know how long the lap was or indeed how long the race was. Schoolboy. Thankfully someone recognises me from the crowd of riders and kindly explained it all. Off we role, for 45mins and a couple of laps, and to my surprise this motley bunch of riders on expensive bikes are actually putting in the hurt on the front. Lack of warm up considered my heart rate was up in the 180s for the first couple of laps as I got to towards the front to keep my collar bones intact.

Things settled down. It felt fast and it was certainly faster than I could have done alone but blistering or organised it was not. Riding in 5th or so wheel I could control my HR to around 160 and I only really went up towards the top when I decided to chase someone down.

Attacks were plentiful but short. It seemed nobody had the legs to dig for more than about 40 seconds before dangling for a while until the inevitable swallow. After about 20minutes it became obvious that this was going to be a bunch sprint. Having helped push the pace and chase some strays down I decided to just sit back in the pack. That didn’t last long. In the mêlée of riders round the tight corners of Hillingdon was not somewhere where I wanted to be. I headed back up to the front to stay in the first few riders which were strung out in a safe(ish) line.

Round and round we went. Eventually through the finish to see the 3 laps to go sign. I had been riding well within myself and had the feeling I was the strongest in this pack by a good margin. But how to orchestrate the win? Do-or-die break with 2 laps to go, that would be a 4 minute effort well into the red, or stick it out for the sprint and see what happens. I did the later.

Coming round with 400metres to go I was 4th wheel and ready to pounce. I just need to lift it for the line. Hmm. Not so simple. The pace was fast and I was already in towards my largest gear. A catalogue of mechanical errors, on which I can only blame myself, had left me in a situation where 50-14 was my largest working gear on the night. (Every cyclists needs an excuse)

200 to go and a big guy in Look Mum No Hands kit pulled out, he looked set for the win I just had to beat him to it. Bang bang bang on the pedals and he has a crank length on me. Bang, bang, bang, and it is half a bike length. I couldn’t pull in front and he slipped past for the win.

So next time you read a review of mine take it with a pinch of salt. I am after all still just a measly 4th cat.