Team Bath University-road.cc: Starting with a win in the 4th cats +video 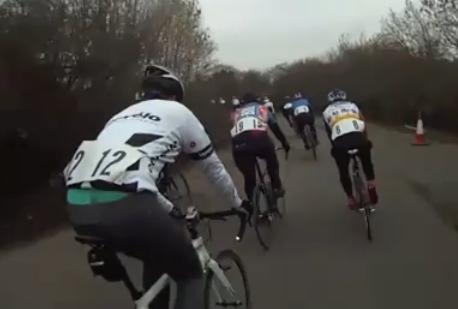 With the Tour Down Under kicking off the pro road scene, University of Bath team mates Liam Glen and our contributor Trev Allen thought it was about time to kick off their own roadie careers. Both being pretty proficient MTB racers, Expert and Elite respectively, but with no points on the road board things had to start from the bottom…

Off they went to the Upavon Winter Series, one of the most established winter series in the South for some 4th cat. action plus a bit of NeilPryde Diablo testing along the way.

Due to ongoing building work in Upavon, this year the series has moved down the road to the REME test track at the Ludgershall barracks. The fourths are off at 9:30am making it a pretty early start from Bath. Three races run every Saturday in the Upavon series and it is a pretty well organised affair by all accounts.
Here’s Liam’s report from the day out and some helmet cam footage of the 4th Cat action.

4th Cat Race:
16 eager riders lined up for the 4th Cat race which set off a minute after the ladies. The early pace was gentle and having only made it to the track 15mins before the gun we decided to just settle into a warm up. Once the bunch caught and passed the women, it felt only right to launch an attack through the mess. Wanting to race in the Severn Bridge E123 in March, I needed the points so Trev duly sacrificed himself to get me away. Up the false flat it was a shock to see a couple of riders still with us despite a big sprint (2:40 in the vid), we thought this was going to be easy?!?! Trev dropped back to the bunch and I pulled through. A quick peek behind me on rounding the bottom bend confirmed that two riders, Ben Boardman and Doug Hall, had bridged the gap and were firmly on my wheel. Luckily, both riders were willing to work and we kept the peloton at bay during the final lap. Going into the sprint, I found myself in prime real estate at third wheel and came round both riders to win by half a wheel, cue fist punch. Ten points in the bag and an upgrade to Cat 3 - job done. Trev won the bunch sprint for 4th.

3/4 Combined Race:
A quick trip to the portaloos and we were back on the start line for the Cat 3/4 race. With a larger field of 22 riders, it was much easier to sit in and conserve energy during the first few laps, despite the faster pace. Plus we had another Uni rider Seb Finch for company adding a little more experience in our line-up. It soon became apparent that a bunch sprint would be on the cards as nobody was taking responsibility for upping the pace, despite a group Seb was in having a cheeky dig. Having won the 4th Cat race, we agreed I would be Trev’s lead out man and we both envisioned a Mark Renshaw style delivery to the line for win 2 of 2.

Unfortunately, our lack of race experience reared its ugly head as we found ourselves completely blocked out and separated going into the final lap. After some desperate moves up the side of the bunch on my part, I found myself in third position as we took the final bend at full speed and commenced the sprint. Samuel Hayes came around me at an unmatchable speed on my compact and with a desperate lunge at the line I took a close third, Trev getting caught in a team Zappi tangle took 9th, bugger. Still a long way to go until we can rival the HTC sprint train, what would Phil Liggett have said!

Post-Race:
We had decided to make a day of it and get in a 60k ride post-race. A quick search on Mapmyride the previous night had unearthed what looked to be a route of appropriate length and elevation gain (or lack of it) which was promptly downloaded onto the GPS. Getting rides in on some new roads is always a treat.

Twenty minutes into the ride and we found ourselves effortlessly zipping along deserted country lanes – result! Even the bitterly cold winter air was not enough to dampen our spirits and the sun even managed to make an appearance. Two hours later however, and we found ourselves suffering into a howling headwind along what must surely be the longest and straightest road in the world. Brief respite was had when we found ourselves right in the middle of an Afghanistan training exercise with helicopters buzzing the road ahead of us, not your usually sights for a training ride.
Pretty solid day on the bike with two races and 2.5 hours knocked up afterwards, using mapmyride was definitely recommendable, and of course a good start to the season for Bath Uni/Road.cc.