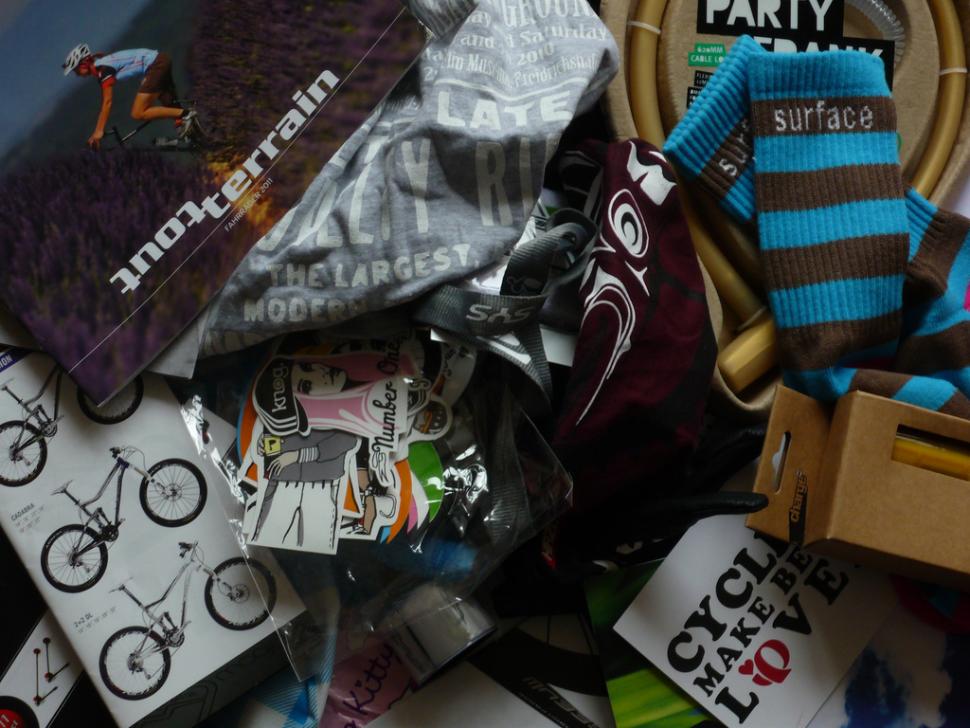 Landing back in reality with a soft bump after floating in the frictionless, non contact labyrinth sealed world of Eurobike for the last week a few sharp highlights emerge from the marsh-green blurry fug that only six men in a caravan can produce.

A rucksack full of brochures and business cards and freebies - t-shirts, socks, stickers, stickers, stickers, a water-bottle, some oil, more brochures, a set of Grippp gloves that I'd totally forgotten about from a company that were showing their product from a small table, a Tacx towel, a reflective trouser-band, a rainbow-striped sweat-band and a belt-buckle.

Getting to ride a right posh bike that made me giggle and detecting the subtle nuances between that and the next posh bike that just felt a bit 'meh', smooth smooth German tarmac, cats in fields and being overtaken uphill by an electric-powered downhill mountainbike.

Being squeezed between two other men in a bed, twice, isn't as bad as having to squeeze past Germans shaving their heads in the shower-block only to come face-to-er, face with others wandering about stark-bollock-naked, before breakfast. A breakfast of coffee, bread, ham and cheese, a menu that would perpetually loop for the three main meals of the day and many points in between. Leading to the unfettered joy of finding a banana, tears of happiness and vitamins.

Being two feet from Jens Voigt and not knowing what to say to him, but being polite enough not to lurch over and give him a great big hug. Whilst Vinokourov is just really rather small and no-one wants to talk to Frank Høj.

Getting excited by a touring bike and being the first person in the world to ride a  €10K bike, still quite light-headed about that actually, and getting overly worried about scraping the brand-new chrome toe-clips on tarmac.

A whole week trolling round a baker's dozen of show halls, stuffed with both wonder and tatt, über-technology and garage-bodge, becoming bike-blind so you don't really notice anything any more and it takes another set of eyes to point out the thing of beauty you'd walked past countless times before, and limping through the show as it gets packed away and seeing something you'd wished you'd spotted days before because it's so sweet and special. Despite spending 5 days looking, breathing, talking and writing bikes still not being jaded so that during a post-show beer by the lake your head is turned by every single bike that drifts past, the top-drawer mountainbike, the 1940's rod-braked black bike, the ratty BMXs, the clunky hire bike. Bikes.

And now the ecstatic relief of a scratchable itch to actually ride a bike rather than just stare at them. But first, a decent cup of tea, a meal with some roughage in and possibly something vegetabley that goes crunch, and then a good shave to turn legs grown hairy with walking into those of cycling.