Puppetry of the bike

“If it aint broke don’t fix it”, that’s what my dad used to always tell me. But some people just won’t leave things alone. I must admit, ignoring my father’s advice that I am a bit of a fettler but I don’t feel compelled to change something drastically, I just like tinkering with my bikes, a bit like girls doing their hair and make-up and stuff I presume.

At Eurobike there are 1000s of bikes, each competing for your attention so how do you stand out amongst enormous exhibition halls full of them? How can you change what has been about for a hundred years? Well, there's plenty of 'different' on show some people obviously think they have stumbled across something revolutionary and new, or maybe they were pissed up with a welding torch one evening and thought that it would be a laugh?

The bike that perplexed me the most was one that was parked up outside, clean and un-branded, definitely a prototype, freshly wheeled out from the back of a wagon and ready to make its entrance into the arena of the world’s largest cycle show. I took a sneaky photo of it then moved on as I was on a mission to gather spy shots while the show was being set up. Hours later when I went back to the press office to upload my images I stopped at that picture I had taken outside and I couldn’t work out why or what was going on with it.

Maybe it was a folding bike?

Or had some sort of suspension?

Or maybe you could propel it by jumping up and down on the saddle? – believe me, there are bikes here that do that.

I had to track down the designer; it would be the only way to solve this mystery, I could have discovered the most incredible design development to have happened to a bicycle since the inclusion of a chain. The very next day I was lucky enough to bump into the designer parading the bike around the show so I stopped and asked him about his glorious incarnation. “Well” he says, “by pushing a thumb lever at the handlebar the bike transforms from this... 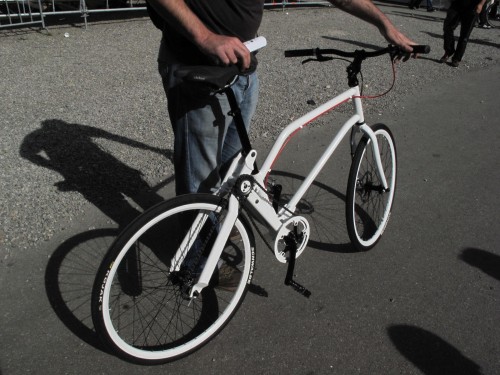 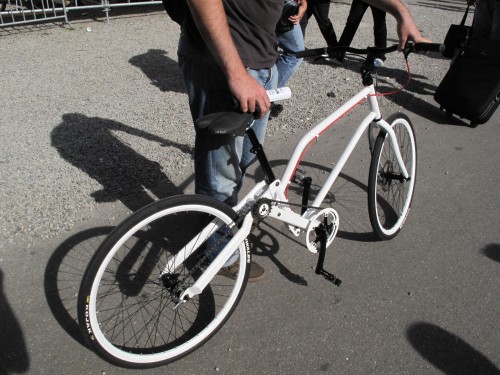 I grinned at him then moved away. Quickly.