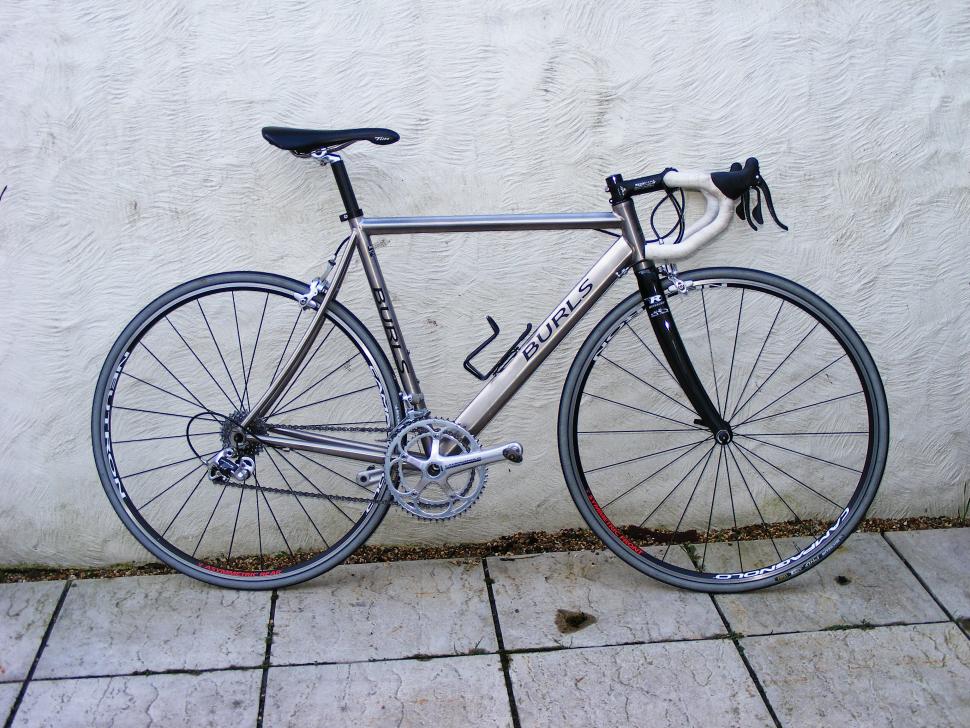 Justin Burls is tucked away in a quiet corner of Harwich. His background in classic vehicle restoration and metal fabrication have equipped him with an unsurpassed eye for detail, making the transition to bespoke frame building a surprisingly easy one. He still has his first frame-a TT mount built for his own sporting his trademark, super-smooth fillet brazing and deep, luxurious blue livery.

Self taught, he approached his first build with the notion it would take at least three or four attempts to produce something remotely ride able, although he clearly took to frame building like the proverbial duck to water and a continual, genuine modesty remained flowed throughout our conversation (a characteristic I’ve found typical amongst highly skilled craftspeople).

Designing engineering solutions is clearly his passion and he was somewhat amused by my fastidious polishing ethic-offering to wash and wax his battle weary, salt strewn-his second build which still retains a majestic air beneath the grime. His experience as a coachbuilder saw him finish his early framesets in cellulose topped off with clear epoxy two pack lacquer for durability. There’s no doubt this traditional method produces deliciously rich finishes but is very time consuming and labour intensive demanding acres of paint, sanded between coats. These days he concentrates on fabrication, outsourcing paintwork to Colour Tec. Leading me through his enormous workshop (Which is close to, if not larger than his house) it’s a long way from the polished glitz and glamour of the showroom but there’s a real sense of magic being performed here. A couple of track frames adorn the walls and rows of forks line the floor. In a corner sits an old Calor gas fire, goggles, gas welding equipment and a jig resembling a piece of medieval torture to the un-initiated.

Whilst enjoying a buoyant order book from the UK, Ireland and even as far afield as Finland and Canada, Justin has been importing some extremely fetching plain gauge titanium frames from a supplier east of Moscow. His wife, Mila, being Russian is pivotal in this side of the business). Having family in the former Eastern block, we found ourselves swapping stories from the region, tales of adventure, generosity of the people and sadly the corruption that remains rife.

These frames are offered in a choice of traditional road, single-speed mtb and of course road fixer. The latter strikes a good balance between track and road mount with drillings for brakes, one set of bottle mounts and clearance for 700X23 with guards. Titanium whilst expensive is in many respects ideal for winter duties given it’s corrosion resistance-after all, if it’s standard issue on Russian military submarines it’ll laugh at salt strewn winter roads. He used to offer a unicrown Ti fork option but the supplier’s lack of continuity coupled with his feeling that titanium is best as a frame material sees him plump in favour of carbon models.

Elsewhere there’s a Dawes Galaxy tandem on which he introduced Mila to the joys of cycling –it needs a light overhaul and a wheel rebuild so is momentarily out of commission. There’s also his faithful Raleigh M-TRAX MTB, which has been in various incarnations, once sporting big wide drops a’la my own 4130 framed MTB based rough stuff tourer. A chill coastal wind saw us return to the comfort of his front room where more frames, including a bespoke Columbus MTB for Mila crept behind televisions and sofas. We swapped ideas on the world of cycling and I waxed lyrical on the virtues of child trailers and tag-alongs-introducing children to the joys of life awheel from an early age whilst providing an excellent form of resistance training.

There’s a real sense of old world charm, a quiet interest in people and a striving for perfection which drives Justin and this arguably dying breed above financial gain. We’ve promised to meet for a ride sometime soon and the only downside to my visit is a sudden and irrational yearning for a Russian Ti road fixer!